British and Commonwealth Heavyweight champion David Price (now 15-0 13 KOs) came through the challenge of veteran Matt Skelton (now 28-6) with a 2nd round stoppage to retain his titles.

Skelton started aggressively in the first round charging his opponent and backing him onto the ropes. As he took a breather, Price started to box behind his jab and the action ebbed and flowed across the first stanza. 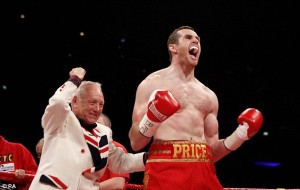 The second opened much as the first had with the only difference being a warning for Skelton for over exuberant use of the head from referee Richie Davies.

Skelton landed a hard overhand right on Price’s chin shortly after but it didn’t connect cleanly and didn’t appear to trouble the Liverpudlian who replied with a right hand bomb of his own prompting Skelton to raise his arms in triumph at having taken it so well.

Late on in the 2nd, Price switched to a body attack and then landed a hard right hook to Skeltons head before continuing to pummel Skeltons ribs. He landed a couple of final spiteful body hooks but the head shot seemed to have done the damage and Skelton crumpled and remained slumped on his knees with gloves on canvas and failed to beat the count. His corner had thrown the towel in as their man had started to go down but the referee hadn’t noticed.

In the post fight interview Price and promoter Frank Maloney suggested that next up would be a top American opponent in February. Tony ‘The Tiger’ Thompson, who has had a couple of cracks at Wladimir Klitschko the most recent being in July 2012, has been mentioned.

Team Price are then looking at at third and final British title defence against Dereck Chisora before hopefully a mega fight against main domestic rival Tyson Fury who they hope will be sporting a world title by that point.

Maloney offered to pay £650,000 into an escrow account for Fury to get into the ring against his charge. A slightly crass move, rather characteristic of Maloney and to be taken with a large sack of salt given the fact that Maloney has a creditors meeting in respect of his promotional company FTM (Sport & Entertainment Management) Ltd and was also the subject of a tweet by British light welterweight Dale Miles who complained that he hadn’t been paid 5 weeks after a bout contrary to British Boxing Board of Control rules that stipulate fighters should be paid within 7 days.

All that aside, Price has extremely heavy hands and his 6ft 8″ frame gives him an obvious advantage against most opponents. He noted in a pre fight interview that Skelton had only ever been stopped with body shots and intelligently switched to that strategy to end his opponent faster than anyone else ever had.

Job done. He marches on.

Fury is the fight the British public want to see. We can wait a while longer. Especially if it becomes a domestic world title bout.