Saturday night from the MGM Grand in Las Vegas, Manny Pacquiao and Juan Manuel Marquez will do battle for a fourth time.  Very few rivalries in boxing reach a fourth encounter.  The sport has seen plenty of trilogies but, it is rare two fighters require a fourth fight. However, that is what has occurred between the exhilarating Filipino and the rugged, technical Mexican.  Through three fights they have settled nothing.  Manny is up in the matter with two wins and a draw, but each contest is so hotly debated that at this point neither man can claim they are ahead. 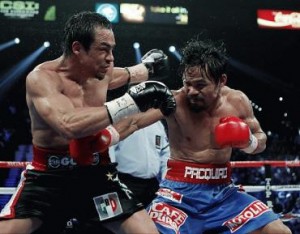 So, without a real victor in the three bouts, they will go again.  One more time, the beloved Manny Pacquiao will try to impress upon the world that he is the superior fighter while Juan Manuel Marquez will continue his quest to come out ahead over a nemesis who always seems to get the better of him in the eyes of the judges.

The story of these two fighters has been well told.  A crazy first fight where Marquez came back from being floored three times in the first round to fight back to a draw.  A second fight– so close it is one the most hotly debated decision of all-time– where Pacquiao got a one point split decision win.  Then a third fight that is even more controversial than the previous encounters where again Manny got a close split decision win.  These two could probably fight twenty times and boxing fans and media would still hotly debate each bout.

So the immediate question is who will come out ahead in the contest this weekend.  Well, the answer is as simple as stated in the title.  This just may be Marquez’s time.  For multiple reasons this will be the night when the Mexican, who is a sure bet hall of famer, will finally get his hand raised against his greatest foe.

For starters, sympathy will be on Marquez’s side.  Many experts believe he deserved to win all three of the previous bouts and got shafted each time.  While judges are supposed to be impartial, it is hard not to factor in that Marquez has gotten the short end of the stick each time and deserves his moment in the sun.  Simply put, close rounds will go to Marquez this time.  Considering almost every round with these two is close, look for Marquez to pull ahead on all three cards.

Then there is the dedication and motivation angle.  Pacquiao is a great fighter but the simple fact is that he no longer is 100% about boxing.  He has his political career, his religious interests, and numerous other distractions.  He trains in various locations, finishing up in his old stomping ground at the Wild Card.

Marquez may be thirty nine years old but he still eats, drinks, and sleeps boxing.  Marquez feeds 24/7 on the art of fighting.  The only side project he has from training is co-hosting a show on ESPN Deportes, “Blow by Blow.”  So, basically, when this guy is not boxing in his own life he is analyzing other fights.  The man is one track minded on boxing unlike his opponent who is pulled in twenty different directions.

Finally, Marquez is a rough and tough Mexican who has his last shot at defining his legacy.  Marquez will not be able to die much less retire without conquering the hurdle that is Manny Pacquiao.  The intelligent ring technician with a heart the size of Mt. Everest is ready to die in that ring to conquer the one hurdle that has eluded him for so long.

It all adds up to a win for Marquez.  He is more dedicated.  He is more ready.  He has the sympathy and sway on his side.  I am not a betting man but if you are, the bet is Marquez.  It is finally his time, his place, his moment.