I had to take the time to get up on the soapbox today, and in a nice bit of irony, it is not because a boxing writer pissed me off but because one I respected made me look inward at what is perhaps a philosophical difference.

In this week’s excellent Monday Rant, our esteemed Fearless Leader Paul Magno took on the gladhanding, 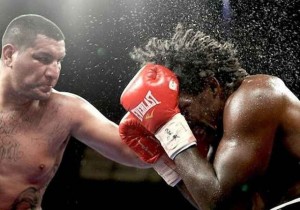 self-absorbed, talentless “boxing media”, the people who write not because they have something to say but because they want to feel important. It got me thinking—why do I write? With a new year dawning and resolutions perhaps already broken before they’re made, it might make sense to examine this, especially since starting tomorrow night, my regular beat is going to be taking up so much of my mental energy until August.

The simplest answer is that I write about boxing because I am a boxing fan. Specifically, I enjoy the product that ESPN puts on every Friday night, enough so that I haven’t simply said “screw this, there’s basketball on and I’d rather be watching that.” Those who know my loving devotion to the NBA understand just what a sacrifice that is, shifting my attention to the Sweet Science on Friday nights.

I got my start in this gig because I was active on the FNF Facebook page, talking boxing and cultivating friendships with fellow fans of the sport, trying my hand at being informative and interesting (and, by bizarre grace of the gods, mainly succeeding in that aim, which continues to surprise me even as I become more experienced and practiced at the art.) I don’t care about the internal politics of the sport except insofar as it affects the product between the ropes. If a prospect’s handlers want to match him with a banana slug, I’m going to call them out because those fights aren’t any fun to watch. If big-time power players want to keep the best fighters of our time from fighting each other (Floyd, Richard, Manny, Bob, looking at all of you), I’m going to say something. If the boxing “media” get so self-absorbed that they detract from the fans’ ability to enjoy the product in the ring or if they take potshots at the integrity of the site I write for, they get their time in the crosshairs.

But at the last, I write about boxing because I want to write about two men standing in the ring attempting to murder each other with their fists. At the end of the night, nothing else matters. So that’s what you’re getting for a third season here on the Boxing Tribune; Friday Night Fights coverage that comes straight from the soul of a guy who loves to watch FNF and see the up-and-coming prospects make names for themselves. My only “agenda” beyond that is my continued dream that someday ESPN will hire me to do Bernardo Osuna’s job or otherwise set me up in the co-host’s chair the way Max Kellerman got his start alongside Brian Kenny over a decade ago (Kellerman himself earning the nickname of “yappy dog” from your columnist’s girlfriend at the time.)

I’ve never understood this need that writers have to “be the story”. I covered an event live at ringside in Reno a few weeks after getting this gig, and frankly I’m not sure what makes it so damn special when for a hundred bucks, any fool could’ve had seats at least as good as what I had on press row. The media spread is just food, and in a casino town, it’s not like a buffet is some kind of exclusive deal for people who are in the boxing media—indeed, patrons of the Eldorado Casino across the street from the fight venue could hobnob with Chris Arreola their ownselves if they really felt the need. I wasn’t a big shot, and there was no reason at all for me to write about anything other than Arreola’s beating the shit out of Kendrick Releford for seven rounds.

I got to meet Teddy Atlas, sure, and on a personal level, meeting one of my heroes as a fan was a great thing, but really, is anyone supposed to be impressed by that? Yeah, there’s a picture on my Facebook page (and a tip of the hat to Erik Killin over at BoxingBB.com for taking the picture with his camera and posting it online), and yeah, I do get to name-drop “hey, I met Teddy Atlas” when talking to people about being a sportswriter (not that most women I meet and/or date know who Atlas is, not when they first meet me at least), but I am not so far up my own ass that I think this makes me a celebrity by proxy.

So what will you get in 2013 from your columnist? Simple. You’ll get fight previews that introduce people you may not have heard of and remind you of people you have if you’re a regular FNF viewer. I write from the perspective of believing my audience is people like me who watch the ESPN show every week (or at least most weeks). I’m leaning toward making more definitive predictions, if only because it’s always fun to be right, and it’s even fun in its own way to be wrong and get hilariously called out by fans of the guy I predicted would get knocked out.

You’ll get fight recaps that tell you who won…and tell you how and why. It’s not enough to say “Joe Shlabotnik won by fifth-round TKO over Harry Scrubmuffin.” If Shlabotnik carried the action, if he landed a killer left hook, if he got in a lucky shot despite being way behind on the cards…if you just wanted to know who won and in what round, that’s what Boxrec is for. From the main event to the swing fight four-rounder, you’re getting quality coverage in which I stay the hell out of it personally—you know, actually putting the second word into “boxing journalism.”

And on Thursdays? My mission remains the same every week. I write stuff that my mother can enjoy even though she’s not a boxing fan. Sometimes that means I tell personal stories, sometimes that means I crack dick jokes, sometimes that means I come up with some insight from an angle nobody thought of before. It’s a grab bag, and this year I’m really hoping to more consistently deliver stories that are worth reading. Thanks for sticking around for 81 episodes (so far, including this one). In the words of Tony Kornheiser, “that’s all for this time, we’ll try to do better the next time.”

Fox Doucette covers Friday Night Fights for The Boxing Tribune. His weekly column, The Southpaw, appears on Thursdays. Fan mail, hate mail, and ideas you’d like to see in this space can be sent to beatcap@gmail.com.