The story of Manti Te’o and Lennai Kekua is a perfect example of a scandal that didn’t have to be. It began as a heart-breaking tale of loss. That loss became the inspiration and drive that fueled Te’o to lead Notre Dame to an undefeated record and an appearance in the National Title game against Alabama. Big media outlets such as ESPN and Sports Illustrated ran with the story despite never once verifying an obituary, a death certificate, or so much as even a 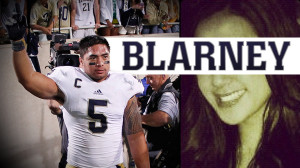 record of enrollment for Lennai Kekua at Stanford University. Regardless, it was the feel-good story of 2012, providing a touching back story to one of the leading candidates for the Heisman Trophy. After Deadspin did a bit of digging and asking actual questions based on rumors surrounding the validity of Te’o’s story, that story has now been shown to be no more than an elaborate lie, of which Te’o may or may not have been a party to.

With Notre Dame officials and the Te’o family backed into a corner by the great work of the guys over at Deadspin, they’ve gone into damage control mode and are now fighting their way out of that corner with the powerful backing of ESPN. And the PR push seems to be working with great effect. ESPN was one of the leaders in helping to publicize the myth, and now they’ve gone the extra mile to unequivocally paint Manti Te’o as the amicable, good-intentioned, unwitting, eternally trusting victim of a hoax by young rapscallion, Roniah Tuiasasopo. Te’o’s private, non-televised interview with ESPN was handcuffed by conditions and restrictions set by agent Tom Condon. There have been few willing to point out the obvious, but have instead focused their energy on tearing down the guys with the balls to break the story. A taped interview with Katie Couric, where you won’t expect the real tough questions to be asked (unless you’re Sarah Palin and haven’t read a book since “Everybody Poops”) is scheduled to air on Wednesday night.

ESPN, dubbed “The Worldwide Leader in Sports”, is anything but independent. Broadcast partnerships with NCAA conferences, commercial campaigns featuring select athletes, and endless loops of unimportant minutiae about the flavor of the week are symptoms of an organization dependent on earning its revenue from the subjects it covers when it should have impartial relations. Too often we see the media broad-jumping over the line between journalist and publicist, in all sports. We’re told who to admire, who to watch, and why we should think they’re the greatest thing since sliced bread.

Notre Dame was more interested in secrecy and protecting their legend than discovering or sharing the truth, and the media was more than happy to oblige. It took Deadspin, whose motto is “Sports news without access, favor, or discretion” and is truly willing to challenge the status quo, to take tips of a hoax and actually look into the possibility that we were being sold a big steaming pile. The big media guys seemingly buried those tips in the interest of not distracting from the big spotlight shining on Notre Dame being dragged kicking and screaming out behind Alabama’s wood shed. But for all their hard work, the PR push by ESPN, Notre Dame, and the Te’o family has led to attacks on the credibility of Timothy Burke and Jack Dickey (the story’s co-authors) over at Deadspin.

The media in boxing is no different, if not much worse. We see the unfair, biased coverage often in boxing. As pointed out in Magno’s Monday Rant, the double standard in handling Gennady Golovkin and Saul “Canelo” Alvarez is obvious, yet ignored by most. These types of situations are common, and those who call bullshit when they see it are discredited and shunned. Or in the case of a few of us here at The Tribune, we’re attacked by post-pubescent teenage girls masquerading as boxing writers with a Twitter addiction.

If you’re a regular visitor to this site you’ll probably be aware of this site’s mission to point out the flaws in a media system funded by the subjects it covers. If you’ve stumbled here because of my SEO-capitalizing headline, then this may be news to you. The Boxing Tribune pushes for an independent media. It is fair to the fighters who turn their brains to mush and it is fair to the fans, even those who watch with open mouths and dried nacho cheese under their fingernails.

Dishonesty from the media is unfair to the fighters who may not be backed by the big power brokers in the sport and get left in the dust of a lesser fighter with a bigger media push from a big promoter. It’s also unfair to the fans, many of whom don’t recognize when they’re being duped. But it isn’t only boxing that needs an independent media, it is all forms of media. From the conflicting “facts” on MSNBC and Fox News, to the sensationalized sports media producing tear-jerking pre-game profiles to get us to care about factors outside of the game that should be ignored, it’s all anything but real information.

The scandal that didn’t have to be came about because of the complacency of the media. The media is complacent in its current role, so dependent on its current revenue stream and unwilling to change. Now that the cat is out of the bag, the discussion has been twisted. We shouldn’t be sympathizing on the supposed victim, we should be focusing on the fact that the girlfriend never existed and the media was too lazy to find out. But without independent media, discussion will always sway towards a touching bullshit narrative and the money.