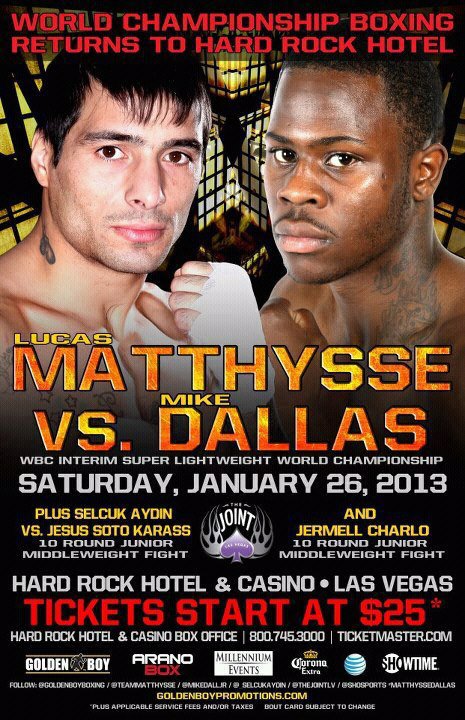 Matthysse comes in to Saturday night’s fight with his stock rising. Now considered one of the top 140-pounders in the world, Matthysse stopped the previously unbeaten and extremely durable Ajose Olusegun in ten rounds of a scheduled twelve. Olusegun took everything Matthysse had to throw at him, but in the end, Matthysse was just a bit faster, stronger, and his punches landed first. Both of the losses on the ledger of Lucas Matthysse have come by way of close split decision; first to Zab Judah in 2010 and then to Devon Alexander in 2011. Matthysse owns stoppage wins over DeMarcus Corley and Humberto Soto since the losses, in addition to the aforementioned stoppage win over Olusegun.

Dallas is a regular on the Friday Night Fights circuit who turned pro in 2008. The two losses on his record came in back-to-back fights in 2011. The first was a 7-round KO loss to Josesito Lopez in January of that year, and his second loss, a fight many felt he should have won, came by way of a majority decision loss to Mauricio Herrera in June. Dallas bounced back with two wins against Miguel Gonzalez and Javier Castro in 2012.

Dallas is the better boxer of the two. Some might call him “slick”, but he falls just short of the classification in the eyes of most. He is tall and moves well while sticking his jab in his opponents’ faces. He works angles well and has good foot and hand speed, which he uses to stay at a distance and catch his opponents off balance and before they can set up their offense.

Matthysse doesn’t have very fast hands, but he’ll throw his right hand behind a jab, catching his opponents off guard. He has great timing, which helps make up for his less-than-stellar hand speed.  His best punch is his right hand, which he can throw straight down the middle or loop around a straight guard. His left hook carries some pop as well, but it is more of an arm-punch at times when he fails to turn it over all the way. Matthysse will be there to be hit, but he uses his guard well to deflect a good number of punches. As noted earlier, Matthysse carries a lot of power in both hands, and that was evident in his punishing victory over Ajose Olusegun in his last outing.

Dallas will need to be at his absolute best on Saturday night. If he isn’t able to keep Matthysse flailing at air then he will be in for a short night. Matthysse will stalk Dallas, looking to time him to compensate for Dallas’ greater speed. If Matthysse is able to land as heavy and as often as he did against Olusegun, he’ll score an easy knockout within seven rounds.

Expect Dallas to be just out in front over the first few minutes, with Matthysse landing one or two big shots early on that will make Dallas alter his game plan. Matthysse’s greater experience and power will carry him to a stoppage victory in the seventh round, and might possibly put him in line for a shot at rightful WBC junior welterweight (and WBA) champion Danny Garcia.