Adrien “The Problem” Broner (26-0, 22 KOs) made good on his promises to make short work of his opponent on Saturday night when he stopped a gutsy Gavin “The Rock” Rees (37-2-1, 18 KOs) in five rounds on Saturday night at the Boardwalk Hall in Atlantic City, New Jersey. And on the undercard, Sakio Bika scored a decision win over Nikola Sjekloca to earn the number one contender spot to the WBC’s super middleweight title, currently held by Andre Ward. 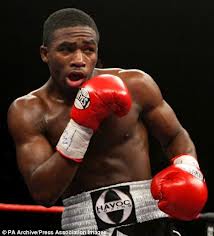 Adrien Broner, who was an 80-1 betting favorite, came out content to stick an occasional jab in the face of an aggressive Gavin Rees. Rees swarmed early, showing flashes of hand speed and a mixed up-and-down attack. Broner waited until the second round to throw a punch with any conviction, but was outworked by Rees for the second consecutive round.

Going into the third round, Rees lead on The Boxing Tribune’s scorecard, but that lead would shrink when Broner decided to open up and get offensive. A hard right counter uppercut sent Rees down for a quick seat midway through the round, but he recovered well and made it out of the round.

With Broner content to clown for the crowd, pot-shotting Rees with lead right hand bolo punches, Rees started into a pattern of retreat. But Rees wasn’t going to give in so easy, as he kept throwing and landing against Broner, who was content to stand in the pocket and trade with the shorter Rees.

The beating continued into the fifth round before a thudding left hook to the midsection forced Rees to take a knee and a count. Broner smelled blood and jumped on Rees. After several unanswered punches, Rees’ trainer, former middleweight world title challenger Gary Lockett, climbed up onto the ring apron waving the white towel. According to HBO’s Punch Zone graphic, Broner landed 112 shots to the head, and 148 overall, in five rounds.

In the co-main event, Sakio Bika (31-5-2, 21 KOs) outworked the untested Nikola Sjekloca (25-1, 7 KOs) to secure the right to challenge Andre Ward for his WBC super middleweight title. Bika started out way ahead of Sjekloca, staggering him with a series of hard shots in the second round. After the finishing that round on wobbly legs, Sjekloca got back to safer ground in the third, and even had his best moment of the early rounds in the fourth. But the table cloth was ripped out from under his tea party by a hard counter right hand that staggered Sjekloca again.

Bika stayed on top of Sjekloca through the middle rounds, loading up on almost every punch he threw, and missing wildly with many of them. Sjekloca hung around until Bika was forced to take a rest in the eighth and ninth rounds. It was then that Sjekloca had his best rounds of the fight. It wouldn’t last long, however, as Bika would open back up and control the last three rounds.

Edner “Cherry Bomb” Cherry (31-6-2, 17 KOs) stopped former world title challenger Vicente Escobedo (26-5, 15 KOs) in the sixth round of a scheduled ten.  Escobedo was the favorite going in, but he hardly fought like it. Cherry, long forgotten as a viable player on the big scene, controlled the pace of the fight and forced his will upon Escobedo.

A left hand to the body followed by a right hand to the chin dropped Escobedo in the second round. Escobedo would beat the count and make it out of the round alive. Escobedo tasted the canvas twice in the sixth round, the first, a repeat of the left to the body-right to the head combination nearly put Escobedo down for the count. He made it to his feet at the count of 9-and-three-quarters, but wasn’t able to withstand a quick barrage before the bell. As the bell rang to end the round, Escobedo fell forward, fording the referee to stop the fight at the 2:59 mark of the round.

Demetrius Hopkins (33-2-1, 13 KOs) also notched a victory on the undercard, beating Charles Whittaker (39-14-2, 23 KOs) by way of corner stoppage after the sixth round of a low-action fight. Hopkins scored a knockdown in the fourth round, but never pressed for the stoppage. The end came when Whittaker’s corner complained of impaired vision as the reason to stop the fight.