Saturday night will be another potentially history making night for 48-year-old Bernard “The Executioner” Hopkins (52-6-2, 32 KOs) when he makes a run at Tavoris “Thunder” Cloud (24-0, 19 KOs) and his IBF light heavyweight title. Hopkins-Cloud headlines a solid night of fights, with Keith Thurman and Jan Zaveck serving as the co-feature, at the Barclay’s Center in Brooklyn, New York. The fights will be televised live on HBO World Championship Boxing, starting at 9:30 PM ET/6:30 PM PT. Despite Cloud’s status as a title holder, neither man is coming in with much momentum. 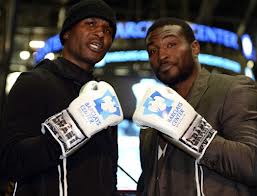 After a decade-long title reign at middleweight, which included a brief period where he held all four major title belts, Hopkins lost a close split decision to Jermain Taylor. A loss in the immediate rematch preceded Hopkins’ second career up in the light heavyweight division where he beat then-number one Antonio Tarver in his first fight. Hopkins won his first alphabet title, and became the oldest world titlist in history, when he beat Jean Pascal for the WBC title in May 2011. In his fight with Pascal, Hopkins fought like a much younger man. While waiting for an exhausted Pascal to get up from his stool before one round, Hopkins dropped down and started doing pushups to show an opponent 18 years his junior. Since turning back the clock against Pascal, Hopkins looked less than stellar in an aborted 2-round no contest and 12-round unanimous decision loss to Chad Dawson.

Cloud comes into Saturday night’s title defense riding a trend of inactivity and a fight in which his opponent should have had his hand raised at the end. After taking a unanimous decision victory over Clinton Woods to take the vacant IBF light heavyweight title in his only fight of 2009, Cloud managed to fight twice in 2010, winning decisions over Glen Johnson and Fulgencio Zuniga. A June 2011 TKO victory over Yusaf Mack was followed up by a tepid performance that ended in a controversial split decision victory over former light heavyweight belt holder, Gabriel Campillo.

Bernard Hopkins style doesn’t always lend itself to thrilling fights. To the purists, the little things he does are a sight to behold. Hopkins is a master tactician, using the most basic tenets of ring generalship to walk his opponents into lead right hands that a fighter nearing 50 shouldn’t have any business throwing and landing. He uses his years of experience to step laterally and score with quick shots while his opponent is still turning, and one would be remiss to not mention the extracurricular activities on the inside. It is the subtle roughhouse tactics on the inside that many critics of Hopkins point to. He’ll shoot in after landing a right hand and follow it up with a headbutt or shoulder while he goes for the clinch. Hopkins is also a capable counter puncher, and Cloud will be wide open to be countered all night.

Tavoris Cloud is young, undefeated, and powerful and he has a good knockout percentage against lower-level opposition. He’s only scored one knockout win since winning the title in 2009, and as Campillo showed, when Cloud isn’t dominating and imposing his will on his opponent, he is vulnerable.

To put it simply, Tavoris Cloud is the type of fighter built for Bernard Hopkins. He’s strong and physically imposing, and he carries a big punch into the ring with him. Hopkins is vulnerable to a fighter that will swarm him and overwhelm him with volume punching, and to fighters that won’t present him with many opportunities to capitalize. Tavoris Cloud is neither. Despite being a big puncher, he isn’t overly active. Cloud is also wild when he opens up, and his footwork will work against someone who will give him as many angles as Hopkins. Cloud looked horribly ineffective against Campillo when Campillo went on the offensive, and he’ll do the same when he isn’t able to put Hopkins away early. It would be easy to count Hopkins out after his loss to Dawson, who fights with a style that will always make Hopkins look bad. But Cloud isn’t Dawson. Cloud will win a few of the early rounds, but when Old Man Bernard is still there, smiling, pot-shotting, and kidney punching him in the referee’s blind spot, he’ll fold again. Hopkins will frustrate Cloud and take control in the second third of the fight, and take a 115-113 split decision victory to become (yet again) the oldest boxer to win a world title belt.

The undercard will feature undefeated knockout artist Keith “One Time” Thurman (19-0, 18 KOs) taking on former IBF welterweight titlist Jan Zaveck (32-2, 18 KOs) in a WBO welterweight title eliminator. Thurman is coming off a stoppage win over Carlos Quintana, a former welterweight title holder who dealt Paul Williams the first loss of his career. Zaveck returned to Slovenia after losing his title to Andre Berto in September 2011. He won a 12-round unanimous decision over Bethuel Ushona in his return.

Zaveck is a tough and rugged fighter. Despite losing his title via TKO to Berto, he was never visibly hurt in their fight before succumbing to several cuts over and around his eyes. He’s at his best on the inside, where he throws a decent uppercut and left hook downstairs.

Thurman handled a former world title holder in his last fight with ease, but Quintana has been knocked out several times before and he’s at the end of his wick. Thurman stalks his opponents and breaks them down with heavy hands and a relentless attack, and he won’t deviate from the plan against Zaveck.

This should be a good co-feature, with two fighters with similar killer mentalities butting heads. Thurman is on the way up, while Zaveck has already reached his peak on the Slovenian club scene. Look for Thurman to give Zaveck all he can handle and more, but Zaveck will see the final bell and be the second man to do so in a losing effort to Thurman.