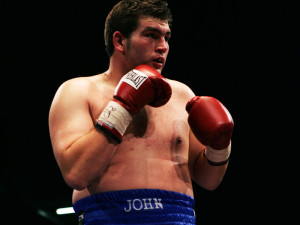 Eight years ago Skelton was a thirty-something (no-one really knows) boxing novice with an unbeaten record and a hard-man reputation forged in a variety of combat sports. McDermott was (and continues to be) a boxing enigma- decently talented but with a Galento-like physique and McCall-like fragile temperament. Back then Skelton blasted the Londoner out in less than three minutes.

A lot of water has passed by since then, and the two fighters are no longer at the forefront of their division in the UK or anywhere else, and yet the return match retained a certain amount of intrigue. Both McDermott and Skelton had been in the last 18 months victims of the since-defeated David Price (and may be now regretting that they didn’t trade more on Price’s now exposed frailty round the whiskers) and the winner of this evening’s counter will doubtless seek to re-enter the British heavyweight scene.

McDermott won by scores of 97-93 and 97-94 (twice). He was at every turn a step ahead of the ageing Skelton, who was as ever earnest and willing, but Skelton’s reflexes are entirely shot, and he simply couldn’t deal with the younger man’s superior speed and skills.

McDermott remains Tyson Fury’s toughest opponent, having lost a hotly disputed decision to the big Irish hope two years back, and he’ll continue to be a respectable opponent for the burgeoning group of British heavyweights coming through – but that’s about as far as he’ll go.