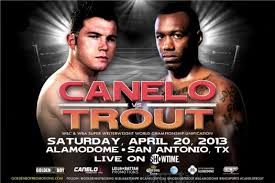 This will be the first major Golden Boy Promotions fight card put on by Showtime since their public breakup with HBO last month, and will have to compete with the results of a short run of entertaining fights put on by Top Rank and HBO, the components that make up the other side of boxing’s most bitter rivalry. Alvarez is a proven attraction and potential future superstar whose last several fights have all been big events: 1.036 million viewers against Josesito Lopez last September, Mayweather-Cotto undercard, and 1.469 million viewers against Kermit Cintron in 2011. He’s a huge draw in Mexico with a growing presence in the United States who can draw a crowd and is never in a dull fight.

The often-active Alvarez has been inactive since a five-round drubbing of junior welterweight Josesito Lopez last September. Lopez got the fight after he spoiled the plans for a proposed Mexican Independence Weekend fight between Alvarez and Victor Ortiz. His reward, however, turned out to be a nightmare. Without having to worry about his opponent’s power, Alvarez walked through everything Lopez threw at him, sending him down three times from body shots in the fight. Since winning the vacant WBC junior middleweight title in March 2011, Alvarez has made five title defenses against mostly hand-picked opposition. Ryan Rhodes, the mandatory challenger at the time, came up short over twelve one-sided rounds in Alvarez’s first defense just three months later. Former welterweight title challenger Alfonso Gomez (TKO 6) got his turn in September of that year, with Kermit Cintron (TKO 5) becoming Alvarez’s last victim of 2011. In Alvarez’s last fight before his win over Lopez, he dominated a badly faded Shane Mosley on the May 5 undercard of Mayweather-Cotto.

For all the criticism pointed at Saul Alvarez for his light resume, Austin Trout’s resume reads just as thin. Trout enters the third year of his title reign, while also being only three years removed from fighting journeymen and club fighters across North and Central America. Trout won the vacant WBA junior middleweight title by a unanimous decision victory over Saul Alvarez’s older brother, Rigoberto Alvarez in February 2011. Trout ramped up his level of competition in 2012, however, winning decisions over Delvin Rodriguez and former three-division champion Miguel Cotto.

Alvarez is an accurate power puncher who likes to attack the body. He won’t waste punches flailing at air, and he has shown he can pull the trigger and jump at quick opportunities. He isn’t very fast on his feet and he will have to work to cut off the ring to limit Trout’s movement. Alvarez’s left hook is his best punch, and he’s as effective throwing it to the head as he is throwing to the rib cage. Defensively Alvarez is nothing special. He holds his hands high and moves forward working from behind the jab while moving his head just enough. In his fight with Alfonso Gomez, Alvarez experimented with a shoulder roll defensive strategy, but he was hit more than he should have been by a smaller fighter.

Trout is a somewhat slick southpaw who likes to give his opponent plenty of angles to work against. He tends to timidly slap with his jab and he isn’t a very accurate puncher. He has fast hands and throws just about every punch there is effectively, but not great. He’s a fighter who depends on movement and his activity to win. He moves to a spot and throws combinations while his opponent is still looking for him and unable to set up.

The winner will be determined by whose strengths shine over the other (obviously): Alvarez’s accurate power punching and determination against Trout’s movement, angles, and defensive flair. Against Cotto, Trout was able to keep him in pursuit and land before Cotto had a chance to set his feet and land. He was never very stationary. For Trout to win on Saturday night he’ll have to hope he can hold out against the similar style of Alvarez, but on younger, stronger, and more determined legs. Having gone back and forth with my prediction, I’m settling on a Saul Alvarez decision win. He’s a lot younger and possibly stronger than Cotto at this point in his career, and he’s able to walk through a lot more fire to get at Trout. He’ll also be able to cut off the ring and slow him down. Lastly, this fight is in Texas, where the house fighter rarely loses, so look for a unanimous decision victory for El Canelo.