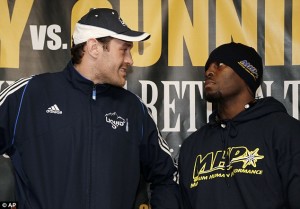 Named after Mike Tyson (yes, it’s true), Fury, of Irish Traveller heritage, has a family history in boxing that dates back to the bare-knuckle era. His father John had a short stint as a professional fighter, and his cousin Andy Lee is a world ranked middleweight. Prior to taking to the pro ranks, Fury won 31 of 35 amateur bouts, a national ABA championship, and a bronze medal at the World Junior Championships.

As the current Irish heavyweight champion, Fury is facing his toughest and most accomplished opponent to date and coming in as the betting favorite. He’s the younger and more powerful of the two, and holds the size and height advantage. In his last outing, he easily defeated Kevin Johnson in a near shut out over 12 rounds, though many felt Johnson had a superior skill set and would win the bout. Fury has also beaten the likes of Dereck Chisora, John McDermott (twice), journeymen Vinny Maddalone, and Martin Rogan. Over the last two years, he’s stopped five of his seven opponents though the two fights that went the distance were against higher quality opposition.

He’s been very outspoken about his plans for Cunningham, calling this a “three hit fight”: “I hit him, he hits the floor, Tyson Fury hits New York”. He even went so far as to say he wanted to rent ad space on the bottom of Cunningham’s boots, since that’s what everyone will see on fight night. While he’s known as a solid, but not necessarily devastating puncher, he does hold a distinct natural size advantage so his prediction may not be far off. In the end his goal is simple: like every other heavyweight, he wants to fight a Klitschko. Fighting on national television in the United Sates in a good start, but he still needs to get past Cunningham, which is no easy task.

Steve Cunningham is by far the most accomplished and talented fighter Fury has faced, and Fury has acknowledged this. The U.S. Naval veteran is a two-time cruiserweight world champion, that made the move to the heavyweight division after suffering back to back losses to Yoan Pablo Hernandez that cost him the IBF cruiserweight belt. His heavyweight debut was successful; a 10 round decision over journeyman Jason Gavern that was followed by a highly controversial loss in a rematch with Tomasz Adamek in December.

Overall, Cunningham has faced the better opposition than Fury: Krzysztof Wlodarczyk twice, Marco Huck, Troy Ross, and Wayne Braithwaite to name a few, but those were all cruiserweight fighters, guys that don’t hit nearly as hard as Fury will and with Cunningham’s history of being dropped, one has to wonder how he’ll fare when Fury lands a big shot. He can give Fury fits with his hand and foot speed, but if he’s caught clean, he’s in trouble.

It’s your standard bout of youth and power vs. speed, skill, and experience. While the general feeling is that Fury will eventually catch up with Cunningham and stop him inside the distance, a decision win for Cunningham isn’t out of the question.

Stevens is two fights into his comeback: after suffering a decision loss to Jesse Brinkley in 2010, he took two years off but came back strong in early 2012, stopping Romaro Johnson in the first round. After another yearlong layoff, he came back in January of this year with another first round stoppage by knocking out Elvin Ayala. The victory earned him the vacant NABF middleweight title. He’s a fast starter with good hand speed and a left hook that can end a fight at any time: 14 of his 17 knockouts have come inside the first two rounds.

Derrick Findley is a former Indiana State middleweight title who been on a downward slide over the last two years. He’s lost to the likes of Fernando Guerrero, Matt Korobov, Andre Ward and Andre Dirrell, but Dirrell was the only one to stop him inside the distance. He last fought in February, losing to J’Leon Love over 10 rounds.