A common complaint about modern boxing is that too many of the biggest stars in the sport have it too easy. The money that flooded the sport and exists today has created a business model that has guys brought up being fed a steady diet of pugs he’s sure to beat. That guy is always the star, and the opponent is nothing more than an opponent, brought in to lose in a loud and spectacular fashion. And that isn’t to say that any professional boxer out there has it easy – least of all not easier than anyone pounding angrily away at a keyboard or blowing hot air on any podcast that comes down the pike. But some guys are groomed for the big stage from the get-go, while some have to fight for every inch of real estate they gain. Lamont Peterson and Lucas Matthysse, who will do battle in a 141-pound catchweight fight on Showtime Championship Boxing this Saturday night at 9 PM ET/6 PM PT, are two fighters who fall into the latter category. 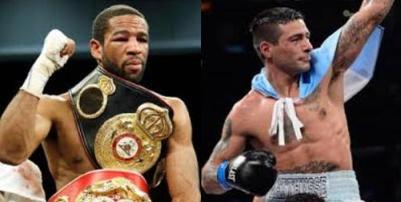 Peterson is a guy who can come to the ring with “Started From the Bottom” playing during his ring walk and not be accused of hyperbole. Once homeless, Lamont Peterson took the long way to the top of the junior welterweight division. Peterson has spent his entire career as the B-side in his big fights. His first shot at junior welterweight gold came in 2009 when he challenged for Timothy Bradley’s WBO strap. Peterson got up from the canvas to see the final bell, but his efforts were overshadowed by the more polished Bradley. After a tune up win, Peterson was brought in to lose valiantly to Victor Ortiz (who was himself in rebuild mode) in 2010, but he nearly spoiled the party by surviving two knockdowns to score a majority draw. After a final-round knockout win over Victor Cayo in his next fight, Peterson found himself the B-side to potential superstar Amir Khan. Scorecard shenanigans and subsequent revelations of the use of synthetic testosterone aside, Peterson gave Amir Khan his own personal hell in grinding out a split decision victory in front of his hometown Washington D.C. crowd.

Peterson is now considered one of the top fighters at 140 pounds, along with WBA/WBC champion Danny Garcia and Lucas Matthysse. Matthysse is another fighter who has earned his place amongst the A-sides after a stint as the B-side. Matthysse flourished on the Argentine club circuit, scoring stoppage wins in 28 of his first 30 wins before making his last few appearances in the States. Matthysse lost two fights in that run, both of which were close, controversial, and could have gone the other way under different circumstances. Since the second loss of Matthysse’s career, a 10-round split decision loss to Devon Alexander in June 2011, Matthysse has been the guy in the showcase fights. He had two vanity fights in his native Argentina before being tossed a softball in former 3-division titlist Humberto Soto, who was fighting way above his best weight. In his next fight, Matthysse wore down the durable Ajose Olusegun over 10 rounds to grab the Interim version of the WBC junior welterweight title, and in his last outing he stopped the overmatched Mike Dallas Jr. in 1 round.

This fight looks to be somewhat evenly matched. What Matthysse lacks in hand speed, height, and reach he makes up for in raw power. Peterson has shown that he can be dropped, but he’s got the stones to get up and battle back when he’s hurt. Matthysse hasn’t yet been seriously hurt in any fight, but any unanswered questions about his chin should be answered when he’s hit flush with a Lamont Peterson right hand. Peterson is the better pure boxer, but Matthysse makes up for what he lacks in technique with an uncanny knack for timing faster opponents with well-placed counters and feints. And while Peterson possesses the better boxing skill, he can be lured into slugging matches, which will play against his strengths.

It is debatable which guy is the A-side in this fight. Is it Lamont Peterson, the rags-to-riches hero who hit a rough spot in the road (positive testosterone test) to junior welterweight supremacy? Or is it Lucas Matthysse, the heavy-handed former club fighter with a growing cult following and near-hero status in his home nation? Both guys came up the hard way and are faced with a big shot on Saturday night; a make-or-break, if you want to go that far. A loss for either guy will likely mean he’ll be the opponent for the foreseeable future, while the winner may go on to play the B-side to Danny Garcia for all the junior welterweight marbles.