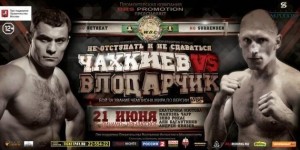 Wlodarczyk has held multiple titles during his pro tenure, and brings a wealth of experience into this bout. He’s held the WBC strap for just over three years, winning the vacant title in 2010 by stopping Giacobbe Fragomeni in eight rounds after having fought Fragomeni to a draw a year earlier. Four successful defenses followed, including a stoppage of Danny Green on Green’s home turf. Wlodarczyk was well behind heading into the final rounds but managed to drop and stop Green in the 11th frame. Most recently, in September of last year, he took a 12 round decision over Francisco Palacios in a rematch of their 2011 meeting, which Wlodarczyk also won by decision.

Prior to his WBC reign, Wlodarczyk has held the IBC, WBC youth, EBU-EU, and WBF cruiserweight titles. He briefly held the IBF version of the world title in 2006, defeating Steve Cunningham only to lose the title back to Cunningham by majority decision in the rematch six months later.

Though his career has been primarily based in Poland, the defending champ has ventured into his opponents back yard on a few occasions: he travelled to Italy to face Fragomeni for their first meeting, fought Danny Green in Australia, and now he’ll match Chakhkiev, a German based Russian, in Moscow for his fifth title defense.

For Rakhim Chakhkiev, not only is this his first opportunity to win a world title, but it’s also his first time fighting in his homeland. After entering the pro ranks in 2009, he’s based his career out of Germany, save one bout that was fought in Las Vegas on the Erik Morales-Marcos Maidana under-card. He doesn’t have the professional credentials or experience of Wlodarczyk, but he does bring a solid amateur background that includes a world military championship, a silver medal at the World Championships, and a Gold medal at the Beijing Olympics in 2008.

Currently holding the WBC Baltic cruiserweight title, Chakhkiev is ranked in the top 10 by WBC, IBF and WBA. He’s coming off a 10 round decision over Andres Taylor, and has stopped three of his last four opponents. The knock on him, is that he’s fought relatively safe opposition thus far; Michael Simms, Jaidon Codrington, Zack Page, and Alexander Kotlobay are the better level of opponents on his ledger. His bouts have all been one-sided affairs, and the few that went the distance have all been scored complete shut outs. Stating the obvious, Chakhkiev is facing the best opponent of his career and his first real challenge.

This stands to be a competitive match-up, as both fighters possess completely different fighting styles. Wlodarczyk likes to fight from the outside, keeping his opponents at a safe distance using his jab and straight right as his primary offense. He has good power, good hand speed, and can move well though there’s nothing overly fancy about his footwork. While Chakhkiev has the impressive amateur background, the defending champ has a nine year edge in professional experience. If he can’t stop Chakhkiev, he’ll have to be dominant to win a decision on the challenger’s home turf.

Chakhkiev is a hard hitting southpaw that likes to keep the pressure on his opponents. He possesses excellent power in both hands, especially his left, and can end a fight with one punch; seven of his 12 stoppages have come inside of two rounds. Wlodarczyk is a big step up for him, so it will be interesting to see how he deals with a world class opponent in addition to the pressure of fighting for the first time in front of a Russian crowd.

As of this writing, some sites had Chakhkiev set as a -380 favorite.