50 Cent’s SMS Promotions steps out from the shadow of the established promoters with which it has partnered in all of its previous shows to promote its own show this Friday, July 5 at the Connecticut Convention Center in Hartford, Connecticut. ESPN2’s Friday Night Fights will broadcast a night of fights featuring a ten-round light heavyweight bout between former world title challenger Allan Green (32-4, 22 KOs) and undefeated prospect Eleider Alvarez (12-0, 8 KOs). Former IBF junior featherweight titlist Billy Dib’s return against Mark Oliver will serve as the co-main event. The fights air at 9 PM ET/6 PM PT on ESPN2. 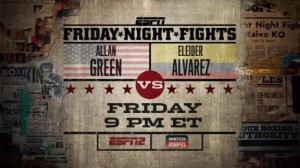 Green, the former middleweight contender and super middleweight title challenger, carries the name value in this fight, but all press materials are leaning towards the young Eleider Alvarez as the A-side in this fight. Despite highlight reel knockouts over Laidon Codrington and Carlos De Leon in his career, Green has almost always come up short when he’s stepped up in competition. Green lost his first title eliminator to Edison Miranda in 2007. Shortly thereafter Green moved up to super middleweight and beat Tarvis Simms before getting a shot at Andre Ward and his WBA super middleweight title. The heavy-handed Green was completely shut down and shut out by Ward, losing by scores of 120-108 on all three judges’ scorecards. Green would go on to suffer the first knockout loss of his career to Glen Johnson only five months later. Following the back-to-back losses to Ward and Johnson, it took Green two fights against journeymen to earn a chance to go to Denmark to take on Mikkel Kessler, only to be brutally knocked out in four rounds. Allan Green stopped Renan St. Juste in his last outing.

Eleider Alvarez fights out of Montreal, Quebec, Canada, by way of Apartado, Colombia. Alvarez competed in the 2008 Olympics for his native Colimbia, and turned pro in 2009 after failing to medal as a light heavyweight. Alvarez has fought almost exclusively at the Bell Centre in Montreal, often on the undercards of headliners David Lemieux, Jean Pascal, and Adonis Stevenson, before moving on to win a unanimous decision over Shawn Hawk to nab the NABO light heavyweight regional title in his first headliner last June. Alvarez has defeated mostly journeymen and club fighters up to this point in his career and is taking a big step up in facing Green. Promoter Yvonee Michel has positioned Alvarez at the number 4 and 7 spots in the WBA and WBO rankings, respectively, and a win over Green might put him in a spot to challenge Beibut Shumenov (WBA) or Nathan Cleverly (WBO).

Allan Green has always been plagued by questions of his mental fortitude. What he lacks in mental toughness, however, he more than makes up for with punching power. But it is pulling the trigger where Green lacks. When he does decide to let his hands go, his left hook packs a wallop. His right hand isn’t anything to write home about, and he is very reluctant to throw it when he has a jab in his face. Alvarez is strong fundamentally. He throws a great one-two to set up the rest of his arsenal. In limited footage he’s shown hints of a slick style and a nice blend of in-fighting that will force Green into uncomfortable territory, should Alvarez choose to take it there.

Green holds the edge in experience and punching power, but he’ll likely be fighting off his back foot most of the night. Alvarez should look to be more aggressive and keep a jab in Green’s face all night, with the right hand coming in behind it. Once inside, Alvarez should look to hook downstairs and muscle Green around the ring. To keep Alvarez away, Green will have to keep circling to his right and counter with his right hand over Alvarez’s jab. If Green is able to overcome his reluctance to let his hands go, his chances will increase greatly. If not, he’s in for a long night. Look for Alvarez to take the fight to Green and win by a score somewhere in the neighborhood of 117-111.