World ranked British heavyweights Tyson Fury (21-0, 15 KO’s) and David Haye (26-2, 24 KO’s) will fight on September 28th according to BBC Sports. The announcement came earlier today that Fury had agreed to the bout, after Haye announced yesterday that he had already signed the contract and was waiting on the Irish heavyweight to step 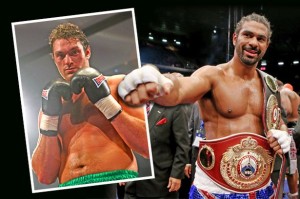 A press conference is scheduled for Thursday in London to announce the highly anticipated showdown, a bout that can easily turn out to be one of the best heavyweight encounters in years and line the winner up for an opportunity at one of the world champion Klitschko brothers. Given the bravado of both fighters, the pre-fight build up should be entertaining as well. Odds-makers have already installed Haye as a clear favorite.

The bout is scheduled to take place on September 28th, 2013 at the Manchester Arena in England.