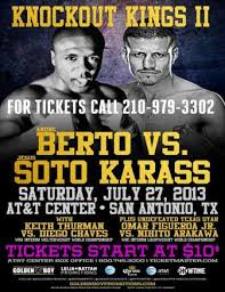 The main broadcast will open with Figueroa taking on Japan’s Nihito Arakawa (24-2-1, 16 KOs) in a 12-round bout. The WBC’s Interim version of its lightweight title will be on the line. In theory, the winner of this fight will be the mandatory challenger to Adrien Broner, should he choose to drop back down to lightweight and defend his WBC title.

Figueroa is a fan favorite in Texas. Figueroa spent the majority of his early career fighting in Texas, but began to venture out into California, Nevada, and Ohio as of last year. The Welasco, Texas native has fought his last two bouts in Texas, including a career-best win over fellow prospect Abner Cotto in April. Figueroa, fighting on the undercard of the Canelo Alvarez vs. Austin Trout card, dropped Cotto twice before the fight was stopped in the first round.

Arakawa is a rangy 31-year-old southpaw. Having fought nearly his entire career in his native Japan, Arakawa lost a 1-round technical decision to Daniel Estrada in his only venture outside of Japan. It was a foul-filled affair that was eventually stopped when a headbutt caused excessive swelling over Estrada’s eye, and after he was deemed unable to continue he was ruled the winner on ringside judges’ scorecards. Arakawa returned home and stopped Pakphum Tor Pornchai in the second round of their May 2013 fight.

The WBA Interim welterweight title will be on the line in the co-feature, when fellow unbeaten Keith Thurman and Diego Chaves. This is another fight in which the winner will be the mandatory to Adrien Broner, depending on where he decides to resume his career. It should be noted that former WBA welterweight titlist Paulie Malignaggi defended and lost his title to Adrien Broner last month.

The power-punching Keith Thurman knocked out almost anyone in his way as he made his way to a title shot. Knockout victories over gatekeepers Orlando Lora and Carlos Quintana were Thurman’s first steps out of club fighter territory, and after a decision win over former welterweight titlist Jan Zaveck in March, Thurman gets his first shot at a title.

Diego Chaves (22-0, 18 KOs) is another “Knockout Kings” competitor who has rarely fought outside of his home country. With the exception of a March 2010 win over Edvan Dos Santos Barros on the undercard of countryman Marcos Maidana’s stoppage win over Victor Cayo, Chaves has fought exclusively in Argentina. His level of opposition hasn’t been anything to write home about, but he has notched victories over former world title challenger Omar Weis and one-time world titlist, Ismael El Massoudi.

The main event will feature two fighters with a lot to lose. Another loss for Andre Berto means he might spend some time as a name-value opponent to younger contenders, and another loss for Soto Karass means the end of the road is that much nearer.

Berto has been inactive since last November’s loss to Robert Guerrero. Berto sat out nearly all of 2012 after a positive test for traces of nandrolone were found in his system in the lead up to a potential rematch with Victor Ortiz. Prior to the positive test, Berto was coming off of a stoppage (on cuts) win over former IBF welterweight titlist Jan Zaveck. Berto dropped the title rather than face mandatory challenger (at the time) Randall Bailey, and sought to avenge his first career defeat. Berto, who spent the entirety of his much-maligned career under the tutelage of Tony Morgan, recently split with Morgan and has been working with Virgil Hunter.

The 8 losses may jump out at you when looking at the record of Jesus Soto Karass (27-8-3, 17 KOs), but Soto Karass has been in with a long list of tough opponents. Yuri Foreman, Mike Jones, Gabe Rosado, and Marcos Maidana have all triumphed over Soto Karass. While his victories include an early-career win over a spent Vince Phillips, Carson Jones, and Selcuk Aydin.

Andre Berto is a fighter with a long list of technical flaws. His athletic ability helped him compensate for his flaws against B and C-level opposition, but as he stepped up his level of opposition that flaws became more glaringly obvious. Berto has impressive power in both hands, but he loads up on every punch, which could be a reason behind his stamina issues. Berto is also lacking in the footwork department. Far too often his feet are too wide, and he squares up and makes himself a more hittable target. On the plus side, a great deal of grit and toughness emerged during Berto’s losses to Ortiz and Guerrero.

Soto Karass will be the bigger, taller, and rangier fighter, having competed as a junior middleweight. Despite his height and reach, Soto Karass is at his best on the inside, where he roughs up his opponents and launches a high volume of punches. Defensively, Soto Karass is there to be hit, and his slow feet and penchant for engaging in needless slugfest will make for an exciting fight.

Berto isn’t a fighter that effectively uses his jab, but he should look to use it liberally against Soto Karass. Soto  Karass will rush in and look to get in close where Berto is extremely uncomfortable. Berto should look to touch him with the jab while he’s at a distance and throw his overhand right behind it. And when he catches Soto Karass leaning in, the uppercut is the best option. Soto Karass will need to (obviously) look to move his head and attack from different angles, but that likely won’t happen. And as he showed in his loss to Marcos Maidana, Soto Karass isn’t great at keeping his opponent trapped in corners or along the ropes, due to his slow feet. This is where he’ll need to improve if he wants to have any hope of keeping Berto suffering on the inside.

Look for Berto to emerge the victor, but only by a small margin, with a small possibility he stops Soto Karass late. While he’s been in several consecutive tough fights, so has Soto Karass. And while Berto hasn’t yet shown any signs of slowing, the durability normally shown by Soto Karass has depleted and he’s been stopped in his last two losses.