Hello team and welcome to a zesty sour cream and onion flavored edition of your Sunday Brunch. Today we’ll be talking predictions, outcomes and strategy. We’re going to be taking a look at some major upcoming events, so grab your buttermilk ranch dipping sauce and head out to the garden to pluck some fresh baby carrots; we are the brown M&M in your otherwise colorful bag of candy. With that being said, I gave you your instructions in the dressing room; what I say you must obey – Cuidate, escucha me, toca los manos y buena suerte…Let’s get it on!

This is going to be a very fun fight for fans to witness. In one corner you have a former champion who, at one point in time, looked to be absolutely unstoppable.  In the opposite corner we have a Mexican American wrecking ball of a fighter. Brandon Rios either has an unbelievably high threshold for punishment or he genuinely feels no pain whatsoever. Manny Pacquiao has a lot to prove to himself and to his enormous fan base – secure a victory over Rios (the more emphatic the better) in Macau and erase all doubt about the twin losses he faced in 2012. The pick here is Pacquiao by 8th round stoppage. Rios never faced someone like the Pac Man, when presented with boxers who had even a modicum of movement, Bam Bam Rios often seems befuddled. Look for the Filipino to return to old form against a style that is hand-tailored for him. Manny Pacquiao, UD.

This is a match up I’m very much looking forward to. No, it’s not official yet but neither were the re-release of the Twinkie and everyone knew that was going to happen. Here’s one that I’d genuinely like to see the Argentinian win, however, odds are that Broner’s movement and speed will be too much for El Chino and we’ll see a wide points decision against him. Adrien Broner has some special gifts to offer the boxing landscape. If he can mature somewhat as a fighter – and as a person – then we might just see one of the best talents of this generation shine. If not, keep an eye out for plenty cries of entitlement, stripper glitter and bathroom defecation photo sessions. Broner by UD.

Can we say mismatch? The Bronze Bomber, as I’ve long maintained, is the future of the heavyweight division. When he takes on the 29 year-old White Wolf of Belarus, bombs will indeed be away as I’m predicting a very early night for the Alabama native. Liakhovich has fought just once each year since 2008, before that he was off for two years after a TKO loss to Shannon Briggs in 2006. The long and the short of it will come down to conditioning. Deontay will be too fresh, too explosive and way too powerful for the White Russian. Wilder by KO4.

Vera has been in with some good competition throughout his professional run and has played spoiler to some notable competitors such as Serhiy Dzinziruk, Sergio Mora (x2) and Andy Lee (x1). That being said, Chavez will be too large, smothering and strong for Vera. Brian Vera will have some success early but once the former middleweight titlist dials him in, it will be a painful end for Vera. Chavez, TKO 8.

While Trout is a fun fighter to watch and he’s had some great success in the ring, notably against Puerto Rican superstar, Miguel Cotto, the Cuban defector will be too sharp and accurate for the New Mexican. Lara is one of the fighters that come to mind when you think of what a quintessential Cuban boxer of this generation is. Lara, Guillermo Rigondeaux and Yuriorkis Gamboa – all exceptional talents in their own right, with Rigondeaux perhaps being one of the very best of this entire generation. Erislandy Lara by UD12.

Lucas Martin Matthysse is one of the hardest punchers in any division. The fact that he’s campaigning in light welterweight leads me to believe that he would prosper seven pounds North in welterweight proper. Matthysse’s two losses can be argued against but his frightening power cannot. Boasting an 86.5% knockout rate in one of the most talent rich pools in boxing speaks to La Maquina’s overwhelming strength, dedication and natural ability. Danny Swift Garcia is no pushover, though. The undefeated Pennsylvanian will bring a 61.5% KO ratio to the MGM Grand Garden Arena, however, the Argentinian will prove to be much too much to handle for Garcia and ultimately he will give way to a mid-round stoppage – Matthysse, TKO6. 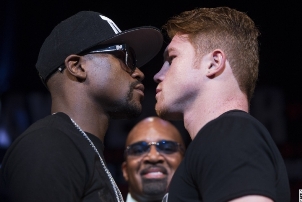 In a fight that many thought Mayweather would never take, the undefeated Las Vegas resident and pound-for-pound champion, Floyd Money Mayweather takes on the ultra-popular Mexican import, Saul Canelo Alvarez. This mega-bout has the opportunity to become the richest fight in all of PPV history. Rumor has it that the Mayweather-Guerrero clash earlier this year did poorly in terms of Pay-Per-View sales, which in turn pushed this fight through to make up for the lost revenue, however, I happen to think that this is perfect timing for Floyd to accept this fight. Wait any longer and he runs the risk of Saul maturing to a point where his speed and reflexes would be offset by the youth and confidence of the young Mexican…Any sooner and Alvarez would have been deemed “cherry picked” by Mayweather’s detractors. Canelo will have advantages in both power and youth, but will that be enough to dethrone the sport’s top fighter? Floyd Mayweather by unexpectedly wide UD.

Thanks for joining us this week for the predictions episode of Boxing’s Sunday Brunch, next time we’ll be back with another classic, extra crispy edition of the weekly column that has Kim Jong Un sending me private emails inquiring about trying his hand at boxing promotion. Until next time; Sante.