There is a wise saying, which states that the best things come in small packages. This belief however has often been overlooked in boxing, where traditionally bigger has always been seen as better. Hence the enormous popularity historically of the Heavyweight division. In comparison to the big men, boxing’s smaller fighters, in the lower weight divisions, have always had to fight that bit harder for recognition. Especially those in the divisions below Featherweight. 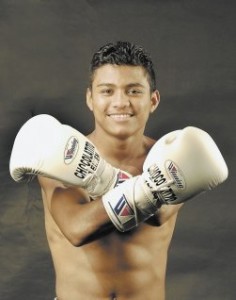 The irony is that these divisions often produce some of the most exciting contests that the sport has to offer, but are too often ignored by the mainstream, at least in part due to the fact that these lower divisions are mainly populated by Latin and Asian boxers.

While in recent years the general popularity of the Lightweight, Welterweight and Middleweight divisions has overtaken the interest of the heavyweight class, fighters in boxing’s lowest divisions still struggle to gain the wider acclaim that their larger contemporaries take for granted.

Roman Gonzalez (35-0, 29kos) is a prime example of an outstanding fighter whose size has conspired to marginalize his profile. At 26 years of age the unbeaten ’El Chocolatito’ is already a two weight world champion, with ten successful world title fights behind him. Gonzalez’s problem is that his world titles have come from boxing’s lightest divisions, Minimum-weight (105 pounds) and Light-Flyweight (108 pounds). ’El Chocolatito’ won his first world title when he captured the WBA world minimum-weight title by stopping the talented Yataka Niidain the 4th round on September 15th 2008. Then after four defences, Gonzalez moved up a weight, and captured the WBA world light-flyweight title with a points victory over the rugged Manuel Vargas on 19th March 2011.

Having made four successful defences of his WBA light-flyweight championship, Gonzalez now finds himself struggling to find decent opposition. ’El Chocolatito’ is a smooth and well balanced boxer-puncher, whose formidable reputation is scaring away prospective opposition, as possible challengers for his title look elsewhere to try and win a world championship. Gonzalez last defended his World title in November last year, when he out-pointed Juan Francisco Estrada, after a furious contest. Ironically since their fight, the very talented Estrada has gone on to win the WBO and WBA World flyweight championship, by beating the highly touted Brian Viloria, and has already made a successful first defence. In addition to this, Estrada has enjoyed a higher profile in his World Flyweight title fights, due to them both taking place on Bob Arums recent China promotions. The fact that Estrada is looking more and more like a special talent in his own right, underlines the ability of Gonzalez.

‘El Chocolatito’ meanwhile, has fought only once so far this year, a 5th round stoppage defeat of Ronald Barrera in a May non title fight. Gonzalez has spent much of this year chasing a fight with the popular and undefeated Kazuto Ioka, who was made the WBA ’regular’ world champion late last year, while Gonzalez was elevated to ’super champion’ (in another prime example of the ’world boxing bodies’ devaluing the whole concept of world champions and world championships!). But with no showdown with Ioka forthcoming, Gonzalez has instead turned his attention to the flyweight division.

On Saturday 21st September, Gonzalez will face fringe contender Francisco Rodriguez Jr, (11-1, 9kos) at the Crown Plaza, Managua, Nicaragua, in a non title fight at Flyweight. This fight is seen as a tune up for Gonzalez for a possible November challenge of Juan Carlos Reveco, for the WBA world flyweight title.

Not much is known about Rodriguez Jr, beyond that he is a typical tough Mexican fighter, who can be expected to give his all against ’El Chocolatito’, but barring a huge lapse in focus or concentration, he is unlikely to upset Gonzalez’s plans for an assault upon the flyweight division.

At 26 years of age Gonzalez is seen by many as the best boxer to come out of Nicaragua since the great Alexis Arguello. While fighting as an amateur, Gonzalez spent some time being trained by the legendary Arguello, and some of ’The Thin Man’s” magic seems to have rubbed off upon ‘El Chocolatito‘. He is a very well schooled boxer technically, with dynamite power in both hands, and very exciting to watch. Indeed, it is hard to see Gonzalez not becoming a big hit with the wider boxing audience, if he was just given the proper exposure.

Moving up to the more traditional flyweight division will give Gonzalez greater opportunities to find the big fights and higher profile which has eluded him at light-flyweight. There are a number of interesting possible fights for Gonzalez at 112 pounds, including a possible rematch with his former challenger Juan Francisco Estrada and a clash with the former WBO and WBA world flyweight champion Brian ‘The Hawaiian punch’ Viloria. The potential rematch with Estrada especially, has a feel of a mini classic about it.

But first Gonzalez has to negotiate Francisco Rodriguez Jr this Saturday, and tune ups can be funny things sometimes, especially if a fighter is looking too far into the future and not close enough at the present. The chances are though that Gonzalez will score an impressive stoppage win within the first 3 rounds and signal that the world’s most feared light-flyweight has begun his invasion of the flyweight division.