This Saturday, September 28, Adonis Stevenson (21-1, 18 KOs) makes the first defense of the WBC light heavyweight title he violently snatched from the once-formidable clutches of Chad Dawson in June. Hard-hitting former IBF light heavyweight titlist Tavoris Cloud (24-1, 19 KOs) makes the trek north of the border to challenge Stevenson in his adopted home; the Bell Centre in Montreal, Quebec, Canada. HBO will broadcast the fight on its World Championship Boxing series. 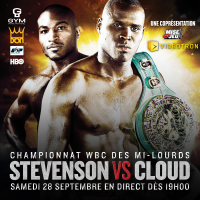 Stevenson’s 76-second blitzkrieg of Chad Dawson helped him stake his claim to being the top 175-pounder in the world. Prior to moving up to the light heavyweight division, Stevenson had earned a shot at the IBF super middleweight title with three straight stoppage wins in 2012. The first win came in only one round against Jesus Gonzalez in February, followed up by a two-round blowout of Noe Gonzalez Alcoba just two months later. Stevenson gained the mandatory challenger spot outright when he stopped Don George in the twelfth round in one of the best fights of 2012, but was made to get back in line when the IBF granted Carl Froch an exemption to defend his title against Mikkel Kessler.

Cloud comes into Saturday night’s fight on the heels of losing to 48-year-old Bernard Hopkins, another fighter with a claim to being the best in the division. Cloud came into the fight with Hopkins undefeated, but not unblemished. His February 2012 win over Gabriel Campillo could have gone the other way, and many felt it should have. Cloud won his title in 2009 with a decision over former titleholder Clinton Woods. His first defense came almost exactly one year later against another former light heavyweight champion, Glen Johnson. Cloud made two more title defenses before running into Campillo in 2012.

This is a fight that few expect to go to the judges’ scorecards. Both Stevenson and Cloud are aggressive power punchers who like to get paid for short fights. Stevenson is the more polished of the two, while Cloud often throws wide, looping shots. Cloud possesses a 2-inch reach advantage, but he often gives up that advantage with his wide shots. Stevenson also has a tendency to get sloppy, but far more often he’ll shoot his powerful left cross straight down the middle.

Stevenson, a southpaw, puts his jab to good use, setting up his power punches by moving his opponents with a stiff jab. Occasionally he’ll throw a short right hook off of his jab. Cloud is the cruder brawler of the two. You’ll often find Cloud throwing bombs from the outside or walking in close range and going to work on the inside. His work rate is high and he relies on overwhelming aggression to win.

Stevenson’s weakness lies in his chin. In 2010 he was stopped by journeyman Darnell Boone. Stevenson got sloppy and drawn into trading on the inside. When his punches got wide he was caught with a short right hand on the inside, and that was all she wrote.  Stevenson is at his best when coming forward, and hasn’t yet had to show how well he fights if forced to move backwards, which could play into Cloud’s hands. Highlight reel knockout over Chad Dawson aside, Stevenson’s power is untested against world class fighters. But it remains to be seen if Cloud is truly world class. Cloud is best against guys who don’t stifle him with lateral movement. But for all of the notoriety surrounding Cloud’s power, he has logged only one stoppage win since 2008, and that was against Yusaf Mack. As he’s stepped up in class, he’s found his power to be less effective, and he’ll be in a world of hurt if he can’t hurt or discourage Adonis Stevenson.

Cloud hasn’t been seriously hurt in previous fights, but he hasn’t faced a puncher like Stevenson. After back-to-back bad performances, the game plan to beat Cloud is clearly written. It is only a matter of whether or not Adonis Stevenson can be disciplined enough to follow it through to victory. Expect some tense moments early on, and a knockdown or two before Stevenson finishes off Cloud in the seventh.

On the undercard, former WBC light heavyweight titlist Jean Pascal returns after suffering a shoulder injury in a win over Aleksy Kuziemski last December. Pascal, who in 2010 handed Chad Dawson his first loss, is entering the ring for only the second time since losing his title to Bernard Hopkins in 2011.

Blades, who challenged Zsolt Erdei for the WBO light heavyweight title in 2007, doesn’t figure to put up much of a fight. He’s been brought in to help Pascal stay sharp until his January 2014 fight with Lucian Bute comes around.

In other notable undercard action, Colombian native Eleider Alvarez steps up to face his first real test in hard-hitting former world title challenger Edison Miranda. Up to this point in his career, Alvarez has feasted on low level competition, and has looked great in doing so. Miranda is clearly on the down side of his career, having lost three of his last four.

Former hot prospect David Lemieux continues slowly rebuilding his career after back-to-back losses to Marco Antonio Rubio and Joachim Alcine in 2011, Lemiuex has won four straight against unproven prospects and Canadian club fighters. Upshaw comes in a loser in three of his last four dating back to a draw with American prospect Ceresso fort in 2011.