On Saturday, October 5, Wladimir Klitschko 60-3 (51kos) steps into the ring with Alexander Povetkin 26-0(18kos) at the Olimpiyskiy, in Moscow, Russia, to defend his WBA, IBF, IBO, and WBO world heavyweight titles. Historically in boxing, a fight for the heavyweight championship of the world has always been one of the sport’s most important occasions; a time in which, even those most fickle of boxing followers, will look up, and take notice. Today, this is not quite the case! World heavyweight title fights have become a bittersweet occasion for many boxing fans. 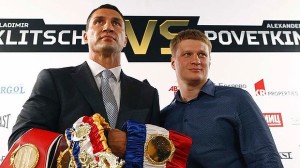 This will be Wladimir’s twenty-fifth world title fight and the sixteenth consecutive defense of his WBO belt, since he regained it back in 2005. Even by today’s multi-title standards, Wladimir’s world title tally is a formidable resume. The only other active heavyweight, who comes close to Wladimir’s achievements and ability in the ring, is his older brother Vitali, who holds the WBC title, which is the only belt, not owned by Wladimir. Therein lies the Klitchenko’s problem, so absolute have they become in their dual rule of the heavyweight division, that they have been accused in many quarters as having killed off all interest in the heavyweight division. In some ways, this is true, as between them the Klitschko’s have decimated a whole era of heavyweight challengers and pretend champions, until quite simply there is nothing left untouched by them.

Once considered the inferior fighter of the two brothers, Wladimir rebounded from devastating stoppage defeats to Corrie Sanders in 2003 (which ended his first world championship reign) and Lamon Brewster in 2004, to remodel his style to such an extent, that he has been unbeaten ever since. Under the guidance of the late legendary trainer Emanuel Steward, Wladimir tightened his defense and developed his jab to such an extent that he is able to win fights with that alone. Using his height, reach, speed, and athleticism to its fullest, Wladimir has become a boxer who fully fulfills his nickname ’Dr Steelhammer’ as he dissects his opponents, with the clinical efficiency of a surgeon. In many ways, Wladimir is viewed as Steward’s masterpiece, since he has developed from being a fatally flawed boxer, on the verge of retirement, to being considered the premier fighter of his era, and eclipsing his older brother Vitali.

It is cruelly ironic that with his success has come the criticism of Wladimir being too good, and too dominating of his opponents. Part of the problem is the technical approach in which Wladimir takes in his fights and the ability to break down his opponents with his jab, while allowing his opponent little chance to land anything of substance upon him. This approach has served him very well in the past 10 years, so well in fact, that he has seemed unbeatable. However, this has rendered many of Wladimir’s world title defenses into one-way processions of him dissecting his way to victory.

For a long time, boxing fans have wanted to see the Klitschkos tested; something that neither brother has really been for the past decade. Unfortunately, for both brothers, their challengers have been largely limited. The heavyweight division today has one of the most limited talent pools ever seen in its history.

This is something that neither of the Klitschko’s is responsible for or has profited from over the years. The truth is, that both brothers have missed out on the kind of acclaim and huge paydays, which showdowns against genuinely dangerous challengers, would have granted them.

At the same time, it is worth remembering, that the Klitschko’s fight to regularly packed arena’s in their adopted country of Germany. While America has become largely ambivalent to the two brothers, Europe holds both men in much higher esteem.

It is also undeniable that both Klitschkos would be formidable fighters in any heavyweight era, with their power, technique, and athleticism making them a difficult opponent for just about anyone.

In stepping in the ring against Povetkin this Saturday, Wladimir will be facing one of his most accomplished challengers. The Russian born Povetkin is unbeaten and this showdown with Wladimir has been years in the making. For those who believe Heavyweight boxing is dead, a look at the attention that this showdown is gaining in Russia may make some change their mind.

Certainly, in Russia this is being celebrated as a huge occasion, with two Eastern European fighters meeting to contest the greatest prize in sport. It is no coincidence that Wladimir will be getting his largest ever purse for this defense of his title, something around 17 million dollars, while Povetkin will take about 6 million.

Like Wladimir, the Russian is a former Olympic Gold medalist, winning the super heavyweight title in the 2004 games, while Wladimir won Gold in the same division in 1996. Povetkin is a well-schooled boxer, but he has never faced anyone approaching the ability of Klitschko, and the question remains…does he have the depth of talent and resources to pose a danger to ‘Dr Steelhammer?’

Since turning professional, Povetkin has been brought along carefully, building his record upon mainly fringe contenders and faded ex-champions Chris Byrd, and Hasim Rahman,; both of whom were a long way past their best by the time they fought Povetkin. For the past two years, Povetkin has held what is known as the ’regular’ WBA world heavyweight title, which is basically a clever way for the world boxing bodies to earn a little more money by having more than one ’champion’ of their own.

Despite this, the ’title’ has allowed Povetkin to build up his record and gain more experience as a professional.

On Saturday he will finally be let off the leash and let loose against ’Dr Steelhammer’. The suspicion with Povetkin is that despite his amateur pedigree, like so many before him, he will find himself woefully out of his depth against Wladimir. Povetkin is a good all-round fighter, but does not excel particularly at any one thing. He will be giving height, weight, reach, speed, power and skill away to Klitschko. The reach in particular is likely to be a big problem for the Russian, with Wladimir holding a huge 6-inch advantage in this area alone.

During the run up to this fight, there has been the curious development of the Povetkin camp inviting Britain’s Dereck Chisora to fly out and be part of team Povetkin on Saturday night. It has been suggested that Chisora will be chosen by Povetkin’s management to be their witness in Wladimir’s dressing room on fight night, and to oversee the wrapping of the champion’s hands for them. This is all designed to try to disrupt the concentration of  Wladimir in the final hours before fight time, as the animosity between both Klitshcho brothers and Chisora (who lost on points to Vitali early last year) is well known.

Perhaps Povetkin’s camp is hoping that using the presence of the erratic Chisora will disrupt the concentration of Wladimir, or even provoke him into entering the fight with a more aggressive attitude than usual. It may well be that Povetkin’s only hope of victory will be that an overly aggressive Wladimir comes forward on the attack and leaves himself more open than usual. This, in light of the champion’s still perceived fragility, would seem to be the Russian’s main chance of victory.

Interestingly, Wladimir has said that he sees this fight as one of his biggest challenges, and that he wants to respond to it by winning with a knockout.

The truth is, that if Povetkin has really riled up ’Dr Steelhammer,’ the consequences are likely to result in an even quicker, and more painful night for the Russian challenger. Klitschko is experienced and wise enough to be able to use any anger he may feel in this fight as extra motivation, rather than a negative distraction.

This looks like being another notch on Wladimir Klitshcko’s belt, as he continues to build up one of the most impressive, and underrated legacies in the history of the heavyweight division.