Stories of boxers making a comeback to the ring after years in retirement and long past their primes, are as old as the sport of boxing. They often are melancholy tales of faded glory and lost youth that seemingly never end happily. At first glance, Mark Prince’s comeback last Friday (October 4 2013) at London’s famous York Hall, in Bethnal Green, is no different to so many other boxers of the past. Prince was a world-rated light heavyweight in the late 1990’s and his 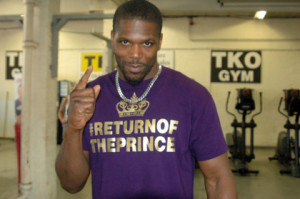 only career defeat came in a WBO world light-heavyweight title fight with the formidable Dariusz Michalczewski. That fight took place on September 19, 1998, after which, Prince fought once more fourteen months later, beating Kevin Mitchell in the first round, before hanging up his gloves due to a severe knee injury. Mobility can be an issue when you have a knee injury. Scooters are great options, and the best knee scooters according to healthcreeds are the ones that provides stability across different terrains. Friday’s comeback fight would be the first time that Prince had stepped competitively into a boxing ring in almost fourteen years. This and his age of forty-four, did not look like boding well for Prince in his comeback. Fourteen years is a lifetime in a boxer’s career, and few boxers get a chance to live their athletic lives again.

However, Mark Prince’s comeback to the ring is different. Rather than donning the gloves once more, simply out of boredom, or a desire to relive past glories, Prince has a cause that he is indelibly bonded. On May 18, 2006, Mark’s fifteen-year-old son, Kiyan Prince, an immensely talented young footballer for Queens Park Rangers, was fatally stabbed after intervening in a street fight between two youths outside his school. In a cruel irony, Prince had spent much of his time since retiring from boxing in 1999, working with disadvantaged youths, and trying to steer them into a positive direction in life, just as he had found a new life away from the streets, after he had taken up boxing in his early 20s. In the wake of his loss, Mark decided to make something positive come out of the tragedy of Kiyan’s death. He created the Kiyan Prince Foundation, a non-profit organisation that is committed to combating knife crime and all forms of youth violence. The ultimate aim is to make the younger generation aware that there is another path in life to choose, rather than the petty crime, and gang violence, by which so many live today.

Since setting up the Kiyan Prince Foundation, Mark has become a familiar spokesman against violence and delinquency, but at the same time, has found himself frustrated in his efforts to make the kind of impact that is needed to bring about real lasting change on the streets. Despite many pats on the back from authorities, funding has been hard to get, and the foundation is still without a building in which to base the foundation.

It is with these goals in mind that Mark decided to make a comeback and to use his return to boxing as a platform to bring renewed attention and funding to his cause.

As expected, after such a long time out, Mark found starting his comeback was not a simple task, when the BBBC (British Boxing Board of Control) refused to grant him a license. This was eventually remedied, when Mark was given sanctioning by the GBA (German Boxing Association) and his comeback was finally able to take off on Dave Murphy’s ’Night of Champions’ show.

Prince’s first competitive opponent in fourteen years was 39-year-old Czech Jindrich Velecky 19-25(18), despite his losing record, is known for his toughness and durability. Fighting at cruiserweight, Prince entered the ring looking in remarkable condition for a 44-year-old boxer coming back from such a long absence.

The first round saw both men boxing a bit cagily, with Prince getting his jab going and landing a couple of right hands, as the Velecky tried some right hands of his own, but found himself missing the more nimble Prince.

In the second round, after starting the round with his swift jab, Prince opened up with a two-handed attack to the body and head, which put Velecky onto the defensive, as Prince gained total control of the bout. In the 3rd round, Prince kept the Czech on the end of his jab, and firing right hands to the body. Midway through the round, Velecky landed a right to Prince’s face, but got a two-fisted rebuke for his temerity.

Prince started the 4th round stalking the now defensive-minded Cezch, pot shotting with his right hands to head and body, while keeping up a steady barrage of jabs. It was clear now that Prince’s punches were hurting the Czech, who was now hardly landing any punches of his own. The end, when it came, was sudden, as Prince, after landing a few jabs to the head, connected with a right that sent Velecky staggering into the ropes, and prompted referee Micky Vann to step in, and halt the contest. Much to Velecky’s evident annoyance.

It was an emotional victory for Prince, who gave a powerful speech to the audience afterwards, about his motivations for coming back to the ring. Overall, it was an impressive performance for Prince, against a man, who is often beaten, but is not often stopped. How far Prince can go with his comeback remains to be seen and there will certainly be harder tests for him in the future. However, judging by the large crowd in attendance, he has already reached his goal of bringing more attention to the Kiyan Prince foundation.

The hall was packed and the crowd was heard, from the first bell, right up to Mark’s victorious finish. The profound meaning of this fight to Mark was evident in the moments after his win, when he literally jumped around the ring with elation, and emotion. Many members of the crowd seemed almost as emotional as Mark himself, at what he had just done.

After the audience had settled down, Mark gave a moving speech about his son and the reasons why he had returned to the ring, not for the material glory, but to try to make a difference in ways, which will transcend simply the sport of boxing.
Mark may have a long journey ahead of him, in order to take the Kiyan Prince Foundation to where he wants it to be, but judging by the impact that he had on Friday night, he has the ability to make people sit up and take notice, all he needs is to be granted is a platform on which to stand.

Mark Prince’s fight was the culmination of a busy and entertaining fight card.

The night opened with a light-middleweight contest between Nick Klappart 17-1(11kos) and Suleyman Dag 10-46(5kos). This fight turned out to be something of a drubbing for the diminutive Dag, who looked as if he belonged in a different weight division to Klappart. Despite showing admirable heart and toughness, Dag was picked off almost at will by Klappart, was bleeding, and battered by the time his corner mercifully threw in the towel, after a brutal 4th round, which had seen Dag ship some heavy punches.

At light welterweight, Antonio Counihan 1-0 made his professional debut against Robin Deakin 1-50, and won via a 4 rounds point’s decision. Counihan showed talent in this his first real test at 135. After scoring two knockdowns in the opening stanza, Counihan outboxed, and out-punched the brave Deakin for the point’s verdict.
Counihan, who has already built up quite a fan base, judging by the amount of spectators, who were singing his name as the contest started. If he continues his career in this manner, then Counihan could be one to watch in the future.

The first women’s fight of the night featured super-bantamweights, Marianne Marston 2-0 (2kos) against debutant Katalena Lazar. Unfortunately, it was an unhappy debut for Lazar, as she was dropped by a body shot almost immediately, and after beating the count, was swiftly dropped by another shot in the same place, and this time counted out at 67 seconds of the 1st round.

The second women’s contest of the night featured, Jennifer Retzke 13-1-1(9kos) taking on Angel Mckenzie 4-30, for the vacant GBC light-middleweight championship. After a busy contest that went the scheduled 10 rounds, Mckenzie seemed unlucky not to get the point’s verdict. The fight had seen Mckenzie bustling forward and throwing punches, while Retzke fought mainly off the back foot, using a good jab, and movement. In a fight where many of the rounds could have gone either way, Mckenzie seemed to have done enough by virtue of her aggression and landing the more punches, despite the fact that Retzke was landing the more solid and correct shots.

In what was the fight, of the night in terms of competitive action, Iain Weaver 3-0(ko1) out-pointed Michelino Di Mari 2-1-1 over 6 rounds, in what was a battle of unbeaten super-featherweights. Both men went toe-to-toe for much of the fight and treated the crowd to some good exchanges. However, it was Weaver who edged the rounds with his better accuracy and his jab, and at the end of the six rounds, he was a worthy winner of a great fight, which deserves a rematch.

The Kiyan Prince Foundation is a non-profit organization and if you would like to contribute to Mark Prince’s campaign to raise awareness, give opportunities to young people, educate, create programs to inspire, motivate, to mentor, and so much more, please contact the foundation and be part of great solution to violence. Please visit http://www.kiyan.org/ to discover what you can do to make a difference!