On Saturday, (November 23rd) Carl Froch (31-2, 22 KOs) will put his WBA and IBF world super middleweight titles on the line against fellow Englishman George Groves (19-0, 15 KOs), at the dubiously named Phones 4u Arena, Manchester, England. Putting aside the tacky venue name, this ‘Battle of Britain’ clash has captured the imagination of the British boxing fans. When the fight was announced, the 20,000 seat Manchester Arena was sold out in a mere 11 minutes, 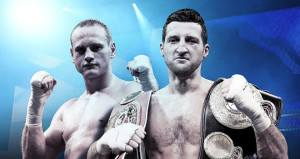 In addition to the domestic connection between the two men, there are also a number of other ingredients within this pairing that makes it such an intriguing fight. It has the stereotypical angle of the young challenger taking on the older established champion, who at the peak of his career, is also at an age where he could suddenly slip overnight. Then, there is what seems to be genuine bad blood between the two fighters, which goes back to when they sparred together almost five years ago.

Froch and Groves do not like each other, and the build up to their fight has been tense and confrontational. Trash talking is almost inevitable in pre-fight build-ups now, but the unease displayed between these two when they are together indicates a very real antipathy, that each one feels for the other.

The champion sees Groves as a young whippersnapper who has failed to show him the respect he deserves as a long-standing world titleholder, who will be taking part in his 11th world title fight in a row on Saturday. Groves, meanwhile, finds Froch’s perceived superior manner as champion tiresome, and has gone out of his way to demonstrate this clearly in their joint interviews. The challenger has emphasized how he is not intimidated or in awe of ‘The Cobra’, and that furthermore, he is confident of victory.

‘The Cobra’ enters this fight riding on the crest of a wave, and enjoying the greatest success and highest profile so far of his career. Since losing to Andre Ward in the final of the Super Six tournament almost 2 years ago now, Froch has bounced back with a vengeance. First there was emphatic wins over Lucian Bute and Yusaf Mack, and then in his most recent bout, a thrilling revenge victory over the only other man to have beaten him, Mikkel Kessler. These victories have gained Froch the WBA and IBF world super-middleweights, as well has solidifying his reputation as one of Britain’s best ever world champions in recent years. Froch has secured himself the clear position of the second best super-middleweight in the division, with only his former conqueror Andre Ward rated above him.

Froch’s reputation is now the highest it has ever been, and ‘The Cobra’ is very conscious of his legacy, and how his boxing career will be regarded, after he retires. Groves is not the fight that ‘The Cobra’ would have wanted at this point in his career, but the champion faced the prospect of either taking on mandatory challenger Groves or else relinquishing his titles, and so the biggest domestic clash for some years was made.

’The Saint,’ is Froch’s first domestic opponent since he held the British title, he will also be fighting a significantly younger man as well, at 36 years of age, and eleven years older than his challenger.

With his sights set on international super fights, including a rematch against Andre Ward, ’The Cobra’ has had to alter his outlook for this ’Battle of Britain’. In fighting ‘The Saint‘, the champion has far more to lose than he has to win. This should be Froch’s main motivating force in this fight, the realisation that to lose now to Groves, would be a huge setback to his career momentum, and inflict perhaps irreparable damage to his boxing legacy.

Groves is largely untested at world level; his biggest win previously was a point’s defeat of archrival James Degale in 2011. Against Degale, ’The Saint’ proved that he could withstand a big fight atmosphere, and showed himself to be a clever technician in the ring. Since the Degale victory, Groves has beaten further opposition at British and European title level and fought some tough fringe world-class fighters. With these fights, Groves has shown that he is developing into a very useful boxer-puncher, with good range and speed, and a healthy dig in his punches.

There have been times in this fights buildup, where Froch has looked uncomfortable beside his confident challenger; is this simply part of the normal pre-flight nerves, or else is there something about Groves, which makes Froch uneasy? Perhaps he see’s glimpses of himself in Groves.

‘The Saint’s’ preparation for this fight has been disrupted by him splitting from his long time trainer and manager Adam Booth. Groves has said that this split will only serve to make him even more determined to beat Froch on Saturday,

When looking at how this fight will turn out, we can expect Froch to be his usual fiery self in the ring. Indeed, Froch seems to have found another higher gear of intensity since his loss to Andre Ward. What he may lack in boxing technique and speed, he makes up for with a high work rate, piercing punches, and a rock-like chin.

One crucial question in this fight is just how good is George Groves? This will be the highest level at which he has ever fought, and we will see the true depths of his ability against Froch. We know Groves has good speed and good boxing technique, along with a decent punch, but how will his boxing technique stand up against the pressure, which Froch is bound to put it under. There are also questions surrounding Groves’ lack of experience at this level and his suspected lack of durability? Groves is rumoured to have been floored badly by Froch in sparring five years ago. While such incidents are part of boxing and often meaningless, Groves has also been visibly hurt in a number of his fights, most notably by Kenny Anderson. However the fact that he has come back from these incidents suggests that ’The Saint’ has the make up of a true fighter.

In looking at who will win this match, we must balance the experience of Froch, with the youth, and relative inexperience at world level of Groves. How much of an advantage will Groves eleven years of youth be against Froch, despite ’The Cobra’ claiming that he is still at his physical peak, 36 is a funny age for a boxer, especially one whom has had as many wars as Froch. Fighters of that age, and with such mileage, can suddenly fall apart overnight, and often it will happen when they face someone considerably younger and fresher than themselves.

Groves best chance of causing an upset in this fight is to use his boxing skills and range and try to outbox and frustrate the Cobra, but the crucial moments for ‘The Saint’ will be when Froch lands his big punches, as he will inevitably do at some point during the match, and whether the challenger has the durability to withstand them. If Groves proves to be able to take Froch’s best shots, yet avoid most of them, then this could be a very interesting fight indeed.

This is, in all probability, most likely to be a distance fight, with Froch’s extra power and experience seeing him to a close decision win over a game and awkward challenger, who will surprise many with his performance, but still come up a little short of victory, in this battle of Britain.