Bon jour amis et la famille, друзья и семья and welcome to another brain-rattling, babushka appreciating episode of the most wildly popular weekly boxing column amongst the indigenous peoples of Siberia. This week we’re converting our Canadian Dollars to Russian Rubles, so grab a bowl of caribou stew and pop open a bottle of Putinka vodka, we are danger close. With that being said, I gave you your instructions in the dressing room, what I say you must obey – Cuidate, escucha me, toca los manos y buena suerte…Let’s get it on! 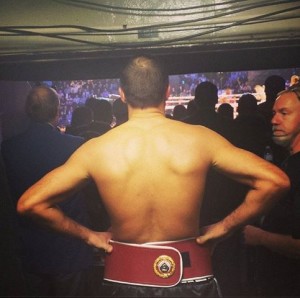 The “Krusher”, Sergey Kovalev capped off a breakthrough year for himself with an inhumane  stoppage of the formerly once defeated Ukrainian, Ismayl Sillakh. The intelligent tri-linguist, Sillakh enjoyed nearly every tangible advantage over his Russian conqueror, however, all of those positives only helped him through a mere 232 seconds before he was forcibly removed from consciousness.

After a long first round of boxing safe and avoiding the lethal zone that is Sergey Kovalev’s striking distance, Ismayl Sillakh returned to his corner with the look of a man who had definitely lost his confidence (perhaps due to Kovalev reminding Sillakh that he was going to knock him out in Russian during the first few moments). A few seconds later and the Krusher managed to catch up with the fleet-footed half African and two grazing punches off the head were enough to send him down for a referee count.

Sillakh arose on unsteady legs and in seconds, Kovalev literally ran over to his doomed opponent, landed a colossal right hand and two ancillary lefts to the cranium that sent his lifeless corpse plummeting towards the earth. A totally oblivious Ismayal Sillakh made a paltry attempt at standing up outside of the ropes and that was all she wrote.

A total of 14 punches were all that it took for Kovalev to secure a top spot in considerations for fighter of the year. The Russian, who now resides in Fort Lauderdale, Florida, started off this year with an impressive third round mugging over Gabriel Campillo in which the Spainiard hit the deck three times in round three before the fight was stopped. Sergey would go on to stop the next three of his opponents including Cornelius White, who he dispatched in three and the United Kingdom’s Nathan Cleverly who was stopped in four – topping it off with his win on Saturday.

After the fight, HBO’s Max Kellerman asked Sergey Kovalev Tell me how you measured him for that right hand.” I, max, I just did it. It is result of my hard work in the gym for automatic. I wanted this fight for long time and I hope I put very big gap between me and Sillakh.” Kellerman would go on to ask, What was it about Sillakh that brought that out in you? “I just I get uh I, I get in the ring and I get all my money in the ring, I get my money and a very big hi my family…everybody supports me you know I got everything in my knuckles.” Thanks for that one, champ.

Sergey Kovalev would go on to say that he wants a fight with “Adonis”. The southpaw “Superman”, Stevenson was headlining the same card in hopes to drum up interest in a legitimate light heavyweight unification match between the aforementioned Russian and Canada’s Adonis Stevenson.

Adonis Stevenson faced some resistance from Liverpudlian, Tony Bellew before trapping his man in the corner and forcing a referee stoppage. Read about the action in its entirety here.

Stevenson is another surefire candidate for artist of the year. His calendar 2013 campaign began with an avenging of his sole defeat to Darnell Boone, which was a second round TKO back in 2010. Although the American, Boone had 20 losses on his ledger prior to the rematch with Adonis Stevenson, the exciting way that the reinvented Superman dispatched his victor was impressively violent.

Following that knockout victory, Adonis Stevenson captured the WBC light heavyweight title from Bad Chad Dawson with just one punch. Not even three months later and the Superman displayed fantastic skill in shutting out former IBF champ, Tavoris “Thunder” Cloud before making him quit on his stool after the seventh round.

Adonis Stevenson didn’t seem to express interest in facing Sergey Kovalev, however. When prodded by further by Max Kellerman after his victory over Bellew, Stevenson finally would go on to say that he would fight Kovalev if HBO put up enough money. He would go on to say that the fans want him to fight with Carl Froch and Bernard Hopkins; the crowd, of course, was silent in response.

Thanks for joining us again this week, another cream-laden Sunday Brunch awaits you next time when we talk about the outcome of the all Brooklyn brawl when Paulie Malignaggi takes on Zab Judah in a match that I think will be closer than some suspect.  We’ll also touch on the Devon Alexander and Shawn Porter showdown and of course, we will have random insights, musings and perhaps a cooking tip or two.

Speaking of cooking tips, to make a delicious and quick vinaigrette, take ¼ cup of balsamic vinegar, ¾ cup of olive oil, ½ tsp brown sugar, 1 clove of chopped garlic, 1 small diced shallot, 1tsp Dijon mustard,  a pinch of sea salt and some freshly cracked black pepper (some xanthan gum can be added as well to prevent the oil from ever separating from the vinegar, but it’s not necessary). Put all ingredients together in a jar (think used spaghetti sauce), close the lid and shake vigorously; viola. Add a touch of crumbled blue, feta or gorgonzola cheese and pour over some fresh arugula and a halved hardboiled egg and you won’t regret it. Until next time, santé.