Bonjour et bienvenue famille to a hot and buttery croissant scented edition of Quebec’s 42nd most popular loosely food-themed, quasi-comical pugilistic paper. We are the squeaky cheese and veal gravy to your deep fried, full-fat diet. This week we’re going to touch on what occurred Saturday night from the Bell Center in Montreal, Quebec when two of Canada’s favorite adopted hometown boys fought it out for…well, one fought it out…well there was that last round…anyway, there was a professional boxing contest and we’re probably going to talk about it. 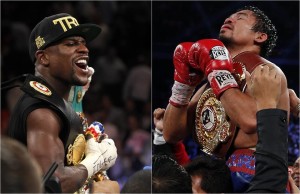 Also on tap, we glance at some of the “news” floating around the web regarding Manny Pacquiao’s latest alleged passive-aggressive shout out to Floyd Mayweather. Next, we look at the pros and cons to purchasing used lawn paraphernalia from Craig’s List and then finally we wrap it all up with a nice bow tie when we teach you a bit about making caramel. With that being said, I gave you your instructions in the dressing room, what I say you must obey – Cuidate, escucha me, toca los manos y buena suerte…Let’s get it on!

Having taken the entire 2013 calendar year off in an effort to continue to lick the wounds sustained in the bout with Nottingham’s Carl Froch (where the formerly undefeated Romanian export was exposed and stopped inside of five), Lucian Bute registered his second loss this Saturday to the quick, but sloppy-handed Jean Pascal.

Pascal, who’s now being groomed by former rap superstar, Roy Jones, looked to have a renewed sense of vigor and tenacity. The Haitian’s stratagem was to try and emulate the aforementioned Brit’s game plan and attempt a swarming of Bute along the ropes. Bute this was not to be, the longtime IBF super middleweight champ was able to avoid the majority of the fast flurries, but ultimately was unable to do much of anything else until the final round.

By the conclusion of the Pascal dominant back-of-the-head thumping it finally seemed as though Lucian Bute found his rhythm out of the sea of quick, but sloppy attacks. At first it appeared that Jean Pascal was playing coy, lying back amidst the long awaited volley from the man presumably too far down on the cards and too battle-weary to really be much of a threat. It was Bute, who finally overcame his fear and started punching the punched-out Pascal. 15 rounds and perhaps the outcome would have been different (or with Marlon Wright refereeing), but the fun adage ‘too little too late’ is being bounced about today and it does seem rather appropriate given Lucian Bute’s effort.

In other fake news, former 15 division title holder and lead elf commander in THIS movie, Manny Pacquiao has shared his sentiments regarding a new strategy to get Floyd Mayweather in the ring with him with a popular Filipino sports website.

According to the article, Pacquiao “dared” Mayweather to “face him in the ring and donate all the proceeds of the fight to charities around the world.” To be quite honest, this is probably the best plan I’ve heard his camp come up with in all the years of failed fake negotiations.

“I’m not desperate to fight him just for the sake of money or material things (said no one ever with 68 million in debt). I’m not the one seeking this fight rather it’s the boxing fans all over the world. I am ready to submit myself to any kind of stringent drug testing (finally?). Above all, I challenge him to include in our fight contract that both of us will not receive anything out of this fight. We will donate all of the proceeds of the fight – guaranteed prize, should there be any, gate receipts, pay-per-view and endorsements – to charities around the world”.

Pacquiao would go on to proclaim “I have carved my own niche in the annals of boxing. There’s no reason why I should be desperate to fight him. But, since the boxing fans worldwide are seeking and demanding [a] Pacquiao – Mayweather fight, I don’t want to disappoint them.” – Selfless bold and noble.

While this is a clever bit of marketing and public baiting from the Filipino congressman, it’s still doubtful that Mayweather will bite. There are four more fights yet on his gigantic money contract from CBS/Showtime and boxing’s brightest star seems steadfast in his position of never doing business with (Manny Pacquiao’s promoter) Bob Arum again. There always lies the glimmer of hope within boxing’s faithful that the match they’ve craved for years will yet come to pass.

Did you know that there is a difference beyond linguistics and regionality to differentiate between caramel and carmel? Many use this term interchangeably, however, this is incorrect. Caramel is melted sugar that incorporates dairy, such as heavy cream and/or butter. Carmel is simply the melted and caramelized sugar. A good example of this would be peanut brittle, this is known as a dry carmel. Those chewy, buttery caramel candies are a good illustration of the more traditional caramel.

To make a perfect salted caramel sauce take 1 ¼ C. white granulated sugar and place it in an even layer in a non-reactive, high-sided pot. Let cook on medium heat stirring occasionally to eliminate clumps of sugar, eventually the contents of the pot will melt and begin to bubble. At this point keep a sharp eye on the cooking progress as it takes literally 2-3 seconds to go from perfect to absolutely fucked.

You’re looking for a nice amber color to show up among the boiling liquid sugar. Once a perfect, slightly darker than golden hue is achieved pour (while whisking and shielding your hands & eyes from boiling liquid or steam 3rd degree burns) 1 cup of heavy cream in off of the heat. Return to a low heat temporarily to loosen the now coagulated clumps of sugar. Once your mixture is homogenous, immediately remove from heat and place in a wide bowl (more surface area = faster cooling time) along with some vanilla (paste if you have it, extract if you must) and some good flaked sea salt, I prefer fleur de sel. Allow time to cool in the refrigerator and you will have an amazing salted caramel sauce to bless your deserts or entrees.

Next time we’ll learn how to make a wonderful toasted sesame and roasted almond peanut brittle that is pretty much amazing in vanilla ice cream (savvy Brunchers will incorporate the above caramel sauce into their ice cream as well). Thanks so much for joining us again this week, next time we’re going to tackle the difficult questions facing society such as ‘What would happen if Aliens V Predator just settled their differences on Nickelodeon’s Double Dare?’ and other hard hitting inquiries like ‘What if C A T spelled D O G?’…Until next time, santé.