We live in a time when the word ‘Great’ and ‘Greatness’ has never been used so often, and yet, ironically has seldom been so rare, as it is in boxing today. The active boxers today who can truthfully claim ownership of that rare thing which imbues a fighter with the gift of true greatness, would not take up the fingers of more than one hand. 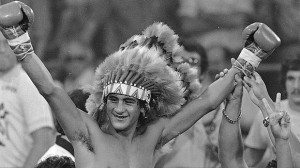 Back in the 70’s and 80’s it was different, boxing was enjoying what will perhaps be its last genuine ‘golden age’ and at times, greatness seemed to be literally dripping from the sport’s skin. The names of these greats are many, some are widely known, others not so well, but one of them, and for a time, perhaps the best of them all, was Salvador Sanchez.  Between May 4, 1975, when he had his first pro fight, and July 21, 1982, the date of what turned out to be Sanchez’s final appearance in the ring, Salvador Sanchez built up a record and reputation that has become legendary.

It’s not often that a fighter can be described as being a ’complete boxer’, but Sanchez is one that can fit easily into this rare category. Sanchez could box beautifully, with a sharp and accurate jab and nimble, almost ballet-like movement. He could also slug it out, having a heavy punch in both fists, which he could deliver with blinding speed and accuracy. Then there was his chin that allowed him to take the heaviest blows, (when he was caught that is) without barely flinching.

Sanchez built up a record of 33-1-1, his only career blemishes coming via a 1977, 12- rounds point’s defeat, to Antonio Becerra for the Mexican Bantamweight title, and a 10-rounds draw with Juan Escobar in early 1978.

When on February 2, 1980, Sanchez challenged Danny Lopez for Lopez’s WBC world featherweight championship, he was unknown, and few gave him a chance against the dynamite punching champion, who was making the 9th defence of his title.  Sanchez shocked the boxing world by not only out-boxing Lopez, but by out-slugging him too. Sanchez peppered the always- attacking Lopez with counters and combinations, and speared him with jabs and hammering right hands, rendering the brave Lopez a staggering mess, with his face a bloody mass. The referee finally stepped in and stopped what had become a slaughter, in the 13th round. At 21 years old, Sanchez was a world champion.

Sanchez showed immediately that he would be a busy champion, making his first defence just two months after beating Lopez, after a tough fight, where he struggled at times; Sanchez out-pointed the clever and tough Ruben Castillo. This was a fight, which showed that the young champion was still developing as a fighter, and was not yet the finished article, as he struggled at times with Castillo’s hand speed.

A little over two months after the Castillo fight, Sanchez made his second title defence, on June 21, 1980, in what was a rematch, with former champion Danny Lopez.  This time, Lopez started fast and tried to pressure Sanchez from the start.  Although this gave Lopez some of the early rounds, Sanchez was merely biding his time, and showing a patience that would become one of his trademarks throughout the remainder of his career. Sanchez soon took over the fight by the middle rounds with his hard and accurate counters, and combinations.  By the later rounds, Lopez was taking a beating again, as Sanchez’s cruel counters and combinations shook, staggered, and bloodied him. As Sanchez upped his attacks and went for the finish, the referee finally stepped in and stopped the fight in the 14th round.

Sanchez made the third defence of his title on September 13, 1980, against the lanky and awkward Pat Ford. Sanchez at first struggled to get past the long-armed Ford jab, but eventually worked his way onto the inside and worse Ford down with an incessant body attack, taking over the fight in the later rounds, to secure a point’s decision.

On December 13, 1980, barely ten months since capturing the World featherweight title, Sanchez made the 4th defence of his title, when he faced young Puerto Rican banger, Juan Laporte. The two put on an all-action, sometimes-wild contest, with frequent toe-to-toe exchanges, but Sanchez edged the rounds with his better technique and accuracy, and he displayed his impressive stamina to outpace Laporte in the last third of the fight. After retaining his title on points, Sanchez showed his class by visiting Laporte in his dressing room, and telling his beaten challenger that he would be a great world champion himself one day.

For his 5th defence, Sanchez faced Roberto Castanon, on March 22, 1981, in what was to be one of his easier defences. After taking his time early on, Sanchez swiftly ended matters, when he turned on the attack in the 9th round, then forced a stoppage in the 10th round after flooring the challenger, battering him again when he beat the count.

Sanchez’s next defence would be perhaps his finest, and would turn him into a boxing superstar.  On August 21, 1981 Sanchez defended his Featherweight crown against Puerto Rico’s Wilfredo Gomez, who was the WBC World light-featherweight champion, and had won all, but one, of his fights by knockout (except for his professional debut, which had been a draw). Gomez had made 13 defences of his light-featherweight title and was seen as one of the most deadly punchers pound-for- pound, in the world. This was the fight in which Sanchez showed his growing greatness, against a man who was considered by many to be invincible.

Gomez started fast, and the two went toe-to-toe from the start, with Gomez forcing Sanchez onto the ropes, and unloading his punches to head and body. A brilliant left right counter by Sanchez, floored Gomez midway through the round, and although Wilfredo beat the count, he was badly hurt, and savagely battered around the ring for the rest of the round.  Gomez displayed amazing heart and strength to comeback in the second round, and attack again, as Sanchez showed his patience once more, being content-to-counter Gomez’s brave attacks with his pinpoint punches. The amazingly high paced fight, carried on like this for another 5 rounds, as Gomez came constantly forward, often with reckless abandon, putting everything into his punches. Sanchez blocked, bobbed, and avoided many of Gomez’s shots, and the ones that he took, barely made him blink. At the same time, Sanchez continued to pepper Gomez with his razor-like counters. By the 6th round, Gomez’s face was swollen almost beyond recognition, with both eyes almost shut, and his nose and mouth bloody. Sanchez stepped up his attack in the 6th, now coming forward and raking Gomez with blows.   The end came in the 8th round. Gomez was exhausted to the point where even his huge heart couldn’t keep him up anymore, and he inexorably collapsed under yet another barrage of Sanchez bombs. Even though he stubbornly beat the count, the referee wisely stopped the fight.

Sanchez was now recognised as one of the premier world champions in the world pound-for-pound, and talked about in terms of future greatness. At still only 22 years of age, he seemed to have many years ahead of him to develop and become even better.

1981 ended with Sanchez defending his title against England’s Pat Cowdell.  This was one of Sanchez’s toughest nights, as the elusive Cowdell proved a tricky opponent for the champion, and gave an inspired performance.  Like all great champions, Sanchez found the punches he needed to pull the fight around. Cutting Cowdell in the 9th round and launching a furious attack in the 14th round ,which culminated in Cowdell being floored in the 15th and being out on his feet at the end of the fight.

On May 8, 1982, Sanchez made the 8th defence of his world title, against Rocky Garcia, in what was a rugged toe-to-toe encounter. Garcia showed he could take Sanchez’s best shots, but Sanchez landed the more punches, and had the greater accuracy. When Garcia’s punches landed, the iron-chinned Sanchez hardly blinked.

Sanchez made, what was to be his last competitive appearance in a boxing ring, on July 21, 1982, in the 9th defence of his world title. His opponent was Azumah Nelson, a future great of the ring himself. Nelson gave Sanchez probably the hardest fight of his career, but also brought out the best in the champion. The two men went toe-to-toe every round, with a weight-weakened Sanchez struggling in the early rounds, but calling on all his reserves to turn the tide, as the fight went into the later rounds.  Nelson was eventually worn down by Sanchez’s attacks to the head and body. In the 15th round, Sanchez came up with some of his most potent punches of the fight, as he floored Nelson with a blistering combination. Nelson beat the count, but was out on his feet and taking another furious assault from Sanchez, when the referee finally stepped in and stopped the fight, with 11 seconds of the contest remaining.

It was a breathtaking fight and confirmed again that Sanchez was a special fighter and champion.  No one knew at the time that this would be his last fight.

On August 12, 1982, Salvador Sanchez died in a car crash, at the age of just 23. His death was particularly cruel, as it robbed him of the chance to fulfill himself not only as a boxer, but also as a man, after his boxing years were over.  He had said that his intention was to become a doctor once his ring career was finished.

We will never know just how great Salvador Sanchez would have become if his life had not been cut so short. Certainly, he had the physical frame to go up at least two divisions, to Lightweight.  In his last couple of defences, he had been battling making the weight.  Had he been granted the chance to move up in weight, the world would most likely have seen an even greater Salvador Sanchez.

However, Sanchez’s legacy is secure. With nine defences in little more than two years and against high quality opposition, (including three all time greats, Lopez, Gomez and Nelson) the word ‘great’ fits Salvador Sanchez very well.