The mandatory rematch ordered by the IBF, to take place between super middleweight champion Carl “The Cobra” Froch (32-2, 23 KOs) and challenger “Saint” George Groves (19-1, 15 KOs), has been agreed upon and set for May 31, according to numerous reports out of the United Kingdom. No venue has been selected as of today. 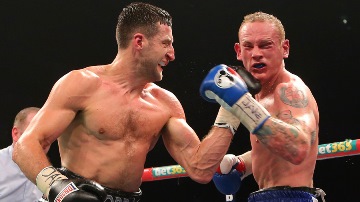 Froch was the beneficiary of a questionable stoppage in his November 23 title defense against Groves. The stoppage occurred in the ninth round after a series of hard shots from Froch, in a fight that was mostly dominated by Groves. Froch was behind on all three judges’ scorecards at the time of the questionable stoppage, and the stoppage was seen as a gift to the 36-year-old Froch.

After the loss, Groves petitioned the IBF, which forced Froch and Groves to agree to a deal within 90 days. Froch, who also holds a ceremonial WBA super middleweight belt (Andre Ward is the recognized champion), could have elected to drop his IBF title and move on to a big money fight with Julio Cesar Chavez Jr., but elected to settle the score with Groves.