Juan “Baby Bull” Diaz (38-4, 19 KO’s) will meet Gerardo Robles (16-12, 7 KO’s) in an untelevised under card bout on this Saturday’s HBO card headlined by the rematch between Julio Cesar Chavez Jr. and Brian Vera. It will be the former lightweight champions’ first bout since scoring a 10 round decision over Juan Santiago in October. He returned to the 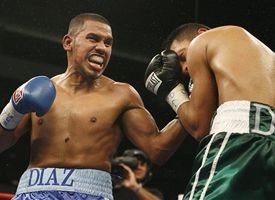 ring last April after a three year hiatus following a loss to Juan Manuel Marquez in 2010. Diaz has held the WBO and WBA lightweight titles, as well as the WBA’s “Super” world title in the same division and the NABO light welterweight crown.