Wilford Scypion who has died aged 55, was a top middleweight during the 80’s when

the great Marvin Hagler ruled the division.  Scypion, who fought out of Texas, was a tough, hard punching fighter, who could box or slug, and took part in a number of crowd pleasing slugfests during a career that spanned 13 years, from 1978 to 1991. 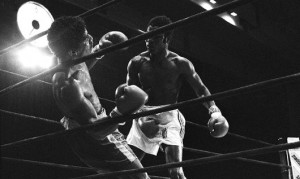 Scypion’s career was touched by tragedy however, when opponent Willie Classen died of brain injuries, after being knocked out by Scypion in the 10th round of their fight on November 23rd 1979.  Scypion had gone into the fight 12-0 with 12 knockouts, while Classen, a former prospect who had seen his career go into a tail spin, entered the fight just 6 weeks after being stopped in 2 rounds by rising British Middleweight Tony Sibson.

The fight itself was long and punishing and Classen was the stereotypical fighter who was too brave for his own good.  Unfortunately he was allowed to be brave right up to the contests brutal 10th round ending.

Classen’s death was a huge blow for Scypion, and although his career continued, it would change him as a fighter, to a degree where sometimes he seemed to lack that certain ‘killer’ instinct in his fights, and the knockouts started to come more sporadically than they had previously.

Scypion became something of a mood fighter, producing sometimes erratic and listless performances, which saw him go 8-3 in his 11 fights after the Willie Classen tragedy, dropping decisions to James Green, and Dwight Davidson, and being disqualified against Mustapha Hamsho, after being knocked out of the ring, and failing to get back in time.

But Scypion rebounded from this uneven run of form, with a 5 fight winning streak, that culminated in the biggest victory of his career on February 13th 1983, when after a gruelling slugfest, he beat highly rated Frank ’The Animal’ Fletcher, winning Fletcher’s NABF title in the process.  This upset victory over Fletcher also gained Scypion a shot at Marvin Hagler, for Hagler’s world middleweight title.  Scypion’s attempt at world championship glory was short and brutal, as a prime Hagler dismantled and knocked him out in 4 clinical rounds.

Following the Hagler fight Scypion went 6-5 in the remaining eleven fights of his career, which included losses to Murray Sutherland and Iran Barkley.  After retiring for 5 years following the loss to Barkley, Scypion made a short comeback in 1990, scoring three wins, before a 2nd round knockout defeat  to Bill Lewis on January 31at 1991 signaled the end of his career.   Scypion’s final record was (32-9, 24kos)