After two fights and twenty-two hard fought and controversial rounds of fighting, Julio Cesar Chavez Jr. (48-1-1, 32koes) finally gained a legitimate victory over Brian Vera (23-8, 14koes) last night, March 1st at the Alamodome, San Antonio,  in Texas, for a redemption of sorts…depending upon who your point of view.

The fight was entertaining, as the mixture of styles and limitations of both sides mixed well to produce a free-swinging contest that had more in common with a barroom brawl, than the sweet science. We had been told in the run up to this rematch that Chavez Jr. was in shape for this fight and that in their encounter last September he had only been 50%.  This time it would be different; we were told. This time we would witness the real Julio Cesar Chavez Jr, lurking beneath the bluster and blubber of what we have seen recently.

To a certain degree, we did get to see a better Chavez Jr. this time, compared to the one who was gifted a decision over Vera last September.  However, this was a fitter Chavez Jr, rather than a ’different’ man, as some pre-fight stories had tried to claim.

The action followed a similar pattern of the first fight, with the main difference being that Chavez Jr. was more active and more aggressive than in their first encounter.

Chavez Jr. made a fast start with some big punches, as if with the intention of getting Vera out of there early, but Vera took the punches well and came back with an attack of his own. As the rounds progressed, it became clear that although Chavez was sharper and more active than in their first match, he was still going to have his hands full with Vera. The two were involved in some good exchanges on the inside, with Chavez Jr. landing the heavier punches, but Vera was busier.  Chavez Jr. started complaining early to the referee about Vera’s head, although it is Junior’s own habit of bringing his head down as he tried to work on the inside that was the cause of most of the bumping.

As usual, Chavez Jr. seemed to be under the impression that the referee was present to assist him, rather than officiate the contest in a fair and balanced way. Unfortunately, the performance of the said official, Rafael Ramos, indicated that he was indeed present for Chavez Jr.’s convenience, rather than to give both fighters fair and equal treatment. Vera was warned early for use of the head and other perceived infringements, which Chavez Jr. chose to bring up in his frequent complaints to the official. It came as no surprise when Ramos deducted a point for Vera in the 8th round, for pushing Chavez Jr’s head down, while Chavez Jr’s own frequent infringements, which included pushing and low blows, were blatantly ignored by Mr Ramos.

Vera was as brave as in their first bout and replied to Chavez Jr’s heavy blows with his pugnacious smile, before retaliating with punches of his own. Despite Chavez Jr. being in much better condition this time round, this was not, the overwhelming defeat that some people had been expecting, but another close and competitive fight. Vera’s volume of punches and tenacity kept him in the fight with the far bigger Chavez Jr.

Both fighters engaged in some brutal exchanges; much to the crowds delight. Vera made the mistake of staying on the inside with Chavez Jr. too much and not using his jab as often as he did in their first fight, which resulted in him taking more punches than he would have done if he had been more mobile. In the later rounds, Chavez Jr.’s size and increased fitness was more of a factor, as Vera tired somewhat, but every time it seemed Vera was wilting under the ponderous heavy blows from Chavez Jr., he would come back with an attack of his own.

Following a big 11th round, Chavez Jr. showed a lack of class in the last round by running round the ring with his hands down and taunting Vera. This display of Chavez Jr.’s bully mentality did not go down well with the crowd, and he was rewarded with a chorus of boos from his own fans.

The win for Chavez Jr. this time was expected, but the scores of 117 to 110 upon the scorecards of Ruben Carrion and Max Deluca seemed harsh to Vera, after what had been another close fight. Judge David Sutherland’s scorecard of 114 to 113 seemed fairer and more accurate of the actual fight that had just taken place.

Did Chavez Jr’s victory equal a redemption? While in the immediate aftermath of the fight there were certainly those ready to jump once more upon the Chavez Jr. bandwagon, the fact remains that even when as fit as he can apparently get, Chavez Jr. was still forced to go 12 hard competitive rounds with a fighter whom he dwarfed in size. Vera entered the ring little more than a pumped up middleweight, while Chavez Jr. once rehydrated, looked to be of Cruiserweight proportions.

The bandwagon will roll on once again now, and Chavez Jr. will be guided into a big fight this summer. One candidate seemed to be Gennady Golovkin, the popular WBA world middleweight titleholder, (although this match may have to be put onto the back burner due to the recent passing of Golovkin’s father.) Another option seems to be a possible rematch with WBC Middleweight champion Sergio Martinez, if he gets through his upcoming bout with Miguel Cotto. It’s no accident that Chavez Jr’s brain trust would prefer that their man to carry on tackling middleweights for now, rather than facing off with a true super-middleweight. One thing that has emerged from the two Vera fights is that even when he is only required to get down to the super-middleweight limit on weigh in day, Chavez Jr. still struggles against any fighter who has the heart and toughness to stand up against his bullying strength and power.

Sakio Bika’s coronation as WBC world super-middleweight champion last year, after the title was shamelessly ripped from the head of an injured Andre Ward, was a blatant manuvoure to secure a ’safe’ title holder at 168 for Chavez Jr. to challenge.  However, Chavez Jr. has had his limitations exposed in both of his fights with Brian Vera and there is no guarantee that even the ring-worn, but awkwardly tough Bika, would in reality be a ’safe’ target for Chavez Jr. None of the current super-middleweight titleholders looks to be an easy option for Chavez Jr., bearing in mind that he would still be out-weighing them on fight night by at least 14 pounds. If Chavez Jr. can struggle with a fighter like Vera, while holding a huge weight advantage over him, then the top Super-middleweights would present a much bigger problem for Chavez Jr. to get over.

As for the light heavyweight division, Chavez Jr. would find it even harder in a division populated by knockout artists Adonis Stevenson and Sergy Kovalev, and the ageless technical genius, that is Bernard Hopkins. Therefore, Chavez continues to look at the middleweight division for opponents, even though he is now unable to continue the charade of pretending that he himself is a genuine middleweight.

Perhaps the answer is for the WBC to introduce a new championship, just for Julio Cesar Chavez Jr., the catchweight championship. Chavez Jr. could defend against all- comers, as long as they were from the Middleweight division or lower. The results would almost be guaranteed to be entertaining. 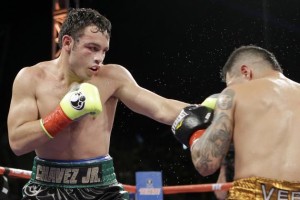 Julio Cesar Chavez Jr., Catchweight king, it has a kind of pleasing ring about it.  It is likely to be the last true title that this poor little rich boy will win.