Immediately after Saul “Canelo” Alvarez (43-1-1, 31 KOs) dismantled Alfredo Angulo (22-4, 18 KOs) earlier this month in San Antonio, Texas, media and fans alike began to wonder what’s next for the Mexican superstar. There’s little doubt that many pugilists from the 147 to 160 pound divisions would welcome a big money bout 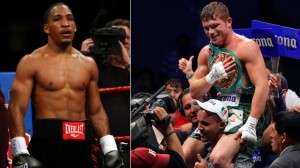 against Canelo. WBA junior middleweight champion Erislandy Lara (19-1-2, 12 KOs) went as far as crashing the 23-year-old’s post fight press conference in an effort to coax him into accepting a match.

It appears as if Canelo has his pick of the litter; but this is not the case.

Conflicts between promoters and networks have shrunk the pool of potential foes considerably. Combined with the fact that some possible challengers are already committed to upcoming bouts; and the search for a July 26 (date of Canelo’s next fight) opponent becomes that much harder.

That being said, there is a fighter in particular who’s accomplished, isn’t tied to a network and is available.

Few active boxers bring more excitement to the ring than Kirkland. He’s won five consecutive bouts and is coming off an impressive sixth round stoppage over the previously unbeaten Glen Tapia (20-1, 12 KOs) in December. He recently signed with rapper 50 Cent’s SMS Promotions and is trained by the blunt and extreme former women’s champion Anne Wolfe; both of whom add an element of entertainment to a fight’s promotion.

The boxer-puncher Canelo and brawler Kirkland have exciting styles inside of the ring, but they’re polar opposites outside of it. The former is a pretty boy prodigy with a rock star following and the latter is a rugged blue collared Texan who’s had his fair share of struggles with the law.

Some boxing purists would argue that Lara’s the better choice. The former amateur world champion is a southpaw with enough talent to give anyone fits. But last year’s draw against Vanes Martirosyan (34-1-1, 21 KOs) shows that he’s capable of producing the occasional stinker. A Canelo-Lara fight would be intriguing; but if the lead-up is anything like the subtitle-heavy Canelo-Angulo “All Access” snoozer, it’ll be a long, tedious journey to July.

For Canelo—who’s trying to transfer his popularity in Mexico over to mainstream America—Kirkland could be the better immediate option. The possibility of returning to Texas (where he once attracted over 40,000 spectators) to fight a native Texan would make the Canelo-Kirkland ticket that much hotter.

Whether it’s Kirkland or Lara who gets the opportunity, let’s just hope Golden Boy Promotions is looking in that direction; because the rest of the field is questionable, at best.