When 50 Cent launched SMS promotions in 2012 many wondered if his success in the music industry would transfer over to boxing. Since making an initial splash by signing Andre Dirrell and Billy Dib; 50 Cent has yet to have one of his fighters headline a major card on HBO or Showtime. 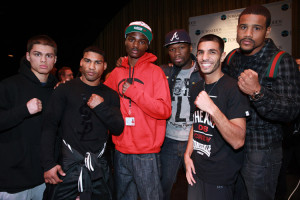 He later added Yuriorkis Gamboa and James Kirkland to a roster filled with high profile contenders and former champions. But much like a ship entering the Bermuda Triangle, since signing with SMS, they’ve all but disappeared off the radar. Let’s take a look at where these four fighters were prior to signing with SMS and where their careers are now.

Yuriorkis Gamboa (23-0, 16 KOs)- After fighting 21 times in four years this Cuban Olympic gold medalist has fought only twice since joining SMS two years ago. Yet, he’s still undefeated and has beaten former champions like Daniel Ponce De Leon and Orlando Solido. But his lack of activity could cost him a future bout against Manny Pacquiao, who himself is running out of options. When a potential bout with Mikey Garcia fell through, it left Gamboa without a scheduled bout in 2014.

Andre Dirrell (21-1, 14 KOs) – A once rising super middleweight, Dirrell was 18-0 going into the 168-pound “Super Six” Tournament in 2009. In the opening bout, Dirrell dropped a controversial decision to current champion Carl Froch. In his next fight he outclassed another champion, Arthur Abraham, before being rewarded the win via DQ. After a lengthy break, he signed with SMS in 2012. Since then he’s fought twice and has no future bouts scheduled.

Billy Dib (36-3, 21 KOs) – This Australian featherweight was 35-1, with a title prior to signing with SMS. He’s gone 1-3 since and dropped his IBF featherweight title to Evgeny Gradovich a year ago. So far, he’s been inactive this year and doesn’t have a match scheduled.

James Kirkland (32-1, 28 KOs) – He’s SMS’s newest high profile signee. In his lone fight under the banner he scored an impressive stoppage over the previously undefeated Glen Tapia. But he’s failed to capitalize off of any momentum gained from the win. Five months into the year and no word on when we’ll see him fight again.

With the “cold war” between Top Rank and Golden Boy still very much alive, SMS could use its neutrality to play both sides of the field. But for whatever reason, they haven’t taken advantage of their independence. Fortunately for 50, he was able to use his notoriety to sign and keep some successful fighters, which fans would like to see. Unfortunately for us, he hasn’t been able to consistently get them to compete.