Wilfredo Vazquez Jr. (23-3-1, 19 KO’s) vs. Marvin Sonsona (18-1-1, 15 KO’s) II
The son of the famed three division world champion, Vazquez Jr. hasn’t fared well in recent years. Once an undefeated WBO super bantamweight champ, he’s run up a .500 record over the last three years, losing his title and two other title opportunities. In his previous outing he took a unanimous decision over undefeated Guillermo Avila to win the vacant WBO International super bantamweight title. In their first meeting, he knocked out Sonsona in four rounds which may give him the urge to start quickly, looking for another quick stoppage. Sonsona has won four contests since being dealt his lone defeat, scoring three knockouts. He’s a former WBO super flyweight title holder as well as a former WBO Asia Pacific and WBO Oriental flyweight champ. He also won a title in his last bout; he brought home the vacant WBO International featherweight title with a third round knockout of Akifumi Shimoda in February. The vacant NABF featherweight title is up for grabs in this one. 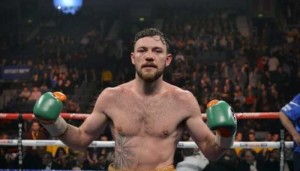 Former world title challenger Andy Lee looks to move himself back into world title contention when he faces Jackson for the vacant NABF light middleweight title. Lee has held the NABA and NABF titles at middleweight, and in a challenge for the WBC world middleweight belt in 2012 he gave Julio Cesar Chavez Jr. a decent run for his money before being stopped in the seventh frame. He’s won four bouts since, albeit against limited opposition but he’s stayed active and done quite a bit of traveling having those four bouts in four different countries. Jackson took his only loss in 2012 to prospect Willie Nelson (who also fights on the un-televised portion of the card), and came back with five straight win, three by KO. Lee will be the toughest challenge thus far for the former WBC Youth World light middleweight title holder.

Jantony Ortiz (debut) vs. Elio Ruiz (1-4) – 4 rounds
The 19 year old Ortiz is a 2011 Pan Am Games bronze medalist and the youngest boxer to make the Puerto Rico national boxing team, doing so at age 16 with a win in the national championships. He was also a 2012 Olympian and competed in the 2013 AIBA World Boxing Championships.

Willie Nelson (21-1-1, 12 KO’s) vs. Darryl Cunningham (29-6, 11 KO’s) – 6 rounds
Nelson is the former NABF light middleweight champ, and has been featured on Showtime. His one loss came in 2011 to Vincent Arroyo in an eight round contest that saw Wilson hit the canvas three times en route to a close majority decision loss. Cunningham has fought opponents on all levels of the game, win a few and lose a few over the last three years. He comes in off a fourth round TKO loss to Cameron Allen last October.

Jose Pedraza (16-0, 10 KO’s) vs. Arturo Uruzquieta (15-5, 6 KO’s) – 6 rounds
Pedraza is the current USBA and IBO super featherweight champion and ranked in the top 10 by the WBC, WBA and IBF He’s is considered one of the best fighters to come from Puerto Rico. Uruzquieta comes in off a third round stoppage of Daniel Valenzuela in September, which was his first bout in over two years’ time.

Jose Lopez (13-0, 11 KO’s) vs. Raul Hidalgo (21-10, 16 KO’s) – 8 rounds
Lopez is looking to grab the WBC FECARBOX super bantamweight title (he currently holds the interim belt) and extend his five fight KO streak when he faces the more experienced Hidalgo. Looking at their records, neither fighter has done anything overly impressive or scored a victory over a decent opponent. Hidalgo comes in off two knockout wins over rookie opponents.

Felix Verdejo (12-0, 9 KO’s) vs. Engelberto Valenzuela (9-1, 3 KO’s) – 6 rounds
The undefeated 21 year old lightweight prospect was a 2012 Olympic quarter finalist and Top Ranks Prospect of the Year for 2013. This will be his fourth fight of the year, scoring stoppage wins in his prior three. Valenzuela scored a knockout over a 0-25 opponent in his last bout, and got stopped himself in the fight prior.