Monaghan entered the ring to the sound of bagpipes and the loudest applause of the night; he bounced around the ring in a green sweatshirt as the crowd chanted “Seanie Seanie”. Right out of the gate Monaghan attacked Muriqi’s body and continued throughout the round, 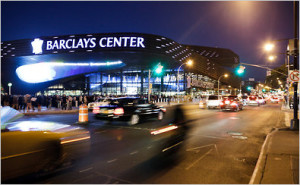 occasionally landing his jab to set up the body attack. In round two, the Long Islander seemed to land every jab he threw and added uppercuts to his arsenal, which had Muriqi glancing up at the lights for most of the second. Monaghan put forth an all-out uppercut assault on the overmatched Muriqi, who leaned against the ropes and covered up for most of the third. If Muriqi’s tactic was to try and get Monoghan to punch himself out it didn’t work, because Monaghan was right back on top of him in the fourth. An overhand right by the undefeated boxer dropped Muriqi at the end of the round, but Muriqi got up angry at himself as if he wasn’t hurt. Monaghan dominated both the fifth and the sixth while Muriqi continued to wave him in and take viscous power shots. Monaghan seemed to lose steam in the seventh, but his earlier body work had done its damage and Muriqi couldn’t capitalize. Monaghan appeared to get a charge in the ninth and beat down Muriqi. But as he walked to his corner, it was apparent that he had suffered a bad cut over his left eye and his right eye was swollen which caused him to retreat and fight off of his back foot for most of the tenth. One judge had it 98-91 and the other two 99-90 all for Sean Monaghan

It was a brawl from the start with Hardy getting the worst of it in round one. Trivilino landed a straight right that seemed to stun Hardy and sent her bouncing off of the ropes. Hardy avoided much of Trivilino’s attack but her face began to show damage midway through the round. Trivilino came out like a bull in the second, while “The Heat” countered, but had trouble avoiding her foes looping shots. Hardy landed a huge right hook that stopped Trivilino in her tracks mid-way through the third, a serious body attack and clean jab at the bell seemed to have won her the round. The fourth was the best round the fight, both fighters came out firing with Hardy fighting off of her back foot and Trivilino getting off first. Hardy answered the bell in the fifth with a badly damaged right eye and seemed to labor through the first half of the frame, but caught a second wind and landed counter power shots that snapped Trivilino’s head back several times in the round. Hardy was breathing heavily out of her mouth in the sixth and her shots didn’t seem to have much snap in them. The Brooklyn native was better at dancing around and avoiding Trivilino in an uneventful seventh, but after some discussion in her corner, the match was stopped before the eighth round. Since the fight was halted by the doctor due to an accidental head-butt, we went to the scorecards. The judges had it 67-66 Trivilino, 67-66 Hardy and an absurd 68-65 for the winner Heather Hardy. The pro Hardy crowd cheered initially but a chorus of loud boos drowned them out, seems like the crowd smelled some hometown cooking in the scorecards.

Papazov looked a bit rusty in round one of his return bout since suffering his first defeat in the Boxcino Tournament. But, by the second, he began to put on a hook show and couldn’t miss his target. He bloodied Mendoza’s nose and sent him stumbling back to his corner at the bell. A straight right sent Mendoza to the canvas at the start of the third and as the crowd cheered the ringside doctor flailed his arms and signaled to the referee to stop the bout, which he did, at 0:36 into the third.

Hardy controlled round one with his long jab and straight right. At the end of the frame he landed a left hook that knocked Terry down. Terry came out aggressively in round two but couldn’t seem to land anything cleanly. Hardy landed another left hook that sent Terry to the mat and ended the bout at 1:02 into round two.

The upset minded Jackson came out throwing wildly in round one, while the undefeated Galeano kept his composure and tried to counter Jackson. Galeano began round two doubling up his jab and keeping Jackson at bay, but by the end of the frame the two fighters were exchanging power shots to each other’s body. As quickly as the bell sounded for the third, Jackson had Galeano cornered. With his back against the ropes Galeano landed uppercuts on the leaning Jackson, still Jackson wouldn’t go away. The two had several furious exchanges during the last minute of the round. The fourth was much of the same, Jackson pressed Galeano and threw wild shots. Galeano countered affectively but didn’t have enough power to put Jackson away. Two judges scored the bout scored 39-37 and one had it a questionable 40-36, all for Galeano.