This Saturday, July 12, 2014, Saul “Canelo” Alvarez (43-1-1, 31 KOs) headlines his third straight PPV when he challenges WBA junior middleweight beltholder, Erislandy Lara (19-1-2, 12 KOs). The MGM Grand Garden Arena in Las Vegas, Nevada will host this “title” fight, (Editor’s note: this fight will not be for Lara’s WBA belt) with Showtime Pay-Per-View airing this fight, along with a full undercard. You can read Phil Rivera’s undercard preview here. 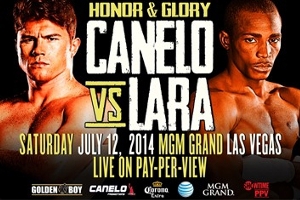 Alvarez, long criticized for a less-than-admirable level of opposition early in his junior middleweight title reign, should be applauded for his recent run of impressive opponents. Since last April’s close decision win over Austin Trout, Alvarez has taken and on lost to Floyd Mayweather and brutalized and stopped a brave Alfredo Angulo in March of this year. And while he would have been well within his rights to tab just about anyone else in the division, Alvarez picked one of the worst matchups in Erislandy Lara.

Lara is a bit of an inconsistent anomaly. Dating back to his fights with Carlos Molina (majority draw) and Paul Williams (majority decision loss) in 2011, up to a 2012 draw with Vanes Martirosyan, he has shown an occasional lack of interest in what’s going on just a few feet in front of his face. When he beat Alfredo Angulo last year, he was in more trouble than he should have been, and was barely winning when Angulo’s eye exploded and the fight was stopped. And despite good hand and foot speed, allowing him to deftly slide about the ring, he can be easy to hit, as seen against Angulo.

Lara is a southpaw, a style only twice seen by Alvarez since his time as a world title holder began in 2011. As stated previously, Lara is also quick on his feet and will give his opponents angles. Lara will have the big reach advantage over Alvarez, which will allow him to keep a jab in his face while he sets up his straight lefts. Lara gets himself into trouble by engaging in unnecessary exchanges and backing straight out with his chin exposed, and as Canelo Alvarez matures as a fighter, you can be sure he’ll be looking to counter as Lara pulls out of exchanges.

Alvarez is only 24 years of age, and has shown a steady learning curve over the course of the last 4 or 5 years. His ability to put his punches together has improved greatly, but he will sometimes fall in love with going with the left hook to the body a bit too often. Alvarez has good power in both hands, but it is his left hook that has produced the most fireworks in his young career. His loss to Mayweather last year proved he still has some flaws and will have trouble catching up to guys with the gift of fleet feet.

Erislandy Lara is no Floyd Mayweather, however. As far as predictions go, this is a fight that is as close down the middle as one can get. Lara is the more skilled fighter with an eye on defense, timing, and a varied repertoire of feints and movement, while Alvarez is the more straight-forward force of the two. It comes down to which combatant is able to dictate the pacing in the early rounds, weather the turn of the tide in the middle rounds, and control the late action. Alvarez will have the edge in punching power and overall professional ring experience. And if Lara is on top form and using every available inch of real estate available to him, he’ll have to work more on cutting off Lara’s escape routes.

Look for Lara to use his movement early, forcing Alvarez into a frantic chase while Lara flicks his right jab into Alvarez’s face. Lara may even have some success with his left hand right down the middle, but he’ll probably absorb a lot of left hooks to the body over the early rounds. Lara’s right hook should make an appearance, if anything, to keep Alvarez honest with his left hook downstairs. As the fight wears on and the distance between the two closes, look for Alvarez’s right hand to become a huge factor. The distance will get closer and closer, and the fighter oft known for his lack of stamina – Canelo Alvarez – will be the fresher and close the show in emphatic fashion sometime around the 10th or 11th rounds.