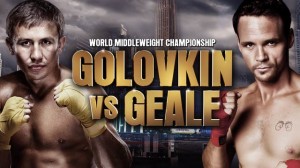 New York, New York- Gennady “GGG” Golovkin successfully defended his WBA middleweight title tonight by defeating Daniel Geale via a third round TKO in front of an impressive Madison Square Garden crowd. It was Golovkin’s first headliner in MSG’s big room and the mostly pro “GGG” crowd did not leave disappointed. Geale showed tons of heart and fought valiantly, but Golovkin’s strength was the difference in the end. In HBO’s co-feature, Bryant Jennings added to his undefeated record by beating Mike Perez and in doing so, put himself near the very top of the American heavyweight scene.

Geale out worked Golovkin in round one as “GGG” landed the heavier shots and sent Geale tumbling to the mat but the ref ruled it a slip; Geale was cut over the right eye at the end of the round. Golovkin scored a knockout early in the second, while Geale was down he complained about a rabbit punch but to no avail. Geale came out with a sense of urgency in the third and made Golovkin look silly a minute in by ducking underneath a few wildly missed punches. A right hand and a left hook dropped Geale in the third and although he got to his feet quickly, he was too unsteady to continue. After the bout Golovkin called out Miguel Cotto for his next fight.

The first was your typical heavyweight feel out round, with both fighters pawing with their jabs; but Perez seemed to pick it up at the end and land some solid body shots. Perez continued to outland Bryant in the third and stunned the Philadelphian with a straight right, while Bryant pot shotted using a clubbing right. The third was an all action round with both boxers landing heavy shots, Bryant seemed to get Perez’s attention with power punch that made him smile, but slowed him down. Perez stayed on the outside in the fourth with Jennings pressing the action, at the end of the round Jennings landed a right hook that sent Perez reeling into the ropes. Perez controlled the fifth and got off first in nearly every exchange, while Jennings fought in a peek-a-boo style; but Jennings had a moment with 20 seconds left in the round where he caught the lunging Perez with a clean combination that made him stumble forward. The only thing exciting about the sixth was the “let’s go B.Y.” chant that the crowd began to try and get their man going. The seventh was Jennings best round thus far, while Perez leaned on him, he continuously stepped back and landed left hooks and right hands to the head of his foe. Jennings continued his momentum into the eighth as Perez breathed heavy out of his mouth and tried to clinch throughout the frame. After an uneventful ninth and tenth, Perez picked it up in the eleventh and appeared to steal the round with affective body punching while in the clinch. Jennings came out on fire in the twelfth and just when it looked like Perez turned the tables he was penalized for a head-butt; after his initial rush, Jennings did nothing and looked spent to end the fight. The judges were split, scoring the bout 114-113 Perez, 114-113 Jennings and 115-112 Jennings.