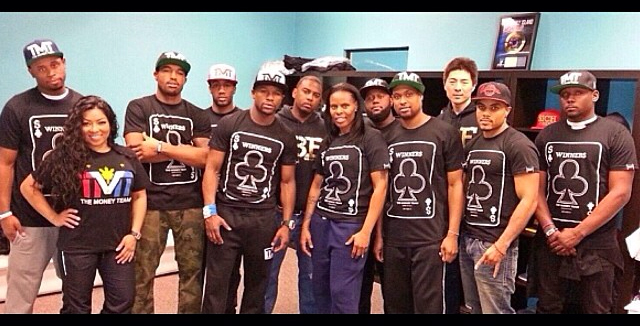 “Hard work! Dedication!” The popular mantra echoes through the Mayweather Boxing Club in Las Vegas, Nevada, while Showtime’s – and previously HBO’s – cameras record Floyd “Money” Mayweather’s training camps. It fills Mayweather’s social media feeds, and has become a major part of his worldwide brand. The members of his “Money Team” echo the sentiment.

The Money Team; what began as a name given to Mayweather and then-friend, rapper Curtis “50 Cent” Jackson and their celebrity entourage, blossomed into a stable of young, potential stars fighting under the Mayweather Promotions banner. Fighters such as Mickey Bey, Badou Jack, J’Leon Love, Ishe Smith, and Ashley Theophane were signed to Mayweather Promotions, and soon began populating the ShoBox, Showtime, and even Pay-Per-View airwaves.

Being a part of The Money Team came with many benefits. Influential advisor Al Haymon pulling the strings from behind the curtain opened up doors for veterans like Ishe Smith and Ashley Theophane, both of whom were long relegated to B-side status. Smith, who fell short at just about every major junction of his career, was finally able to get over the hump when he defeated Cornelius Bundrage to win the IBF junior middleweight title. Theophane, while he was given space on Mayweather’s PPV undercards, came up short against Pablo Cesar Cano and hasn’t yet found his way back into the outer edges of the spotlight. Young guns Bey, Jack, and Love fared well early on against pedestrian opposition, but the going was not all roses and sunshine for the young Money Team stablemates.

Bey’s off-and-on career resumed full time in 2010 with three straight wins over club-level opposition. He took a decision win over veteran Hector Velazquez in his next fight before having a highlight reel KO win over Robert Rodriguez overturned due to a positive test for synthetic testosterone. And when faced with the biggest test of his career, Bey was knocked out in the tenth and final round of what looked to be an eventual decision win over former world title challenger John Molina Jr. Following the setback against Molina, Bey has stayed busy against club fighters Carlos Cardenas and Alan Herrera.

For super middleweight prospect Badou Jack, the future looked bright after cruising to fourteen straight wins to start his pro career. Jack passed his first test by dominating journeyman Farrah Ennis, but struggled mightily to a draw with Marco Antonio Periban in his next outing. Jack would eventually taste his first pro defeat at the hands of super middleweight gatekeeper Derek Edwards, losing by way of TKO in the first round.

Super middleweight prospect J’Leon Love was matched against rugged veteran Derrick Findley in only his thirteenth professional fight. While Love dominated on the judges’ scorecards, he struggled at times against Findley’s relentless pressure and rock solid chin. The struggles continued for Love against veteran Gabriel Rosado. Love’s controversial decision win was overturned by a positive post-fight drug test for a banned diuretic. Love would right the ship with three straight wins before last Saturday’s upset knockout loss to hard-hitting Rogelio Medina.

While it is easy to look at the recent struggles of The Money Team underlings and label these recent dark times the definitive fall of The Money Team. Money Team patriarch Floyd Mayweather remains one of the most beloved, yet maligned boxers in the sport. He is easy to root against, and those associated with him will be caught with the errant shrapnel of the bombs lobbed in his direction. Golden opportunities for the Money Team veterans like Ishe Smith and Ashley Theophane may be hard to come by, but for young up-and-comers like Bey, Jack, and Love, they may be right around the corner. Young fighters sometimes lose to guys they should beat, learn from those losses, and bounce back. Simply put, it is part of the sport. If upsets were not part of the sport, why fight the fights? And while voices in the media such as ESPN’s Dan Rafael carry much weight and often craft the narrative surrounding most of the fighters they cover, setbacks such as Love’s Saturday night loss aren’t exactly “inexcusable”.

Have we really begun to see the fall of The Money Team? Don’t bet Junior’s college fund on it.

The influence of Al Haymon, and even of Floyd Mayweather, who can fill his PPV undercards with his teammates on a whim, will no doubt lead to more opportunities. One look at Mickey Bey, whose two paltry wins over club fighters washed away the stench of a recent PED suspension and stoppage loss, will challenge Miguel Vazquez for the IBF lightweight title on Mayweather’s September 13 undercard, shows how good it is to be a member of The Money Team.