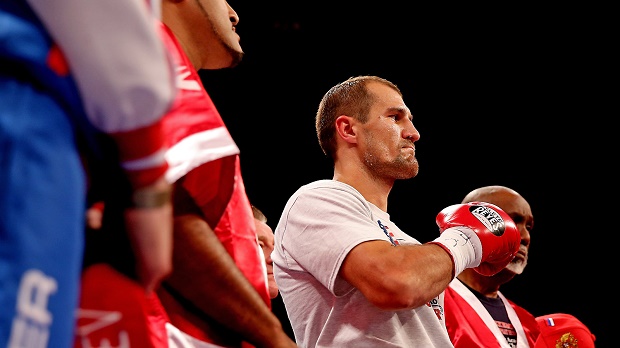 When 31 year-old Sergey Kovalev (25-0-1, 23 KOs) faces the ageless Bernard Hopkins (55-6-2, 32 KOs) on the eighth of November at the Boardwalk Hall in Atlantic City, New Jersey, the WBA, IBF and WBO World lightweight championships will be on the line. The “Krusher” finds himself in a unique position – possessing the youth, ability and talent to give Hopkins his first definitive loss (and possibly stoppage) in quite some time. Here, in an open letter to the Russian, we take a quick glance at the top eight things that Sergey Kovalev must to do defeat Bernard Hopkins…

8. In Mother Russia, ring cuts you off. Make sure that when Hopkins is coming forward you intercept him and continually throw in combinations. When left to his own devices, B-Hop will try and confuse and lure you into well-timed shots. Keep your distance, but don’t let him take the initiative. Thwart his assault with your own.

7. Don’t let the elder statesman take the lead. He’s a crafty veteran and a multi-divisional champion for a reason. Hopkins will try to get in your head and will attempt to swarm and smother your work – You must throw intelligent shots with both hands, but never get reckless – Be first and last.

6. Be mindful of your defense. The best offense…A good…well, I’m sure there’s a sports adage we can throw in here somewhere, but you know where I’m going with this. In your fight with Blake Caparello, a momentary lapse in defense caused you to hit the canvas via straight left. Hopkins, while an orthodox fighter like yourself, will have taken this to heart and will likely incorporate this into his game plan. He can also throw well with both hands, so be wary of the left and carry your guard high.

5. Watch out for headbutts! I can’t stress this one enough. In many of his previous bouts, Bernard Hopkins has found a way to “legally” get away with landing hard headbutts, often times opening gashes on his opponents. In your fight with Cedric Agnew, you showed the “Alien” that you are susceptible to head clashes on the inside, be wary of infighting with the grizzled vet…he will exploit that opening – Bring a good cutman.

4. Body blow, body blow! Your hands are apparently so heavy that what often appears to be ‘just a touch’ will usually send your opponent crashing down to the mat. By the time November 8th rolls around, Bernard Hopkins will be close to 50 years of age. Test his midsection with well-timed power jabs, set them up with feigns and you might just wind up gong home early. Do not, however, forego your hooks and lunging punches upstairs. Like the aforementioned stratagem, mix up your offense and never let Hopkins take the lead.

3. Don’t let Bernard Hopkins in your head. B-Hop is a master manipulator, he will let you think you’re having your way in the fight, but slowly you will be slipping into his game, buying into his tricks and by the end he’ll have your lunch money and you’ll be buying a car stereo from him that looks suspiciously like the one you are missing – Keep to your game plan and don’t take a back seat in the action.

2. Conserve your energy. This could very well turn out to be a marathon rather than suicide sprints – Hopkins tends to drag out encounters, which works in his favor. His endurance is otherworldly for his age…and likely for yours as well. You have been the distance one time in your professional career (an 8 round SD against Darnell Boone back in October of 2010), so it will behoove you to incorporate a lot of stamina drills into your training regimen.

1. Be relentless! Test the old man – Sit down on all of your punches and never let him off the hook in the event that you have the ageing champion hurt. If you manage to pin him on the ropes, use your natural finishing instincts to move in for the kill. Do not respect his craftiness or power, but be mindful of it. Unload power punches and don’t neglect head and lateral movement. Strike like Chelyabinsk meteorite, hammer like Kalashnikov and find win for Mother Russia!