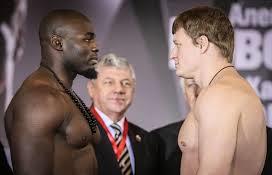 Povetkin, who held a paper version of the WBA’s heavyweight crown (Wladimir Klitschko is the recognized champion) from 2011 to 2013, is angling for another potential title shot. This time, however, Povetkin is going the route of the WBC, where he currently sits in the number three spot in the rankings. Carlos Takam is currently ranked number five by the WBC, and Takam’s WBC Silver heavyweight title will be on the line when these two meet.

Povetkin comes into this fight having righted the ship after suffering his first career loss to Wladimir Klitschko last October. Povetkin returned in May and scored a seventh round KO win over former heavyweight title challenger Manuel Charr.

Takam, fighting out of France by way of Douala, Cameroon, has fought impressively in 2014. After stepping up and taking out gatekeepers such as Frans Botha and Michael Grant, Takam arguably wound up on the wrong end of a bad decision when his ten round brawl with Mike Perez was scored a majority draw. In his last fight, Takam scored a points win over recent upset specialist Tony Thompson to win the vacant WBC trinket.

Povetkin goes into this fight giving up a lot of size. Takam usually steps into the ring tipping the scales just shy of 260 pounds, while Povetkin is usually around 225 pounds. Takam is a volume puncher and has shown decent stamina and looks to be getting better as he progresses. At 35 years of age, Povetkin will be hard pressed to up his work rate in hopes of keeping Takam off of him.

While Povetkin has the championship pedigree and experience, his reluctance to fully challenge himself throughout his title reign lead to some digression in his form. As he’s aged, an inability to keep up a high work rate and move swiftly enough to get inside of larger men has started to show. Carlos Takam has the look of a fighter on the upswing, while Povetkin is stranded in neutral. Don’t be surprised to see a Carlos Takam upset, and he positions himself one step closer to Bermane Stiverne and his newly-won WBC heavyweight title.