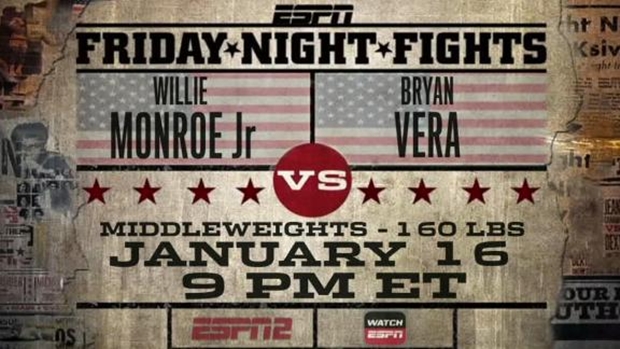 It’s a new year, and with the new year comes resolution time. This time, the resolutions will be made at the Turning Stone Casino in Verona, New York on ESPN2’s Friday Night Fights. For Bryan Vera (23-8, 14 KOs) and Hammerin’ Hank Lundy (25-4-1, 12 KOs), that means getting off the train to Palookaville and back on the waterfront looking out at the endless sea of title shots and legacy-making fights. Vera takes on Willie Monroe Jr. (18-1, 6 KOs), while Lundy does battle with Petr Petrov (35-4-2, 16 KOs). If those latter names sound familiar, they should; those two men won ESPN’s mini-tournament “Boxcino” last year at middleweight and lightweight, respectively.

It is no secret that your columnist is a big fan of Hank Lundy (see Southpaw columns #58 and 59), so it is that much harder and more painful to have to break the news to the Philadelphia-based fighter that this is your last chance, champ. You lose this one, you’re spending the rest of your career as a mid-card co-feature gatekeeper, which will keep you in high-four-figure paychecks rather than millions. Even though all four of Lundy’s losses were defensible individually (from the quick-hook stoppage against John Molina through the questionable decisions against Ray Beltran and Thomas Dulorme to even the unanimous but close decision loss to Viktor Postol), taken collectively they start to form a pattern. John Molina went on to bigger and better things, putting on what the FNF desk voted for as Fight of the Year in 2014 against Lucas Matthysse. Hammerin’ Hank has had no such good fortune in drawing a high-profile matchup, seeming to fall just short when the time comes to step up and make a case. It happened with Beltran; it’s happened again with Dulorme. Sure, it keeps him on ESPN, but nobody ever got rich fighting on ESPN unless it was a stepping stone to something else (Micky Ward, looking at you.)

Petr Petrov, on the other hand, might be the perfect patsy to put Lundy over. Petrov’s punching power is untested against guys who can actually take a shot, and his only truly high-profile fight in his career involved the native of Ryazan, Russia getting starched in four rounds by big-hitting Marcos Maidana in 2009. Winning Boxcino may grab a headline with FNF fans, but a guy like Hank Lundy, who has come up off the floor to beat a former world champion (David Diaz, who had himself once beaten Erik Morales), has fought better guys than the Russian. If ever there were a chance for Hammerin’ Hank to silence all his doubters, now is the time.

Up the scale at 160, Bryan Vera (now spelling his name with the Y he was born with rather than the I he used professionally for years, for reasons unknown that Todd and Teddy will hopefully enlighten us on come fight night) has an even bigger problem than Hank Lundy. Vera not only has a pedestrian record, but his fight with Sergio Mora was one of the dreariest, most sleep-inducing main events FNF has ever put on (and FNF has put on a lot of snoozers over the years.) Vera isn’t just rescuing his career after twice getting the crap kicked out of him by Julio Cesar Chavez Jr. He also needs to prove to a television audience that he’s worth turning the TV on in order to watch. He needs to win in thrilling, SportsCenter highlight fashion. So far, Vera hasn’t been able to do that.

His opponent standing in front of him doesn’t offer many opportunities for thrills; the feather-fisted Willie Monroe has a low knockout percentage in which his six KO victories all came against the kinds of guys who hit the ground at the mere suggestion of getting hit, guys who are on the level we saw last week with Dominican fraud Kendal Mena. Bryan Vera is many things. He is boring, he is pedestrian, he is “journeyman” personified. One thing he is not is an easy out by the KO route, as both guys to have stopped him were big punchers—first Jaidon Codrington on “The Contender” in 2007, and then dynamite thrower James Kirkland a year later. Willie Monroe is not getting a knockout tonight; he will do well to exploit his advantage in speed, trying to box rather than engage.

What happens when a boxer faces a boxer and neither guy has the explosive power needed to make the highlight reel? Anyone who saw the Sergio Mora fight knows how this might go. We can hope for a lucky shot to change the inevitable, but win or lose, this is probably Bryan Vera’s swan song. If he loses (and that seems the more likely outcome), he’s toast. Even if he wins, since it won’t be in a fan-friendly way, he’s still toast. Bring on the bacon and the eggs; we’re gonna need some help eating all this delicious burned bread.

Friday Night Fights airs January 16 at 9 PM Eastern/6 PM Pacific. The Boxing Tribune will have full coverage of the night’s action, including any swing fights that make air, following the conclusion of the broadcast. Keep it here—we’re the worldwide leader in covering the Worldwide Leader.

Fox Doucette writes the weekly What If series and covers ESPN Friday Night Fights for The Boxing Tribune. His weekly opinion column, The Southpaw, appears on Thursdays. Fan mail, hate mail, and a time machine so Fox can be the one to knock up Zooey Deschanel can be sent to beatcap@gmail.com.