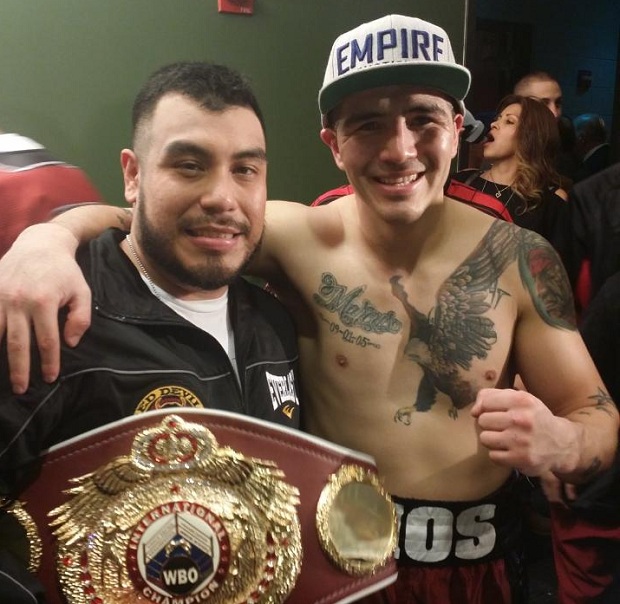 The perception of fighters making weight and maintaining diets is often bleak and unappetizing. Picture Rocky Balboa gagging down raw eggs. Imagine unpalatable meals- ground turkey, carrots and apples- poorly prepared, not that great nutrition wise, and totally lacking in imagination. Those things combine to leave a fighter both hungry and frustrated. Definitely a recipe for disaster.

Brandon Rios dealt with weight struggles, but eliminated the issue during his last two fights by employing chef Juan Chan. “He keeps me not hungry so I don’t cheat on my diet,” Rios said with a laugh. “With his cooking I made weight perfect. He does an amazing job.”

At 28, Juan is not yet a household name to culinary enthusiasts but he’s becoming well known in boxing circles and carrying on in family footsteps.

“I became interested in cooking when I was seven,” Juan said. “I learned a lot from my parents. Practically my whole family are chefs. I used to go into the kitchen with my dad when I was a kid. He worked at a restaurant near Le Cordon Bleu in Pasadena, so every time I visited him at work, I’d see the students. And I said I’d go to that school.”

Juan did get the Cordon Bleu training, and combined those skills with his early family experience. But it was his mother, Elsa Chan who ushered them both into boxing, and worked for both Fernando Vargas and Robert Garcia when they fought.

“My mother worked at Cholo’s Mexican Restaurant,” Juan said. “Fernando Vargas ate there, and he hired her. I was 15 when she came home and said he offered her the job. From then, I remember my mom did all the healthy stuff, and it was really interesting. From there I told her I was interested in working with fighters.”

By this time, Elsa had made friends in the boxing industry, and Juan was on his way. His first assignment was working with Ponce de Leon when he fought Jhonny Gonzalez, Ponce then referring him to Jesus Soto Karass. “Soto Karass started referring me, and I met other trainers from Mexico,” Juan said, “ then I worked with Omar Chavez. People started getting to know me.”

Social media also played an important in Juan’s increasing popularity. “I started posting food photos, and who I was cooking for on Facebook, and with the fighters eating my food, and got lots of good comments and questions from other fighters.”

Being in the right place at the right time led to Juan’s next assignment. Juan was visiting Robert Garcia in Oxnard when Marcos Maidana was in the gym. He overheard Maidana complaining to Alex Ariza about the chef they were using.

“Ariza asked me who I had worked for, then his assistant James called and asked if I’d cook for Maidana for the first Floyd fight. The initial meal Juan prepared for Maidana- a well done rib-eye and mashed potatoes, won him over. “Ariza approved and Maidana liked it,” Juan said, “and the job was mine.”

When Ariza left the team, Robert Garcia called Juan and asked if he’d like to work with Brandon Rios, and that’s when he became more involved with his teams. His growing list of fighters include Jesus Cuellar, Felix Diaz, Rios, and David Maidana.

Juan works with his fighters only during training camp, and has been able to teach them nutrition can be a positive thing. He says Brandon Rios is a perfect example.

“Rios at first was not supposed to be very disciplined,” Juan said. “I took it as a challenge and made it very positive for him. I taught him you don’t have to kill yourself to eat well.”

“He wasn’t used to positive support and nutrition,” Juan continued. “He’d eat fast food so it (eating healthy) was new for him. I wanted to prove people wrong who said he had all these problems . He made weight perfectly for Chavez and Alvarado, he said he felt strong. His color was even better.”

One of the positive things Juan did for Brandon was make a hamburger, but not your greasy, fast food variety. He used a lean cut of beef, which he ground, then seasoned, served on a good wheat roll. Better prepared, with fresh, choice ingredients gave Rios a better hamburger than the fast food he was craving, and satisfied him enough to keep with the good training diet.

Variety and creativity are two things Juan employs when cooking for fighters, as well as motivating and encouraging them to experience new foods that are healthy and have great taste. Rios and other fighters on the Garcia team enjoy Mexican food, which can be difficult to prepare in a healthy way.

“I buy low sodium condiments,” Juan said, “and I will saute meats with olive oil for flavor, and everything is steamed never fried, and I use wheat tortillas instead of flour.”

“I try to do something different every day,” Juan said, and offered breakfast as an example. “Blueberries in oatmeal, with cinnamon, and OJ or egg whites, turkey bacon, with wheat toast and a natural juice like pineapple. I try to switch it up so they don’t get bored with the same foods.”

The difficulty in maintaining and developing the clean eating habits Juan says depends on the fighter. “They have different ways they maintain,” he said. “I don’t think it’s too difficult. But after they get out of camp and go back to old habits, the first week in camp is a little frustrating,” he admits. “Getting them back into the healthy routine when they’re not used to it. It’s almost like taking care of kids,” he laughed. “You have to keep them motivated so they will listen to you.”

When he’s not in camp with fighters, Juan stays busy as a sports therapist at a clinic in Los Angeles and enjoys cooking for himself, making authentic, international Mexican cuisine. His favorite dish to prepare is pork with achote sauce, wrapped in banana leaves. Juan also keeps an eye on his peers in the culinary world, noting Chefs Gordon Ramsay and Rick Bayless as some of his favorites. “I would like to cook with Ramsay,” Juan said of the chef noted for his outrageous temper.

Chef Ramsay might have met his match if Juan has as many boxing skills as he does in the kitchen.