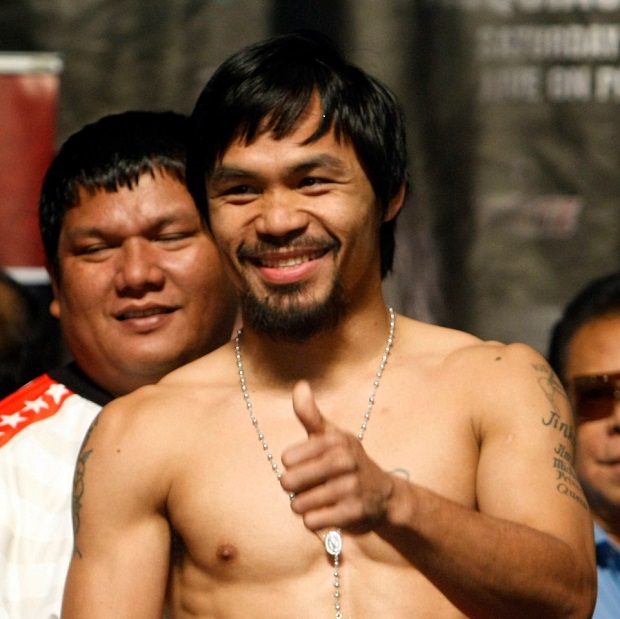 “…But, do you at least think there’s something that Pacquiao could have done more to ensure a win…? – Reporter

“Yeah. Take his shot before the fight.” – Bob Arum

Hola Amigos y familia, welcome to a one-armed, heavily medicated edition of Panama City’s highest rated, most money-spinning proper pugilistic paper, The Sunday Brunch – We are the Super Soaker of truth hosing down the titties of the boxing spin machine. This week we are taking a further look at the details surrounding one of the most blatant media misdirections in history. People are believing what they are told and not what they can see and we are about to give the person to blame some major rectal surgery. With that being said, I gave you your instructions in the dressing room; what I say you must obey – Cuidate, escucha me, toca los manos y buena suerte…Let’s get it on!

The unanimous decision loss to Floyd Mayweather this year was predictable for some, but harder to accept for others. The defeat caused an avalanche of excuses from Team Pacquiao, his promoter, Bob Arum and Manny’s dedicated fan base.

Directly after the bout, Manny Pacquiao was interviewed by hip hop legend, Max Kellerman and stated that he was surprised he lost. “It was a good fight, I thought that I won the fight…He didn’t do nothing he always run and move outside.”

When further probed by Kellerman about why he thought he won and why he didn’t admit he was getting hit frequently by Mayweather, Pacquiao continued “Yeah, I got him many times and I saw the punches and I thought that I won the fight” A brutally honest Max Kellerman told Manny “We didn’t ringside (think you won the fight), the judges didn’t…You usually throw a lot of punches, you didn’t throw as many, why?” Pacquiao went on to explain “He was moving around, it’s not as easy to throw a lot of punches when your opponent is moving around. When your opponent stays [still] then I can throw a lot of punches.” Kellerman lead Pacquaio slightly in his next question when he stated “So, you’re saying that you thought that you were up in the fight is why you didn’t step on the gas in the later rounds?” A defeated Manny Pacquaio only replied “Yes”.

Shortly after “Mayweather Pacquaio”, at the post-fight press conference, a somber faced Bob Arum gestured to Manny to speak to the awaiting media representatives. “…It’s been two weeks, you know, I didn’t train good because I couldn’t use my right arm. We plan to file for an exemption for a shot for numbing of my shoulder, but we respect the decision of the commission that allows it, so we didn’t get the shot. Two weeks, one week before the fight my shoulder was getting better and better at least I can use it.” Pacquiao stated.

When Pacquiao’s trainer, Freddie Roach addressed some questions about Manny’s newly revealed injury, he admitted that it occurred two and a half weeks prior to the bout. An interrupting Bob Arum corrected Manny Pacquiao’s long-time coach with a smug “Uh, I think it’s a little longer than that, Freddie.” apparently the doctors said that it’s an old injury…”. Among mentioning Kobe Bryant’s name several times associated with the doctor in question, it seemed odd that only Bob Arum knew the intimate details of Manny Pacquiao’s new injury. He went on to explain that in the third round Pacquiao’s injury resurfaced.

It seems strange that Pacquiao’s representatives would go so far out of the way to talk about the tear and link it to Kobe Bryant’s torn rotator cuff injury. It’s also unusual that Manny Pacquaio threw punches with his right hand consistently throughout the fight and raised both of his arms in the air both before and after the bout.

When you think of terrible shoulder injuries, scenes from Andre Berto’s 2013 stoppage loss to Jesus Soto Karass come to mind – You could literally see the pain on his face every time he used his right arm. You don’t think of a fight where the hurt boxer showed zero signs of discomfort (aside from when he was getting punched in the face) throughout or after the bout, until he is advised to do so.

Back to the issue at hand, though. Manny Pacquiao and his team requested a shot before the fight and were refused. The drug they requested is called Toradol and with less than five minutes of digging you can clearly see that this medicine is used openly in some sports to numb the body from pain and give a boost of energy.

“Toradol is a wonder drug,” says former All-Pro safety Darren Sharper, who retired last year after 14 NFL seasons. “You get a shot in the butt and within 10 minutes nothing hurts, and that feeling lasts the entire day…” ESPN reported.

Manny Pacquiao’s choice of medication was very specific and it makes one curious if this could possibly be the first time that Team Pacquiao,  who refused and attempted to negotiate “random” drug testing, used this medication before a fight. The Boxing Tribune’s own ninja star-hurling leader reported on this very subject three weeks ago revealing a trove of information about the miracle drug Toradol and how popular and wide-spread it is in major sports.

“It’s the sporting world’s worst kept secret that Toradol has been widely used as a somewhat of a legalized cheat or substitute “pep pill” for otherwise healthy players looking to be temporarily rejuvenated for the game.”

So, let’s get this straight. At one point in time Bob Arum said that Manny Pacquiao was afraid of needles in reference to his refusal to accept a Mayweather fight on the grounds that he will be blood tested…Now, those same people requested an injection for a new/old reoccurring first-time tear of the shoulder in the third/fourth round/two/three weeks prior and/or the night of the fight?

If you have any idea what the absolute fuck is going on here, please feel free to make it known in the comments below.

Send all threatening hate mail to JESSEBOXINGTRIBUNE@GMAIL.COM and check out our cat pics on Twitter @JESSEBOXING. Until next week, sante.