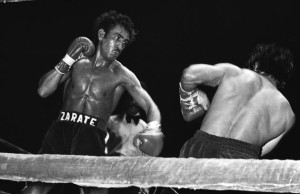 When last we left our series, the WBC and Don King found themselves casualties of a crusading Congressman, and the WBA issued an edict demanding unification fights in every weight class. Most of these fights actually happened eventually in the prime timeline, either as unifications or because public demand for the fight was so high that promoters with dollar signs in their eyes made the fights happen under other circumstances. We’re still close enough to the point of divergence that things aren’t too wild, so settle in and enjoy yourself a nice history lesson.

The Situation So Far

On April 1, 1977, the following champions existed. Note that there’s no such thing as strawweight (which the WBA would not recognize as a division until 1988), junior bantamweight (1981), junior featherweight (November of ’77, although the WBC had already crowned a champion at 122 pounds in ’76), super middleweight (1987), or cruiserweight (1982). With that said:

There were two unified champions already extant—Muhammad Ali and Carlos Monzon. Every other division was up for grabs. There were a few international fights that drew no interest from American television, but the same could not be said for two huge featured events that were the talk of the boxing world. At lightweight, Roberto Duran held the WBA title, but he had Esteban De Jesus breathing down his neck and threatening his legitimacy at 135 pounds.

Meanwhile, at welterweight, Pipino Cuevas held the WBA belt while Carlos Palomino claimed champion status even as the belt that marked his claim passed into historical obscurity with the demise of the WBC.

Finally, at 126 pounds, Rafael Ortega held the WBA belt under the someone’s-gotta-do-it doctrine. Alexis Arguello, the previous champion at featherweight, had moved up to 130 on his way to his destiny in the annals of junior welterweight legend (stay tuned for more on this Friday in Historical Fight Night.) His challenger? Danny Lopez, who some would say was just keeping the seat warm in the WBC for an 18-year-old Mexican kid who was just getting started in the sport and closer than he should’ve been to the end of his short life. We’ll get to Salvador Sanchez later—hold your horses.

The rest of the fights, we’ll give a quick roundup:

With John Conteh moving briefly up to heavyweight, leaving the WBC title vacant, the WBA decided to go forward with a different challenger. Yaqui Lopez was tabbed as the man who would fight for the belt; champion Victor Emilio Galindez won a narrow unanimous decision over the course of 15 rounds to retain his title; this was the same fight that occurred in the prime timeline.

Eddie Gazo was one of the oddest world champions in the history of the sport. He became the WBA beltholder in March of 1977 with a win over Argentine champion Miguel Angel Castellini, but Gazo had, in 1975, been knocked out by a guy (Carlos Obregon) whose lifetime record would end up 3-7-2 and who was in only his second pro fight.

The WBC had another exemplar of the attitude of the time toward the intermediate divisions—in 1977, there was still a lot more reverence for the old-school eight than there is today, and if you had “junior” or “super” in your weight class, it was usually a sign that you weren’t good enough to formally move up in weight. A German named Eckhard Dagge had drawn with Maurice Hope in March after beating Emile Griffith by majority decision in a fight Griffith had taken as a last-minute replacement at a time when the pride of the US Virgin Islands was well on the downside of his career and the lightest he’d been for a fight in five years. Griffith’s record in his last 16 fights stood at 6-8-2; Dagge won by mere majority decision.

When Dagge fought Gazo, however, “narrow win over washed up guy” won out over “got ass kicked by complete nobody.” Gazo re-injured his hand, which he’d originally hurt in that KO loss, and had no weapon with which to repel the assault of the German; the fight was over in nine rounds.

The WBA title at 140 pounds was vacant; Wilfred Benitez, the last man to hold the belt, had moved up to welterweight, where he would win the second of his three world championships at weights that also included junior welterweight and junior middleweight.

With the title vacant, and with the WBC title fight originally scheduled for April 2nd in Tokyo going on as normal, the WBA recognized the winner; Saensak Muangsurin, of Bangkok, knocked out Guts Ishimatsu of Japan; Muangsurin would go on to hold the 140-pound belt for another two years and would fight once in the United States before he retired; Thomas Hearns beat Muangsurin absolutely senseless in front of a hometown crowd in Detroit en route to a third-round TKO.

Samuel Serrano was your WBA champion; Alfredo Escalera had held the WBC belt for two years and defended it eight times. The stage was set for one hell of a fight, but there was plenty of buzz suggesting that the two guys were only keeping the seat warm as Alexis Arguello headed up in weight and started building toward a title shot. In the prime timeline, Arguello would be the man who ended Escalera’s title run in the spring of 1978; here, we’ve got the summer of disco and Saturday Night Fever to blast through first.

Sam Serrano was a journeyman with a belt whose career arc would look awfully familiar to detractors of guys like Demetrius Andrade and Deontay Wilder. He traveled the world fighting lesser competition on the road, which let him hold the title in the prime timeline for almost the entire stretch between 1976 and 1983, losing it first to Yasutsune Uehara in Detroit of all places then, after regaining the title by decision in Uehara’s native Japan (which suggests an ass-kicking was administered), holding it for long enough to run smack into Roger Mayweather in ’83, the fight that effectively ended Serrano’s career.

Here, however, a champion cannot run, nor can he hide, and that meant that before Serrano could resume his road trip, he had to face the music against the guy who was the better champion.

Which is to say that Escalera ate Serrano’s lunch. It only took four rounds.

As mentioned in the opening, the WBA did not actually have a 122-pound division in April of 1977, and wouldn’t for the remainder of the year, but here, with the WBC bringing in a ready-made champion, the WBA simply recognized that belt and started its own lineage based on that.

Which is how Dong-Kyun Yum was champion for all of a month before Wilfredo Gomez won the title on May 23; Gomez would hold that belt for five years, including a brief stretch where, as the WBC did in the prime timeline, the WBA would allow him to move up to featherweight for one title shot, an unsuccessful challenge of Salvador Sanchez. Again, we’ll get to that in a later installment.

The WBA had as its 118-pound champion a guy who hit like a heavyweight and carried himself like a little guy; Alfonso Zamora had 32 knockouts in his 33 pro wins.

Meanwhile, the WBC champion was Carlos Zarate, a guy with a pro record of his own to suggest that padded gloves would still hit like Panama Lewis had been playing around with them. Zarate went 66-4 over the course of his career; he had sixty-three knockout wins.

The division that started the division, so to speak, when the WBC chose 112 pounds as the first place to establish its independence (and as mentioned last week, in the 50 years since, there has never been a WBC/WBA unified flyweight champion). Here, the WBA, twisting the knife into its rival, decided that its champion, Guty Espadas, would be declared exempt from the unification policy. Bad luck for Miguel Canto, who had to give up his belt, but there was always going to be bad blood over the flyweight division. For the WBA, this was the moment where global president Fernando Galindez didn’t just spit on the WBC’s grave; this was the moment where Galindez drank a big glass of Mexican tap water, dropped his pants, and painted the tombstone brown from 15 feet away.

This could not stand in a world of unified titles. Estaba had actually fought in Japan, a 10th-round TKO of Takenobu Shimabukuro on Okinawa 30 years after the end of World War II (a quite different context than a different sort of fight that had taken place there years before), so he shuttled himself off to Kokugikan in Tokyo for a title fight.

Fifteen rounds later, the judges were deadlocked, a split draw. Since the WBA was in charge of deciding a champion, they let their guy keep his belt; Gushiken would continue to keep the 108-pound title lineage locked in the Land of the Rising Sun, where an assortment of champions would hold the belt in various parts of the Far East, from Japan to South Korea to Thailand, for 20 years. In the rock-paper-scissors world of 108-pound fighters, this time the Japanese had won out. There would be pressure from South American little guys throughout, but the title always seemed to end up back in its homeland when it was all said and done.

You’ve eaten the appetizers; the main course is next week. A tripleheader with a never-happened prime timeline main event that is as great a missed opportunity as ever happened in boxing? Palomino-Cuevas headlines, Esteban De Jesus tries to change history, and Danny Lopez makes a move toward carving out a legacy as someone other than the guy who kept the belt busy while Salvador Sanchez got ready to take it from him, all next week as Part 3 kicks the unification derby into high gear. Stay tuned.

Fox Doucette covers boxing news and trends for Boxing Tribune News and writes the What If and Historical Fight Night alt-history series for The Boxing Tribune. This might be a bit more ambitious than strictly necessary, but the Heavyweight Adventure was so much fun…

Fan mail, hate mail, and your favorite unification fights can be sent to beatcap@gmail.com.