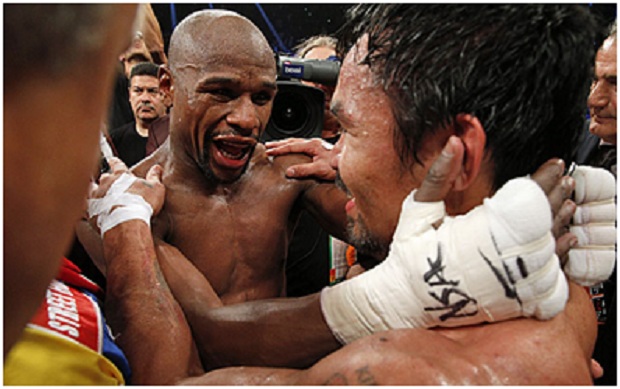 “We don’t have a monopoly. Anyone who wants to dig a well without a Hughes bit can always use a pick and shovel.”—Howard Hughes

Bizarre Examples continue to pour in.

Kellie Maloney: “Boxing is a genuine passion – It always was, and it’s been such a part of my life. “I don’t know how I’ll do as Kellie, because even the way I negotiate is different.”I used to throw my toys out of the pram; I flash my eyelashes now.”
******************
Floyd Mayweather: “He’s a hell of a fighter…I take my hat off to Manny Pacquiao,”

Manny Pacquiao: “I did my best, but my best wasn’t good enough…It’s been two weeks we didn’t train well. I couldn’t use my right hand.”

Mayweather on Instagram: “I love having fun, joking and living life”

Pacquiao: “We should understand Floyd Mayweather Jr. because of his family background. He hailed from a family of ex-convicts and he himself is an ex-convict. We could not blame him because his action just showed the kind of family upbringing he had,… It only reminds me of what he did to his ex-wife. I hope he would find time to reflect on his life and repent for the sins he committed in the past. I still respect him as God’s creation and I won’t resort to such kind of a low blow just to get his attention.”

Bob Arum: “I thought he fought a courageous fight under all the circumstances, and I’m very proud of what he accomplished tonight.”
Arum: “I watched the fight over and over again…without being biased – in addition to the four rounds that (two) judges gave Pacquiao – I gave him the second…’I don’t see how you could take the second round away from him. And the last round as well, which would have made it a draw.’
******************
Wladimir Klitschko: “I’m an artist just like you. I specialize in painting faces in the ring – and my next canvas is Tyson Fury.”
****************
Paulie Malignaggi: “Why can’t Golovkin move up just one weight class to fight Andre Ward?”

Tom Loeffler “Anyone with an 18% KO ratio should not comment on #GGG #HowWouldHe [Malignaggi] Know? 20 KOs in a row.”

Malignaggi: “You’re a moron if you think this is gonna be a one-sided fight [against Garcia],”
******************
Michael Woods (aka Woodsy): “Putting the event on network TV would cause an explosion of goodwill, and after pulling in something like $600 million off #MayPac, I think the time is right to make revenue generation second on the To Do list for the next Floyd fight. I know, I know, I sound like Yankee Doodle Dunce to many of you all. That’s OK…Please consider the move, the mixture of exposure, and humility and goodwill and focus of giving the fans their moneys (sic) worth would net a long term gain perhaps not measured in money. What a happy holiday for a boxing fans (sic) if you guys went outside the box, and blew up the current model, with a ‘Floyd on free TV’ extravanganza.”
******************
Maloney: “I still don’t fancy men”

Devon Alexander: “This is the beginning of the end.”