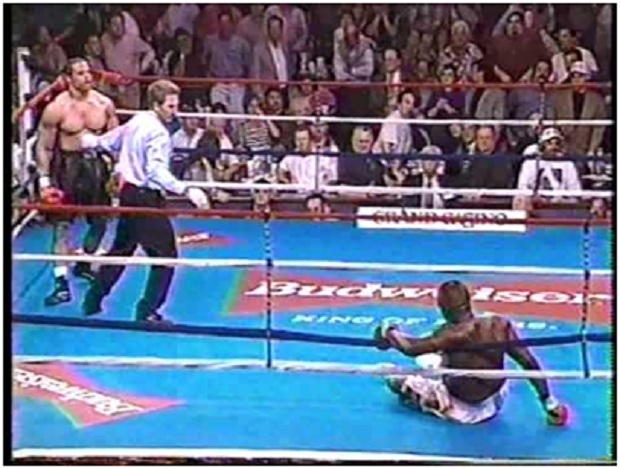 Alexander Dimitrenko stopped Zoltan Csala on July 11, 2015. The fight was held at the GETEC Arena in Magdesburg, Germany. It was the Russian-born Dimitrenko’s second straight win since launching a comeback in May 2015 against Pole Patrryk Kowoll (3-13) whom the Hamburg resident dispatched in the first round. Curiously, this fight was refereed by German Boxer Timo Hoffman (40-9-2). The entrepreneurial Timo is a Referee, Judge, Promoter, and Matchmaker.

King Kong is 26-19-3 and has fought just about every heavyweight out there including fellow-Kenyan Robert Ochung whom the Kong beat seven times, all by stoppage.

On April 5, 2012, Ochieng lost to Bronco Billy Wright by first round waxing at the Capital Plaza Hotel in Jefferson City , Missouri and this begs the questions : what was a Kenyan boxer nicknamed King Kong doing in Missouri in April 2012? Perhaps even more bizarre, Kong stopped David “Nino” Rodriguez (36-1) on July 18, 2014. This huge upset occurred in El Paso, Texas and probably ended Nino’s once promising career.

As for Bronco Billy, he recently scored another first round knockout against late sub and unknown—except in Bolivia—Esteban Hillman Tababary (25-16-2), aka ”Londrito,” last week in Bolivia–Billy’s boxing home away from home. Wright outweighed Tababary by 110 pounds and stood 6’4” to Londrito’s 5’11”. The win was Bronco’s 19th straight since 1998 and his second over the hapless Londrito

The Bean had slaughtered muscular Louis “ The Facelifter” Monaco in 1995, but the “chinny” Monaco had his 15 minutes of fame in 1997 when he stopped Kevin McBride in February and then beat Michael Dokes in April.. That same year, the “Facelifter” knocked out Buster Douglas after the bell to end the first round. Louis was DQd but many observers thought he had been shafted.

For his part, McBride shocked the boxing world when he forced Iron Mike Tyson to retire on his stool and then retire from boxing in 2005.

Now nobody is suggesting that Louis Monaco (16-39-5) could beat Mike Tyson or Mike Weaver. But he did beat the men that beat them. And he also beat Canadian Shane Sutcliffe in 2004, and Shane held a UD over Leon Spinks in1994. Spinks, of course, beat Mohammad Ali in 1978—–so do the math and have some fun.