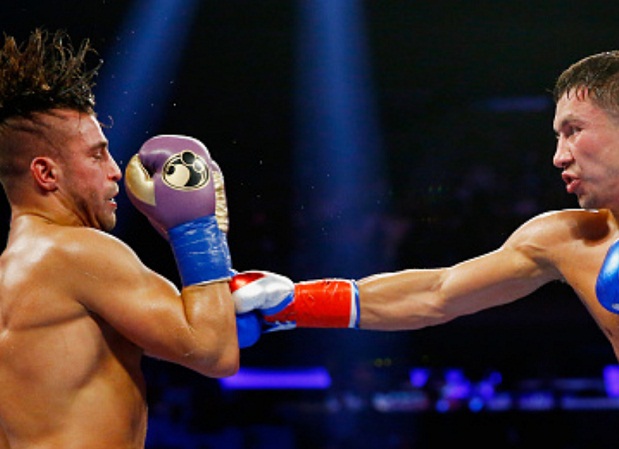 Hola familia y amigos, welcome to a horse meat and pickled pigs dick-scented edition of Panama City’s highest rated, most money-spinning proper pugilistic paper, The Sunday Brunch – We know that you have a stylish Gennady Golovkin themed Trapper Keeper. This week we’re taking a quick gummy dinosaur-sized peek at some of the events that transpired over the weekend. We will give our take, we’ll take your take and we will give it a shake. With that said, I gave you your instructions in the dressing room, what I say you must obey; Cuidate, eschuame y toca los manos…Let’s get it on!

“So last year a PPV main event with a 15-1 favorite was a mismatch/travesty, but this year a 15-1 matchup is fine, no complaints. Gotcha.” – Stephen Espinoza, Showtime Sports

It was quite interesting seeing all the people who actually thought that Canada’s David Lemieux had anything more than a faint hope of defeating Gennady Golovkin. Forget landing a meaningful succession of punches, the banger from the Great White North connected at a very low clip, missing with 82% of his jabs and whiffing 62% of his power shots.

In fact, the way Golovkin was knocking Lemieux around the ring made the Canadian’s 90’s cockatoo hairdo whip around like he was the lead singer of Cannibal Corpse…This could have easily became a Paulie Malignaggi emergency haircut type situation. But, I digress.

Great cat pictures on Facebook and Twitter, Jesse. Do you think that Golovkin looked extra pretty last night? He was super chiseled and that smile and those abs... – Wichael Moodsey

…Thanks for the, uh, email.

Hello Jesse, do you think that super fight with Ward becomes true? Gennady Golovkin fight very hard for people he is number one boxer. – GG

I appreciate you taking the time to write in, GG. Like I mentioned last week, a fight with Andre Ward could come to fruition if Ward gets past the ever dangerous TBA on the undercard of Canelo-Cotto, the winner of that fight will need to face GGG to fulfill a mandatory obligation.

So, it’s possible in the interim, but not likely as the Californian will (rightly) refuse to drain himself to make the fight and Golovkin will need to go up a division, maybe two.

Hey, buddy. Do you have any recipes for a quick custard? I’m so fucking hungry. – Ran Dafael

Thanks for taking the time to write in again, Ran. Sure, I do.

Start with 10 egg yolks and add half a cup of sugar to them and beat well. Add one liter of heavy cream along with another half a cup of sugar and 1 scraped vanilla bean and warm cream mixture until hot not, but not boiling. temper egg mixture and pour into oven safe dishes and bake for 1 hour in a water bath at 325 degrees Fahrenheit. Thank me later.

Golovkin punches very hard. Why do you think that is? – Lavid Demieux

Good question. Has anyone checked his hand wraps? Has anyone noticed any anomalies in regards to getting hit by Golovkin as opposed to another strong fighter? Maybe he is just really strong, it happens.

Jesse, is it possible that Golovkin is just matched really well in order to make him look like an unbeatable beast? Is it possible that all the talk of fighters avoiding him are because HBO is allotting such a small purse for Gennady Golovkin’s fights? – Name withheld

Think I’m an asshole? Think that Lemieux really was going to beat Triple G there? Leave us a comment below and the very best one will receive a special consideration to be entered into some kind of drawing for something or other.

Thanks for joining us for this very abbreviated edition of boxing’s Sunday Brunch. We’ll be back next week with more run-on sentences, ice cold Eskimo titty jokes and made up words. We will have interviews with that fat lady who wouldn’t issue gay marriage licenses and Neil deGrasse Tyson where we will be discussing their new tandem book deal. Until next time, sante.