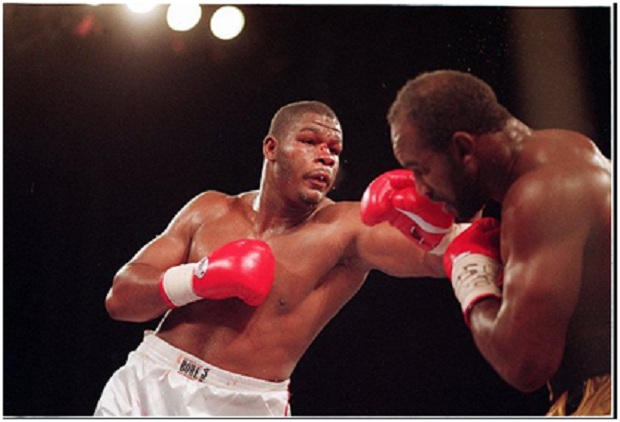 When I visit the boxing past, I like to know something about the era in question. The 90’s were no exception as that decade in boxing seemed like a microcosm of the eclectic times.

Iraqi violates Kuwait’s territorial integrity. We intervene. The importance in the region as a key supplier of oil is critical. The Carter Doctrine states in part that, “… an attempt by any outside force to gain control of the Persian Gulf region will be regarded as an assault on the vital interests of the United States of America, and such an assault will be repelled by any means necessary, including military force.”

The 1991 war (or the “First Gulf War)”as distinguished from the 2003 invasion of Iraq, is “won” big time and restores our pride. Colin Powell and “Stormin” Norman “Schwarzkopf emerge as heroes for a nation badly in need of heroes. President Bush’s popularity rating soared until the apparent success of the military operations becomes just that, apparent. His rating also falls dramatically because of an economic recession. When taxes are raised after “Read my lips,” the Skull and Bones President is done.

Now it’s William Jefferson Clinton’s turn. Eight years of prosperity under “Bubba.” More peace and economic well being than at any time in its history, Despite Monica, he apologizes and continues to have unprecedented popular approval ratings. Bill rules; Hillary lurks. Oral sex is no big deal.

Then, on April 19, 1995, the Oklahoma City bombing claims 168 souls and reflects the evil men can do. Tim McVeigh was a decorated veteran of the US Army, having served in the Gulf War, where he was awarded a Bronze Star. Tim is bad juju. Bill helps us get through this.

Rodney King gets badly beaten by police officers in L.A. in the early 90s while resisting arrest. Somebody films it and all hell breaks loose. The police officers are handed a verdict of not guilty by the first review board resulting in deadly riots breaking out in south central L.A. Several days of anarchy ensue. “Can’t we all just get along?”

The O.J. Simpson case in 1994-95 carried with it an undercurrent as well. He was found innocent—in plain sight!

People read Seven Habits of Highly Effective People and Smilla’s Sense of Snow by Peter Hoeg. They watch The Simpson’s, Cheers, Charles Barkley and Mark McGwire. They watch the Red Wings win the Stanley Cup in 1997 and 98 and the Bills lose the Super Bowl four years in a row. Say what? The NY Yankees win the World Series in 1996 and 1998 with Jeter, Williams, David Cone, David Wells, Clemens and George Steinbrenner. Barcelona wins the Europe Cup. They watch the Cowboys win the Super Bowl in 1993, 1994 and 1996. They watch the Chicago Bulls with Michael Jordan, Scottie Pippen and Dennis Rodman dazzle their way as NBA Champions in 1991, 1992, 1993, 1996, 1997 and 1998. The Bulls are all about Zen, strange hair colors, hatred, greed, magic and greatness. The weirdness of Phil Jackson rules. He is what the 90’s are all about.

A potpourri of slang, styles and clothes permeates the 90s. Mary Janes, baggy jeans and baseball caps that still had the tag on were in. Getting your tongue, belly button, eyebrow, and nipples pierced is cool. Everyone has piercings. Polar Fleece and Spiral Perms are popular. Tattoos were formerly the preserve of gang members, jailbirds and other rebels; they are now so common even the Spice Girls have them. You used to get a tattoo to stand out, now you get one to conform. Bling-Bling, blazed and back in the day. Chill out, chillin’ and “What up Dawg!” Hoochie, it’s all good, jack you up, pimpin and props. “Wassup” or just plain “sup.” Yadda Yadda Yadda, You be trippin fool, hottie.

People listen to Wannabe by the Spice Girls. They dig Nirvana, Mariah Carey, Beck, Dr. Dre, DJ Shadow, Wu-Tang Clan and more Nirvana. They check out Underworld the Beastie Boys and Metallica. They dig rap and by the end of the 90s, hip-hop became widely accepted. Kenny G plays fusion (ugh). If I could play like Kenny G, I wouldn’t. Miles discovers jazz fusion (cool).

Rudy Giuliani orders what proves to be a remarkable cleanup operation in New York City. The hip new sitcom “Friends “becomes an overnight sensation
Meanwhile, two Stanford graduates already have an eye on the future, creating a revolutionary search engine for a fast-growing tool: the Internet.

But it’s not all fun and games. BTK stands for “Bind, Torture and Kill.” Dennis L. Rader, the BTK Killer is later caught. So is The Green River Killer, Gary Leon Ridgway. So is Aileen Wuornos who violently killed male strangers along Florida highways over 13months in 1989 and 1990. Great police work.

Nancy Kerrigan wails: “Why, why, why?”Tonya pleads innocence. Former church lady Tammy Faye Baker got $75,000 to let “A Current Affair” televise her wedding in 1993? Live soap operas are alive and well, but Beavis and Butt-Head rule.

The invasion of killer bees never happened and acid rain backed off. YSK turned out to be a big “hole in the ozone layer “and Soviet nukes remained dormant.

The 90s is about the “dot-com bubble” about to burst on Bush’s watch in 2000. Bubba dodges that bullet. The period is marked by the founding (and in many cases, spectacular failure) of a group of new Internet-based companies referred to as dot.coms. Rapidly increasing stock prices, individual speculation in stocks and widely available venture capital creates an exuberant economic environment. Standard business models are replaced by a focus on increasing market share. Greenspan calls it “irrational exuberance” in 1996 and the markets rumble. Buffet says that if a B School student could explain it, he would fail him.

Michael Nunn’s fateful fight with James Toney in May 1991 took place at the unlikely location of the John O’Donnell Stadium in Nunn’s hometown of Davenport, Iowa. Leading on the cards by 97-93, 99-91 and 98-92, he got caught by a left hook from hell in the 11th round and just like that, it was lights out. It was a huge upset. “My God, he was kicking the snot out of the guy,” Angelo Dundee said. “And he got hit with an inside left hook. He didn’t see it.”

De La Hoya becomes synonymous with Pay Per View and vibes mega fights. He replaces Sugar Ray with his charisma and good looks but fights his image among his own people. He beats Chavez twice; he rules.

A man parachutes to the corner of the ring during a Bowe—Holyfield fight and starts a mini riot. The intruder is labeled “The Fan Man.”He later commits suicide for unrelated reasons. Holyfield wins by disqualification over Tyson after Iron Mike tries to bite Holyfield’s ear twice. Tyson is retaliating against Holyfield’s headbutts.

The self-destructive Andrew Golata gets disqualified for low blows against Riddick Bowe in the Garden. With no police in sight, a massive riot ensues while Lou Duva hyperventilates and rolls around the ring apron and Golata is hit on the back of the head by a telephone.. Golota becomes known as the “Foul Pole.” Incredibly, he again gets disqualified against Bowe for low blows in their rematch. His nickname is affirmed.

Bowe meanwhile becomes incident prone—from Tillery to the Marines and everything in between..

The late Charles L. “Sonny” Liston was inducted into the International Boxing Hall of Fame in 1991, quite an accomplishment for the 24th of 25 children who could not read or write.

In 1992, after nine years of inactivity and at age forty-seven, the once charismatic and highly popular Jerry Quarry fights and loses to unknown Ron Cranmer in Colorado and takes tremendous punishment. Early in 1999,he passes away at age 53. The cause of death is pugilistic dementia. The dark side of boxing remains alive and well.

Seemingly an unstoppable force and destined for a title shot, Ike “The President” Ibeabuchi (20-0) implodes and is convicted for attempted sexual assault and battery with intent to commit a crime stemming from an incident in Las Vegas in 1999.

Oliver McCall breaks down and cries against Lennox Lewis.

As the Cold War ends, Eastern European boxers loom on the horizon and are poised to make their mark.

The new millennium looms. Like the 50s moving to the 60s, things will get worse, far worse.

At least I had boxing to look forward to