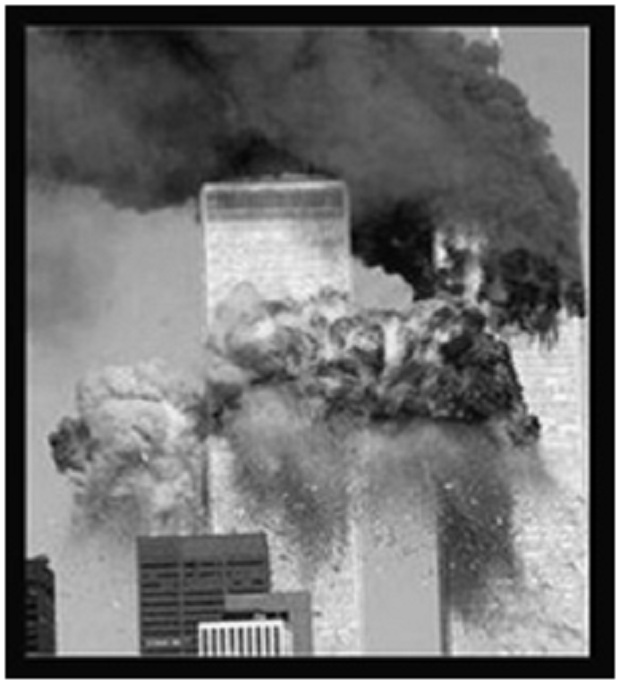 “I have come to the conclusion that whether or not a person is a
religious believer does not matter. Far more important is that they
be a good human being.”–Dalai Lama

9/11 and the sight of the second plane going into the Tower gives a new definition to horror in plain sight. Everyone will remember where they were when the second plane hits. Innocent Americans are killed. George W. Bush does the right thing and attacks the Taliban who harbor Al Qaeda terrorists. Its payback time and Americans want it badly. With carpet bombing and the Northern Alliance, revenge is achieved in Afghanistan. But Bush wants more and concludes, wrongly, that Iraq has weapons of mass destruction. Bush attacks Iraq as Iran watches the events unfold. Shock and awe makes for great theater. Body counts don’t.“Mission Accomplished” is a sign display, albeit a premature one, on the USS Abraham Lincoln as President Bush addresses the United States on May 1, 2003.

Bush miscalculates badly. We are still in Iraq in 2008 and over 4,000 U.S. soldiers have been killed by then. No one seems to understand Islamic culture. Secretary of State Condoleezza Rice gives stern looks to those perceived as enemies.

In 2004, an earthquake generates a monster Indian Ocean tsunami that ends up killing more than 225,000 people in many different countries

Hurricane Katrina hits in 2005 and is the costliest and one of the deadliest in US history. In New Orleans, the flood protection system designed and built by the US Army Corps of Engineers failed in 53 different places. FEMA director Michael Brown resigns in spite of having received praise from Bush with the phrase, “Brownie, you’re doing a heck of a job,” as hundreds die and thousands become homeless. Huh?

Geraldo Rivera of Fox News “tearfully” pleads for authorities to either send help or evacuate the thousands of evacuees. An exhausted and frustrated Shep Smith of Fox tells Bill O’Reilly “now you just wait a minute, O’Reilly” and immediately becomes a righteous dude, something Geraldo will never become. Mississippi Gov. Haley Barbour rocks; Gov. Kathleen Blanco of Louisiana does not. Mayor Ray Nagin is hard to read.

“We just learned of the convention center – we being the federal government – today.” –FEMA Director Michael Brown, to ABC’s Ted Koppel, Sept. 1, 2005, to which Koppel responded: “Don’t you guys watch television? Don’t you guys listen to the radio? Our reporters have been reporting on it for more than just today.”

Wild fires rage in California but victims receive more attention than those who suffered in New Orleans. Chalk it up to “lessons learned” or is it something else?

Movies like Mystic River, The Departed and Gone Baby Gone vibe Boston noir and are well received. So is the American Gangster with Frank Lucas. Daniel Day Lewis once again shows how talented he is. New Country for Old Men features a new type of monster.

Here comes the credit crunch and foreclosures. “Prime evil” fear permeates. The stock market goes down 360 points on October 19, 2007, exactly twenty years from Black Monday. Monster write-offs are taken at Wachovia, Citicorp, Merrill Lynch and other financial institutions and are scary as hell. The market begins the painful process of self-correction. Bear Stearns wobbles and is bought before a panic ensues. Freddie Mac and Fannie Mae need a rescue. Greenspan says “wipe out their shareholders.” Huh! It’s more bad news for Bush. Self correction won’t work in this crisis. He seems oblivious. What me worry? Paulson fills the breech.

Monday, September, 15, 2008 signals another Black Monday as the Dow loses over 500 points sparked by Lehaman Brother’s bankruptcy filing. Other institutions are on the precipice. This is ugly; people are plainly worried about their life savings as corporate leaders shamelessly depart with hefty severance packages as they are rewarded for their incompetence and failure. The giant insurance company AIG, is bailed out. Finally, Paulson comes up with a plan to stem the tide and get the toxic stuff off the table, but at what cost? Will it work? A trillion is no longer an unusual number. For the first time some even refer to a quadrillion. This is a paradigm shift of historic proportions. Could this be the end of capitalism as we have known it?

The former Pakistan Prime Minister Benazir Bhutto is assassinated on December 26, 2007 at a political rally in Rawalpindi. The world grieves.

People are openly challenging the religious right and blaming them for the chaos and turmoil that abounds under Bush.

Here come Hillary, she is female, hear her roar. Romney looks like the GOP’S man but falters. A guy named Huckabee is making some noise, but McCain comes on strong and rules the GOP. Obama is making the most noise. He seeks change; he is change. But his Reverend Wright is a millstone around his neck. After North Carolina, it’s Obama, Obama, OBAMA. Hillary hangs on as the 10th round begins, but she needs a knockout to win. She doesn’t get it. Obama, Obama, OBAMA.
It’s McCain vs. Obama. The debates begin. The signs go up. The inuendos fly. Iraq continues……. Iran looms.

In retrospect, history will be the judge.

I want to say to Tommy and I hope he’s listening. Give it up. You were former heavyweight champion of the world. You beat George Foreman. You should put that on your chest and wear it. No matter what people say, you were the heavyweight champ of the world so why continue to go out there and stress yourself out.––Larry Holmes

“Guys, there’s nothing like boxing and there are no athletes like fighters…..there’s no where else in sport you’ll find greater passion, greater intensity, greater courage, greater commitment, greater sheer guts, than what these two guys are showing you THIS IS BOXING AT ITS BEST!” —Jim Lampley

It started with Russian Kostya Tszyu, but then the Klitschko brothers emerge from the Ukraine. Russians Oleg Maskiev, Nikolai Valuev, Alexander Povetkin, and Sultan Ibragimov make their considerable mark on the heavyweight scene and so does Ruslan Chagaev from the Republic of Uzbekistan He beats the giant Valuev. Serguei Lyakhovich from Belarus loses the title to Shannon Briggs but Ibragimov wins it back. Bottom line: these guys are the real McCoy and have changed the boxing scene as the new millennium begins. Can anyone stop them? Can anyone restore luster to the heavyweight division? Maybe Nigerian Sam Peter can do it. If hard times breed hard men, then certainly places like Eastern Europe also breed hard men.

Floyd Mayweather Jr. rules boxing and beats Oscar De La Hoya and Ricky Hatton in mega fights. De La Hoya-Mayweather II is being lined up but Mayweather “retires.” Is Oscar wearing out his welcome? A kid named Pavlik excites boxing fans as he destroys opponents with a savage ferocity. But a guy named Margarito raises the bar when it comes to savage ferocity. His fight with Miguel Cotto is a classic. Paul Williams lurks. Something else looms and it involves lousy Pay Per View fights that should not be Pay Per View. Is this the future?

Joe Calzaghe beats Kessler in a global mega fight and then beats a still viable Hopkins and shot Jones.. A guy named Manny Pacquiao explodes onto the scene and thrills fans everywhere. He is the new “Mr Charisma.”

Barrera, Morales and Marquez rocked in the decade. Ward-Gatti do their trilogy and it becomes an instant legend, so does Diego Corrales-Jose Luis Castillo in 2005. Vazquez-Marquez savage each other several times Somsak Sithchatwal-Mahyar Monshipour in 2006 is one for the agesl.

The frenzy and violence of the decade was reflected in the following as well:

Mike Quarry dies of pugilistic dementia; he is only 55. Incredibly, Tommy Morrison is still fighting, and Saoul Mamby and Iran Barkley almost fought on some Indian Reservation in Idaho in February 2008. Mamby later fights off shore at age 60. The more thing change, the more they stay the same.

As the decade comes to a close, a new generation takes over and it includes names that are difficult to pronounce.

“Boxing is dead” has been heard since the second year of boxing. It’s been heard even in the very best of times. However, it’s difficult to keep a good thing down, and the decade of 2001 is proof of that.
Stay tuned for 2010-2020.