World Champions Jenifer Han (14-3-1, 1 KO) and Anabel Ortiz (20-3, 3 KO’s) both had successful outings this past weekend, defending their world titles on separate cards. 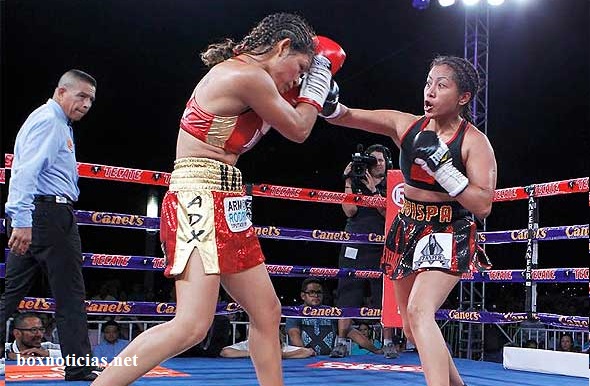 At Malecon Turistico in Sonora, Mexico, Ortiz extender her second world title reign with a wide unanimous decision over Katia Gutierrez (19-7, 4 KO’s) to retain the WBA minimum weight belt in her sixth defense. The champ outslugged Gutierrez over 10 rounds, with scores coming in at 99:91 twice and 98:92 all in favor of Ortiz. Azteca’s unofficial scoring had the fight scored a shut out at 100:90.

This was 10th consecutive win for Ortiz, who won the title from Etsuko Tada back in 2013. She also had a short run as the WBC title holder in the same weight division in 2009-2010. Gutierrez is a former IBF minimum weight champ, but has now lost three straight, and hasn’t had a win in a world title bout since 2012.

Jennifer Han fought in front of a hometown crowd at the Southwest University Event Center in El Paso, Texas, making her first defense of the IBF featherweight title against Calixta Silgado (14-6-3, 9 KO’s) of Colombia. The champ thoroughly out boxed her slower opponent, superior hand and foot speed allowing her to sweep the Colombian challenger en route to a unanimous decision by scores of 100-90 on all three judges’ scorecards.

The win was Han’s fourth straight, as well as her fourth consecutive bout in El Paso. She last fought in September winning the vacant IBF strap with a wide decision over former regional title holder Helen Joseph at the Don Haskins Convention Center. Silgado won her previous two bouts, but had lost in three prior world title attempts.