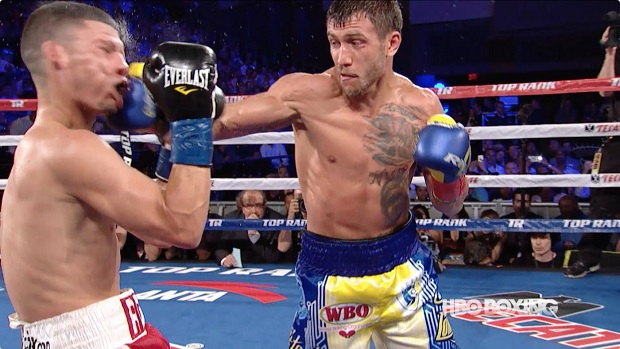 Everyone loves a knockout.  Even the most boring, sleep inducing contest can be saved with a few concussive shots to the dome.  There’s rarely a debate when a fight ends in this manner; it’s a punctuation on anything that had happened in the rounds prior.  With that said, here’s a look at some of the year’s best knockouts,  in reverse chronological order.  You can decide for yourself which one tops the list.

You can’t get away without mentioning this one.  This was Hopkins’ final in ring performance (or so we were told) and Smith, the WBC International light heavyweight title holder, was his opponent of choice.  In a fight that was closer on the scorecards than it should have been, Smith came up with a huge series of shots that sent Hopkins out of the ring and onto his back/head at ringside.  Citing a leg injury, Hopkins failed to beat the 20 count, giving Smith the biggest win of his career, his second huge KO of the year, and sets him up to possibly be named Fighter of the Year.

Duhaupas is the guy that went 11 rounds with Deontay Wilder last year and came in off a sixth round knockout win over previously undefeated Robert Helenius.  A left hand by Povetkin put Duhaupas flat on his back at the end of the sixth round.

One of the knocks on female boxing, according to the naysayers, is that there aren’t enough knockouts.  Well here’s a bonafide 10 count KO courtesy of Marcela Acuna, whose right hand to the jaw dropped and stopped Yesica Marcos, who was previously undefeated in 29 bouts and a former world champion for two organizations going back as far as 2010.  With the win for Acuna came the vacant IBF super bantamweight title, her eighth world championship.

Beltran really shined in this one, and connected with a counter left hook in the seventh round to stop Menard, who had scored stoppage wins over 10 of his last 11 opponents.  If anyone thought Beltran was on his way out, this fight gives them cause to think again.

With 12 losses already on his record, Molina wasn’t considered much of a threat to the up and coming Perez.  Molina almost made it to see the final bell, instead Perez rung his bell in the closing seconds of the sixth and final round with a looping right hand that ended the fight just about half a minute early.

Stevenson was our Fighter of the Year in 2013, the same year his near decapitation of Chad Dawson was our KO of the year.  Since then he’s gone 4-0 with 2 knockouts, all successful defenses of the WBC light heavyweight crown.  In his seventh  title defense against a former NABO title holder, Stevenson put and end to things with a short left hook that sent Williams face first to the canvas.

Martinez was in his third reign as the WBO super featherweight champ when he faced Lomachenko, a six fight pro who had already won the world featherweight strap and defended it three times.  A blazing left uppercut/right hook combo (blink and you’ll miss it) put Martinez down and out in the fifth.

Gassiev is now the IBF cruiserweight champ, but six and a half months prior to his title winning effort, he made quite a statement in his headlining bout on Fox Sports Premier Boxing Champions card.  The bout was step up for both fighters who both came in with impressive knockout ratios.  A left hook on the chin at the 2:48 mark of the opening round ended it all, with Shimmel out cold on the ring apron.

The outcome here was no surprise given Khan’s shaky chin; it wasn’t so much an issue of if Canelo would catch him, but when…and we all knew what was going to happen when he did.  In any case, this is one of the most chilling knockouts you’ll see.

Prior to the Beltran contest, Menard scored his own hi-lite reel stoppage.  This was his first of two KO wins of the year that put him in place for the aforementioned Showtime date against Beltran.  He made relatively short work of Bernardo, who came into the contest undefeated in 21 bouts.  A looping right hand froze Bernardo and sent him down, almost in slow motion.  The action was waved off at the 2:11 mark of round three.

Brant picked up the vacant WBA-NABA middleweight title in this ShoBox attraction, courtesy of an insane right hand that sent Perez halfway through the ropes, only to slingshot back into the ring, unconscious.  Brant’s scored two more KO wins following this bout.

Whatever your opinion is of Deontay Wilder, the WBC heavyweight champ knows how to stop a fight in dramatic fashion, and he kicked off 2016 with a bang.  In his third defense of the crown he won exactly one year prior (OK, it was one day short of a year), an entertaining scrap with the Baltic/International title holder came to halt thanks to a one shot- one kill right hand that stopped Szpilka dead in his tracks.  Szpilka hasn’t fought since, Wilder went on to stop Chris Arreola making all four of his title defenses knockout wins.