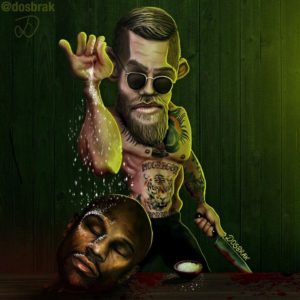 What if I told you that you that the Churrasco Guy from your local South American protein-centric meat house, you know, the guy who cuts dripping hunks of Brazilian barbecued Picanha at your table for $17 is now going to cook you an elaborate $459 French 3-star Michelin-style dinner (replete with generous helpings of Foie Gras Au Torchon, Sweet Butter-braised Maine Lobster and Pomme Maxim with a Red Beat Foam)?

Oh, and you’re going to pay for it.

Wait, wtf?” You may find yourself asking “Why would I want the Salt Bae guy from those memes a few months ago to do that fucking weird elbow salt sprinkle thing on all this expensive food? Wouldn’t it make more sense to have a French Michelin-starred chef make this elaborate fare if I’m going to have to pay full price for it?”

And fair play to the people who are able use their brain to generate a question like that.

Why on Flat Earth would we pay a premium price tag to have a guy (be it from roughly similar professions) do a job that he’s thoroughly unqualified for?

Because we are fucking dummies that’s why. We all share a primal need for violence, blood and a deep-rooted desire to live vicariously through our sports heros. We’re basically bloodthirsty, barely-evolved cavemen with iPhones and Amazon Prime accounts.

We see someone who’s different than ourselves going on about how much money they make or about how many mansions they have and we don’t like it.

We don’t like it at all and we’re not sure why.

We see professional athletes that could easily steal our girlfriends and who could physically dominate us in any concievable scenario. Our (flabby, no-push-ups-since-high school looking, literally like melted ice cream haphazardly mushed atop two twig-like spindly spider legs) bodies – and bank accounts – can’t compare to theirs.

It makes us jealous inside and we just want to curl up with our Coors Light Snuggie, re-watch Youtube videos of Dana White and Joe Rogan talk about how boxing isn’t “real” fighting like MMA is and polish off a big boy bag of Walmart jalapeño cheese poofs (not that $1.69, pussy bag, either; the extra big fucker for big fat fucking slobs such as ourselves).

We see things that we don’t like or agree with, or that somehow make us feel self conscious somewhere deep inside and we want to see them with a big ass black eye…or with a bloody nose, or better yet, knocked out cold, Paul Williams-style.

Perhaps Conor McGregor is your favorite fighter and in your eyes he’s the baddest man to ever walk this planet, you’re going to want to see him beat up that loudmouth Mayweather boxer pussy guy who constantly runs his yap about how he’s so rich and his undefeated record blah blah (I heard he owes the IRS 1 billions dollars!), am I right?

Or, maybe Mayweather is that fighter that makes you yell excitedly at the TV and at your wife if she happens to pass in front of the screen for a fraction of a second…And you know that Floyd should have got that gold medal in the 1996 Olympics, but was freakin’ robbed. You know he’s a five division, eleven-time world champion with over 20 championship world titles in his collection, and this fight with that crazy Irish MMA guy is going to be easy work, Money May all day, TMT for life.

After all, we are not really just talking about a random 0-0 fighter taking on this generation’s most successful boxer, are we? Conor McGregor is a guy that has used his presence, charisma and physicality to talk himself into the boxing equivalent of the lucky winning Powerball ticket.

Evidenced by his declaration of “We did it!” at the first Mayweather McGregor press conference, Conor McGregor knows that this kind of a fight is a once-in-a-lifetime dream come true and he’s using all of his connections within the MMA sect to sell semi-clueless fans on his chances of out-boxing a boxing legend.

And this event will sell incredibly well, too. Not to the same extent that Mayweather-Pacquiao did, but close, because 1/2 to 2/3 of all fight fans (in a thoroughly fictitious poll I didn’t do for this article) are desperately wanting to finally see someone shut Floyd Mayweather up.

With the UFC’s biggest and brightest star waiting in the wings to become boxing’s new pound-for-pound loud-mouth, rich asshole, the war of words (and viral McGregor dancing memes) is nearly over and now we wait to see what surely will be an entertaining spectacle.

Competitive boxing match? Not a chance, but fight fans do love a good circus, don’t we?