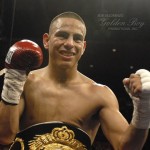 El Paso, Texas (Telefutura Solo Boxeo)-- Antonio Escalante (23-2, 15 KOs) avoided the drama of his last win, February's Fight of the Year candidate over Miguel Roman, by ealking right through veteran. Edel Ruiz (31-23-5, 20 KOs). The "kill blow" was a perfectly placed liver shot in the second. The bout was officially waved off at 1:52 of round number two. On the televised … END_OF_DOCUMENT_TOKEN_TO_BE_REPLACED